What we can learn from Costa Rica’s embrace of migrants 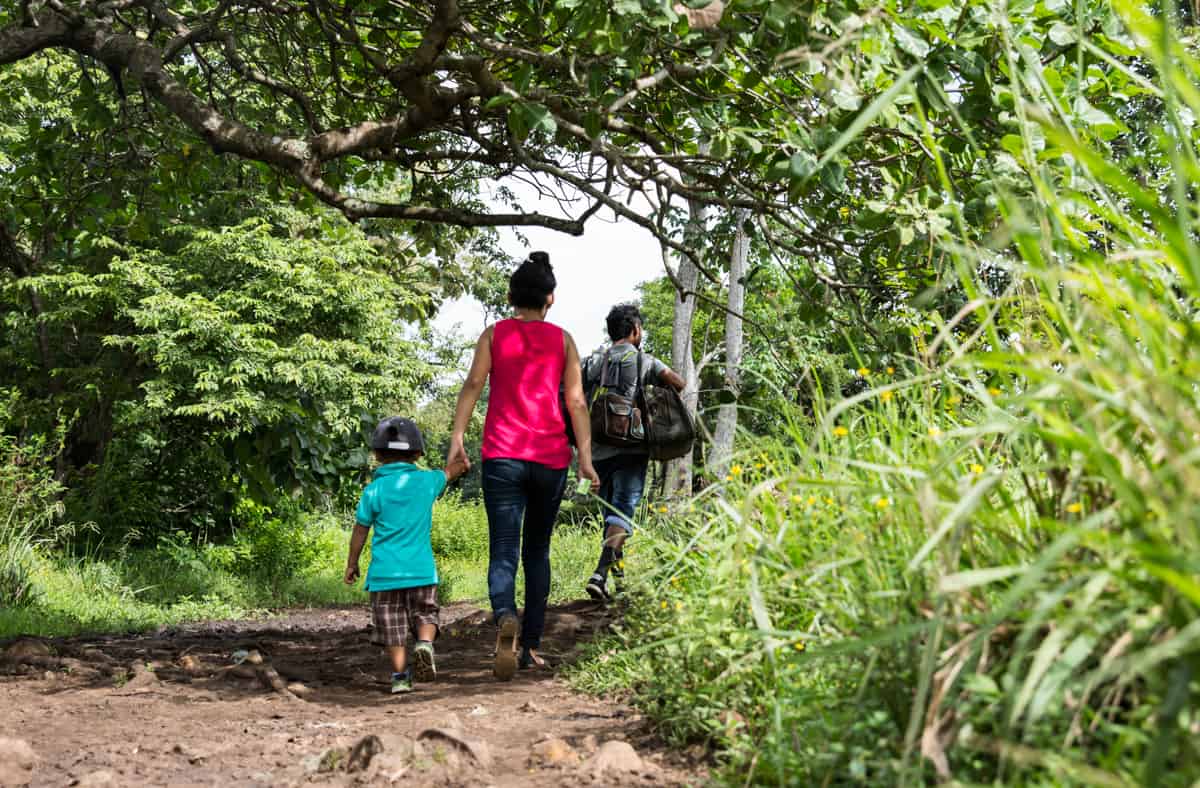 With darkness closing in around her in April 2018, Elizabeth, a 27-year-old Nicaraguan law student, clutched her 1-year-old baby in her arms as she waded through a muddy orange grove in northern Costa Rica. With only two changes of clothing for each family member and 2,000 córdobas — about $60 — in her pocket, she, her husband, and their two young children had caught the last bus out of the Caribbean town of Bluefields, Nicaragua, before government forces shut down all transit in and out of town and began a violent crackdown against peace marchers there.

As an intern in the Bluefields Prosecutor’s Office, Elizabeth had declined orders to prepare documents against a classmate who had been involved in a protest march. This made her, she says, a target for political retaliation from the Sandinista government of President Daniel Ortega. Now, as they fled through the night heading for the main road where they could catch a bus to the Costa Rican capital, San José, the little family hugged the trees so they could stay clear of the official border station.

In settling into life in a challenging new city, finding work, and starting the process to gain legal status, Elizabeth became one of a growing number of political exiles from Nicaragua putting their experience and activism to work in their adopted country.

The country she left behind, Central America’s poorest nation, would witness a reign of terror in the months that followed: Government forces and Ortega-aligned paramilitaries would kill more than 300 Nicaraguans by September of that year, sending tens of thousands of refugees into Costa Rica.

Aided by a Costa Rican government that has pursued a humane approach to the crisis, a number of the Nicaraguan arrivals have turned their difficult circumstances into a grassroots movement of sorts. They are supported by previous waves of Nicaraguan immigrants—some of whom arrived in the 1980s, political exiles of the Somoza family dictatorship, which held autocratic power in that country for 43 years. Young students such as Elizabeth, eager to transfer their activism to their new surroundings, have an opportunity to tap into a rich ecosystem of public-private partnerships.

“We’re Nicaraguans: hard-working people, with good values, with respect for others,” Elizabeth says. “We try to strengthen that part of our character so that we can put something positive into the world and defend ourselves through love.”

The Nicaraguan-led response to the refugee crisis is taking place across generations and socioeconomic groups. That diversity is on full display on a hot spring day in the parking lot and parish hall of a small Catholic church in north central San José known as the Iglesia de Ladrillo. Hundreds of migrants stand under the eaves or in the blazing sun awaiting social aid spearheaded by other Nicaraguans. Young political exiles, working as volunteers, bustle back and forth, jotting down information on Post-it notes for beneficiaries.

The people these volunteers are serving are economic migrants, people from a newer wave of displacement that began once Ortega’s political crackdown led to economic collapse. At this monthly event, they are sorting through donations of toys and clothes that have been collected by Nicaraguan youth leaders, part of a group called Young Christian Migrants. At the same time, a nonprofit called SOS Nicaragua is registering them for monthly food allowances.

Carlos Huezo, president of SOS Nicaragua, wends his way through the volunteers. His organization grew out of an impromptu, but passionate, response to the first waves of political migration. Himself a Nicaraguan refugee from the 1980s, he and others like him understand well what these new exiles are going through.

SOS began by working with shelters and a hotel to provide beds for the influx of migrants, says Huezo, who owns a restaurant in San José. As the crisis continued and economic migration climbed, it shifted its focus to providing food—raising about US $8,000 a month for supplies delivered by an all-volunteer staff.

As the COVID-19 crisis hit this spring and has continued to evolve, the organization’s workload intensified. SOS Nicaragua is raising money and coordinating efforts to get food, hygiene kits, and fabric masks to refugees living in crowded neighborhoods and homes, a condition Huezo described as “gravísima” — dire.

While SOS attends to refugees’ immediate needs, another Nicaraguan-led effort is focused on their education. Just a few blocks away from the red-brick church, the Latin American University of Science and Technology is working with refugees who have earned scholarships from the university and from the Humanitarian University Grant program. HUG is the brainchild of another Nicaraguan-born business leader, Margarita Herdocia.

Herdocia says that while she has been working to support Nicaraguan migrants for years, she saw an even bigger opportunity in the 2018 crisis: to shape the next generation of Nicaraguan leaders. Today, the HUG-ULACIT partnership is putting 23 scholars through school, ensuring that they give back through volunteer opportunities and surrounding them with social capital—connections, events, and mentorship from leaders in Costa Rica—to help them advance in their chosen fields.

“It takes a lot of guts to say, ‘I am going to leave a broken relationship,’ whether that is a marriage or a country,” she says.

She has made mental health an important part of her approach. Depression, anxiety, and insomnia are common within the Nicaraguan refugee community. Many people face xenophobia and economic uncertainty, and most have family members still in danger in Nicaragua.

That’s why Herdocia organizes support groups with her HUG scholars, leading the students in meditation and structured reflections and conversation—all protected by the motto nada, nunca, a nadie—not a word of what’s said here, ever, to anyone.

“The sessions have helped me get things off my chest,” HUG scholar, José Andrés, 22, says. “They help me feel sad (in the moment) so I don’t have to feel sad later. It’s been a chance to cry and feel vulnerable… I fall so I can get up and be stronger.”

The stories of refugee students demonstrate the trauma they’ve faced. In the busy church hall, José, 22, one of Herdocia’s HUG Scholars volunteering at the event, tells of fleeing his Indigenous community of Diriá after organizing protests in the Nicaraguan capital, Managua.

“When I crossed that border, it was an exodus,” he says. “Coming in with nothing more than a backpack and just a few clothes represented that I was carrying my dreams and my aspirations. But when I crossed the border, I felt that part of my life and part of my story had been left behind.”

René, 27, another volunteer, says he watched his parents clamber over a border wall to enter Costa Rica as Ortega’s onslaught continued. His mother was a longtime member of the resistance to Ortega’s Sandinista government. She and her husband, both doctors, had been running a clandestine hospital in their home when Ortega closed the hospital and sent his police forces to beat down opposition movements in their city of Masaya. “It didn’t feel good, after their lifetime of work, to watch them leave the country like that,” he says.

He gestures toward the crowded parish hall: “We’re putting on a good face here.”

Migration as a Solution

The students and refugees they were serving this day are part of the huge wave of Nicaraguan migrants who arrived in this country in a short period of time. Between 2017 and 2018, the number of Nicaraguan migrants increased from 1,662 to 30,023. As of May 2020, the total refugee application pool had reached 97,804.

So how has Costa Rica, a country of 5 million, been able to accommodate more than 28,000 migrants in just one year—providing solutions to Central American migration even as caravans of refugees, asylum-seekers, and other migrants were making their way to the southern U.S. border? And how has it served as a breeding ground for such powerful immigrant activism?

The answer, or at least part of it, lies in successful networking among different waves of migration. Previous waves of political exiles such as SOS’ Huezo mobilized quickly as the crisis unfolded. And because many of those who fled Nicaragua had been targeted because of their activism, they became natural candidates for continued leadership once they arrived in Costa Rica. More than 10% of the population in Costa Rica comes from Nicaragua, and that presence meant that many new migrants could find temporary housing with family members already in the country, reducing homelessness. What’s more, the country’s long tradition of receiving immigrants, coupled with the election of a progressive presidential candidate in May 2018, facilitates public-private partnerships.

It helps, too, that in a country under deep financial stress, prominent and influential figures expound the benefits of Nicaraguan migration from an economic perspective. Costa Rica reached its highest deficit in 40 years in 2019, and that was before the global pandemic and suspension of tourism—its largest industry—has significantly worsened its economic woes.

However, Miguel Gutiérrez-Saxe, founder of the widely renowned State of the Nation, a research and innovation center focused on human development, says that the demographics of Nicaraguan immigration fit perfectly with Costa Rica’s needs as its plummeting birth rates have sent its pension system to the brink of bankruptcy.

“We’re moving to an elderly population,” Gutiérrez-Saxe said. “To combat this problem, we need a significant increase in productivity, which appears unlikely… or an increase in the workforce. Migration becomes part of the solution, not part of the problem.”

Herdocia, of HUG, says that the most important lesson of the Costa Rican situation is the immense power that migrants carry with them to create change, if only they are given the space and support to show what they can do.

People such as Elizabeth, who spent her first months in the country signing up her family for benefits their refugee status entitled them. The process took nearly a year, and she found herself using her training as a law student.

She says she noticed the harried faces of the public workers in charge of the long lines, as well as the inability of some beneficiaries to express what they needed. Before long, she was working with the leadership of the nonprofit, Transforma, to coach others on how to get health insurance and other forms of social aid they are owed.

The first beneficiary of this coaching, Rosita, successfully received benefits after failing to get them during 25 years of living in Costa Rica. Elizabeth coaches other women, too, Costa Ricans and migrants alike, who need help accessing public service in the famously bureaucratic nation. The work, she says, has helped redefine her life mission and put her harrowing flight from Nicaragua into perspective.

Now she understands, “what [that] was all for,” she says. “My [law school] studies—I liked it, but I felt empty. Everything I provided was just for me. Here, my thinking changed. Here, I found myself.”

This story originally appeared in Yes! Magazine and was republished with permission under the Creative Commons license.