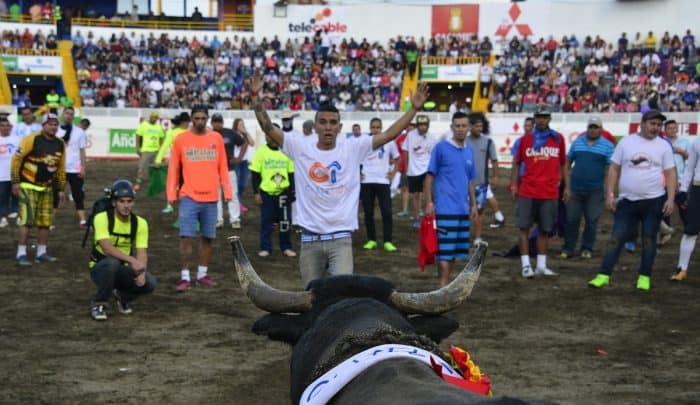 PHOTOS: The agony, the ecstasy at the Zapote bullfights 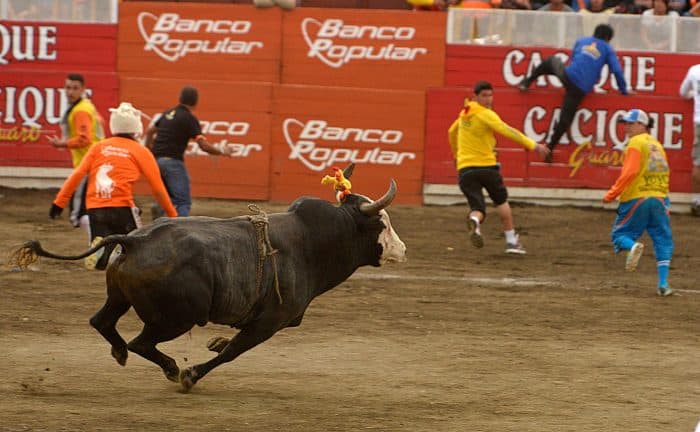 VIDEO: Festivities wrap up in Zapote 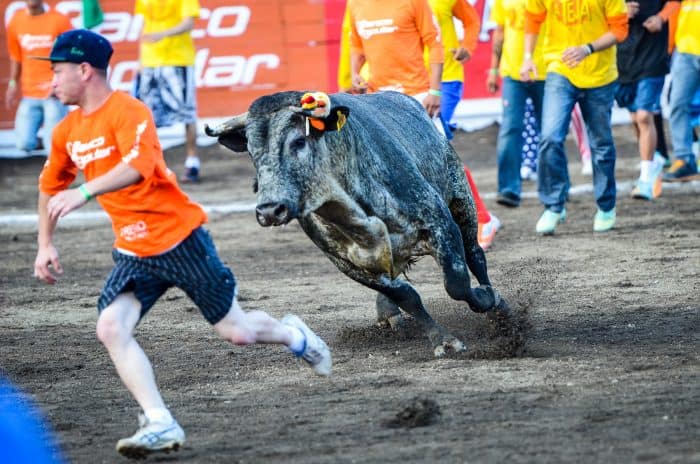 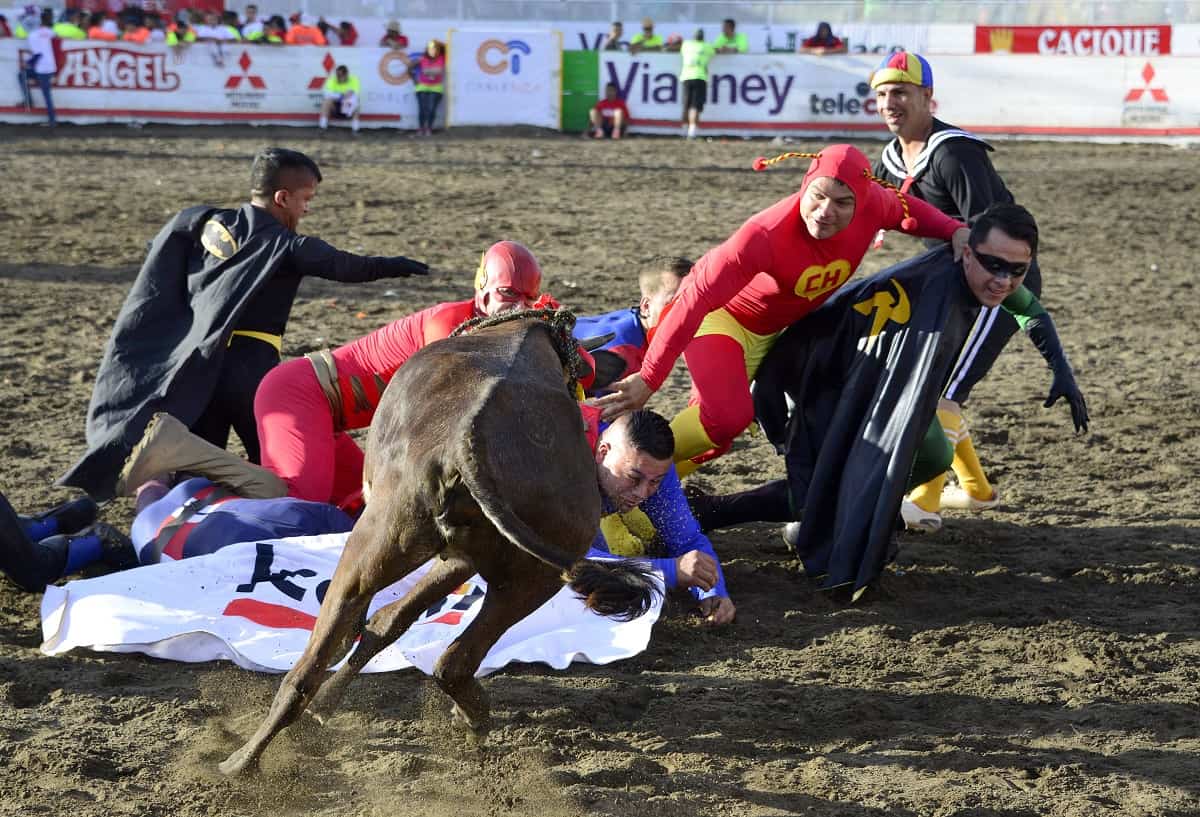 Amateur bullfighters are rammed by a bull at Zapote on December 28, 2016. (AFP PHOTO / EZEQUIEL BECERRA)

Three people dressed as Batman, Chapulín Colorado and Superman move expectantly among a small crowd until a bull comes out in a rage and pursues them.

They all run, and some take refuge behind a barrier, but others approach the animal to provoke it further. Around them, in the bleachers, thousands of spectators applaud each time the beast attacks one of the improvised bullfighters.

The scene is part of the “toros a la tica,” an essential ingredient in San José’s end-of-year festivities and one of the most controversial traditions in the country. It takes place this year from December 25 to January 6.

In Costa Rica, it is forbidden to kill the bull in the bullfights. Instead, what the public celebrates is when the animal attacks one of the bullfighters.

In the arena, some 40 improvised bullfighters, almost all men, are the main actors of this bullfighting show. Some are disguised as superheroes and others as clowns, but all come in search of adrenaline.

“Just as there are people who like to parachute, we look for strong emotions; it’s a passion, and one ends up falling in love with this tradition,” José Luis, a popular bullfighter known as “El Gemelo,” told AFP.

Novices and veterans, men and women, all can participate in the run if they have signed an insurance policy, like the young Kenli Cisneros, who arrived at 5 a.m. to register at the Zapote ring in the southeast of San José.

“It’s my first time as an improvised bullfighter,” she said. “My husband had been waiting for me for more than 12 years to join him in the ring.”

Although most participants flee from the bull, the most reckless play with the animal to provoke it — such as “Batman,” who stole the show by dodging the beast with agility.

Others, like Greivin Rojas, an improvised bullfighter for six years, could not be saved from “el Ratón,” a bull of about 450 kilos that managed to attack him.

“I’ve taken scares, but it’s the first time the bull grabbed me and did not let me go,” said Rojas, still breathless after escaping the goring.

Although Rojas was able to leave unharmed, more than once the participants finish hurt. In 2017, the Red Cross assisted about 350 bullfighters during the 13 days of San José festivities.

“Last year, a boy had half his head torn open,” said “El Gemelo,” who has more than 30 years participating as a bullfighter.

The bullfights in Costa Rica go back to the colonial era, when they emerged together with the development of livestock and Spanish influence. An amateur bullfighter is charged by a bull during the Zapote Feasts, an end of the year holiday celebration in San Jose, on December 28, 2018. (Ezequiel Becerra / AFP)

Although the bull cannot be killed, Costa Rica remains one of the few Latin American countries that preserves the tradition of bullfighting.

In the bleachers, the euphoria is more than present. The audience applauds, sings, bursts with laughter, screams with fright and even with pleasure when the bull reaches a bullfighter.

Among them are Fiorella and her family, who for 11 years have been attending the event without fail.

“I come to have fun,” she said. “Even if you’re not in the sand, you feel the adrenaline that they feel.

In parallel to the passion that this tradition awakens, activists protest against the mistreatment of the bulls.

Yayo Vicente, president of the Animalist Party of Costa Rica, believes that bullfighting is a tradition charged with violence.

“In theory, you cannot mistreat the bull, but it is almost impossible not to mistreat it even if the animal is not killed,” Vicente told AFP. “The bullfights are quite harmful for the health of the bull.”

Vicente stressed that in the bullfights “the bull will hyperventilate and have hormone levels that indicate excessive stress.”

Although they are considered a tradition of the country, Vicente also considers that children should not be exposed to this type of spectacle, which in his opinion reinforces macho behavior.

The animal rights activist is convinced that the key to stop perpetuating that tradition lies in changing the mentality of the new generations.