Nowhere to go: A day at a Costa Rica migrant shelter 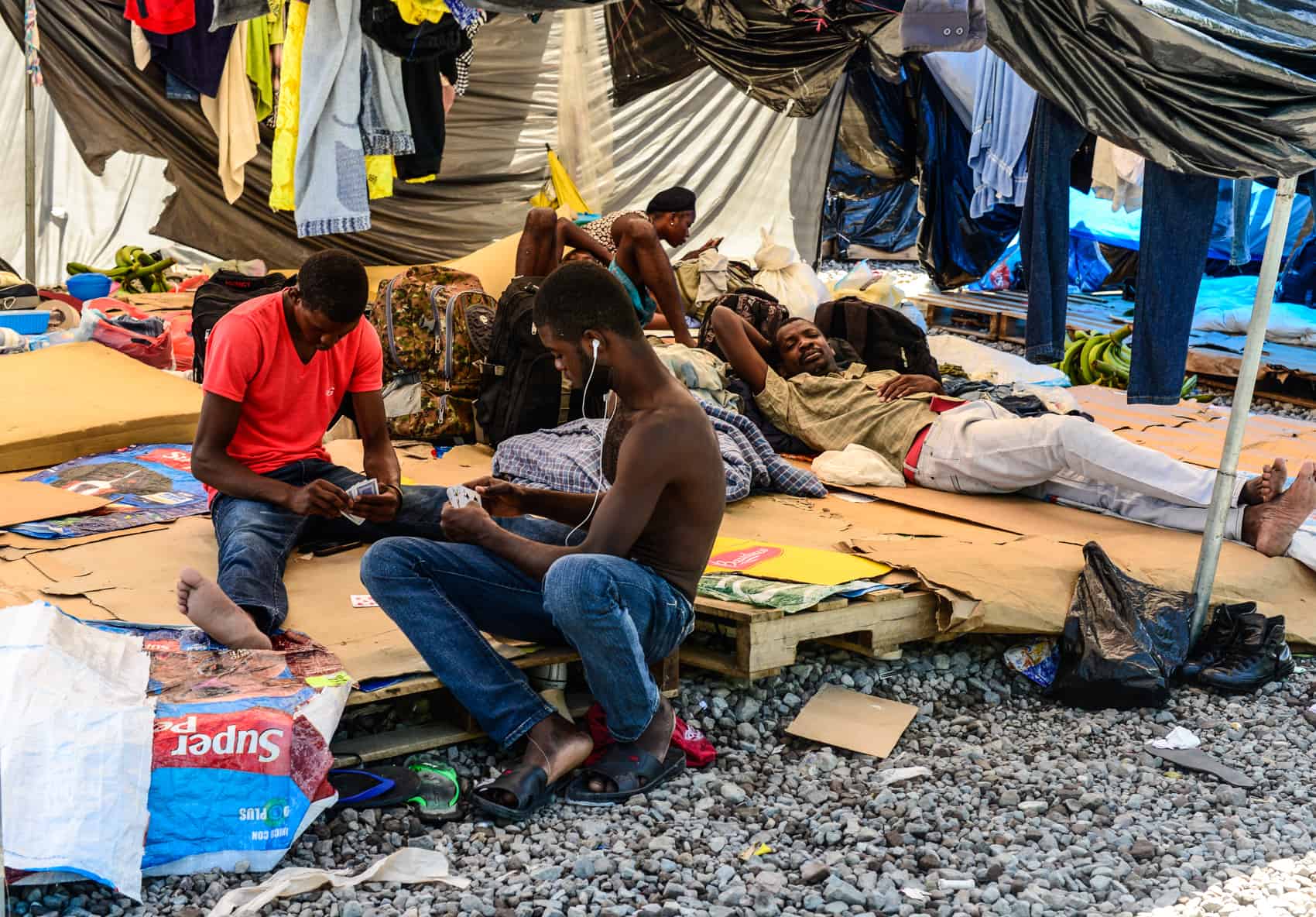 PASO CANOAS, Puntarenas — As the sun comes up people start to line up outside the mobile immigration processing center at the Red Cross camp just steps away from the border between Panama and Costa Rica.

By 8 a.m. the sun is already high in the sky and there are 20 people from Africa and South Asia standing or sitting in the shade of the tent. These are new arrivals, migrants who arrived illegally during the night and are now waiting for immigration officials to interview them, take their fingerprints and issue them a piece of paper that gives them legal permission to travel freely in Costa Rica.

This has been the routine here since May, when the Costa Rican government started giving safe-passage documents to people trying to reach the United States from around the world.

As the migrants wait, a small team of Red Cross paramedics drives in to the camp with an ambulance for anyone in need of medical care. Each day, local volunteer groups bring a simple breakfast and dinner, mostly rice and beans.

This morning, people are washing up with a hose at the gate of the fairgrounds, where the camp is located. A Costa Rican vendor pulls up his cart to sell coconuts to a few people who can afford the small luxury.

A group of women laugh as they walk past a morose young man smoking a cigarette, leaning against the camp gate. A sign immediately outside the gate advertises rooms at Hotel El Descanso.

According to Red Cross estimates, roughly 2,000 migrants have passed through this camp since late April and many thousand more could be on the way. The International Organization for Migration told daily La Nación last week that as many as 20,000 migrants from African and other nations could be making their way though the Americas this year to reach the United States or Canada.

The vastness of South America’s jungles and mountains disperses the flow of immigrants across a wide area. But the Central American isthmus is a bottleneck.

Just months after thousands of Cuban migrants were waylaid here when Nicaragua refused to let them pass, Costa Rica finds itself once again playing the unwanted role of host to thousands more people hoping to pass through on their way north, this time from Africa and elsewhere.

With no visas, no official identification documents and a tough no-entry stance from Nicaragua, many migrants here see no way forward — besides risking their safety with a smuggler. As Central and South American countries seek a regional solution, migrants here say they’re running out of money and becoming increasingly desperate. This baby is among the migrants stuck at the Paso Canoas border camp. Lindsay Fendt/The Tico Times

Frank Didier, a 27-year-old man from Ivory Coast, watches the scene from the shaded stoop of the $10-a-night room he splits with his friend Mattieu Komlou from Togo. He’s been here for five days now but he’s staying put until he hears the Nicaraguan government will let people pass. It could be a long wait.

Didier and Komlou are on their way to Washington, D.C. “We’re going to see Obama!” Komlou jokes with the group of four other migrants who have gathered around the stoop.

The U.S. was not Didier’s first choice. He says he had been trying to get to France, where he has family and friends, since 2006 but his visa application was denied four times. “Europe doesn’t work for Africans,” Didier says. “It’s easier for America to accept us.”

Getting this far has been grueling. Didier says he paid $1,700 to fly from Ivory Coast to Ecuador. From there, he says he traveled what is now a well-worn path through Ecuador, Colombia and Panama to reach Costa Rica.

Didier and many migrants in the Red Cross camp say that Colombia has been the most dangerous part of their trip so far. Didier says police officers robbed him. Komlou says an officer stole his watch.

Others have stories of smugglers who robbed them or abandoned them in the jungle.

Once in Panama, Didier says he hired an indigenous guide who charged $20 a head to show him through what he calls “the forest.” It’s not clear if Didier crossed the Darien Gap — a lawless stretch of mountainous jungle shared by Colombia and Panama that has no roads — but he says he walked through the jungle without food for four days.

When he made it out he encountered a Panamanian police officer. “I tell him, ‘Kill me now if you’re going to send me back,’” Didier says. The officer told him to report to Panama City for deportation.

He ignored the order and continued on to Costa Rica.

“Thank God we made it through healthy,” Komlou adds.

Not everyone does. Red Cross Captain José Obando says many of the recent arrivals to the Paso Canoas camp are dehydrated, exhausted and sick. Some arrive barefoot, their feet riddled with fungal infections and worms, Obando says.

Of the several thousand people who have been through this camp since April, Red Cross has administered aid to nearly 800. Of those, 600 had to be sent to an urgent care clinic.

Word has been moving through the camp that a 4-year-old girl from Pakistan died crossing the Darien Gap. A Red Cross worker showed The Tico Times a photo supposedly of the girl that has been bouncing around the camp on WhatsApp.

The smartphone screen flashes an image of a small child lying facedown on a fallen tree. Komlou says he heard the mother committed suicide out of grief.

People standing around the phone shake their heads at the thought of losing a child on the journey. Someone points out that a 6-month-old girl arrived in the camp the previous night with her mother. Arias believes many of the migrants he has interviewed are from Haiti, despite their claims that they’re from “Congo.” When asked which Congo they’re from — the Republic of Congo or the neighboring Democratic Republic of Congo — some are stumped. One woman, when asked this question, simply shrugged her shoulders and laughed, Arias says.

Immigration officials here rely on one interpreter to help communicate with the many French, English or Portuguese-speaking migrants.

Many of the Portuguese speakers may have learned the language after spending several years in Brazil. Some are likely Haitians who fled the island after the devastating 2010 earthquake. Others are Africans who moved to Brazil looking for economic opportunities during that country’s boom years. But they’ve recently been dislodged by Brazil’s worsening recession.

Arias and other officials interview the migrants, take their fingerprints and issue them a small un-laminated white piece of paper about the size of a business card. This allows them to move freely in Costa Rica so long as they check in with authorities every 15 days.

Once they are processed they are free to go. But some stay. With news that Nicaragua won’t let them pass, they see little reason to leave. The safe-passage card is good for traveling inside Costa Rica, but not for much else. It is not legal identification and cannot be used to receive wire transfers.

Didier worries about what people without a way to replenish travel funds might do if forced to spend down their money waiting in Costa Rica. He speculates that people may have to turn to prostitution or theft to make ends meet.

To be clear, Paso Canoas has not experienced an increase in crime since this new wave of migrants began arriving, according to Communications Minister Mauricio Herrera. Border Police confirmed this to The Tico Times during a recent patrol.

See also: On patrol with the Costa Rican Border Police

Though the camp at Paso Canoas provides basic shelter and food, it is not a place anyone would want to stay long. People sleep on foam slabs laid on wooden palettes to stay off the ground. The Red Cross tents are wrapped in black and blue plastic tarps to keep out the rain. When it rains, parts of the camp flood.

If a large group of new arrivals shows up, there could be a shortage of tents.

A more permanent facility is in the works just south of Río Claro, Puntarenas that will be better able to accommodate these travelers. Communications Minister Herrera told The Tico Times earlier this month that the government hopes to close the Red Cross camp soon, but that hasn’t happened yet.

Because of the wide range of religions represented in the camp, Red Cross Captain Obando says the cooks avoid beef and pork. “That leaves chicken, which thankfully is cheaper,” he says.

Didier and Komlou take their meals in the camp to save money. For now, they have enough savings to pay for the hotel room they split, but both are anxious about the time and money they’ve spent here.

When The Tico Times asks Komlou if he would consider crossing into Nicaragua with a smugger he says, ‘No.’ The $700 to $800 that smugglers charge at the Nicaraguan border is too expensive and risky, he says.

Another man from Togo, Patrick Yao, agrees. He says he’s tried to cross into Nicaragua three times and been turned back every time. “You can pay but there’s no guarantee you’ll get across.”

Didier wonders aloud why Nicaragua won’t let them cross. Didier, who is Catholic, ponders whether Pope Francis could intervene on their behalf.

But there is a much bigger question that no one really wants to talk about. Even if the migrants are able to get through Nicaragua — and the rest of Central America and Mexico — what are their chances of getting into the U.S?

“It’s sad,” Red Cross Captain Obando says, shaking his head. “There’s no law in the U.S. for them like the Cubans. For many of these people, they’re never going to reach their goal.”

Watch a video of the migrant camp: