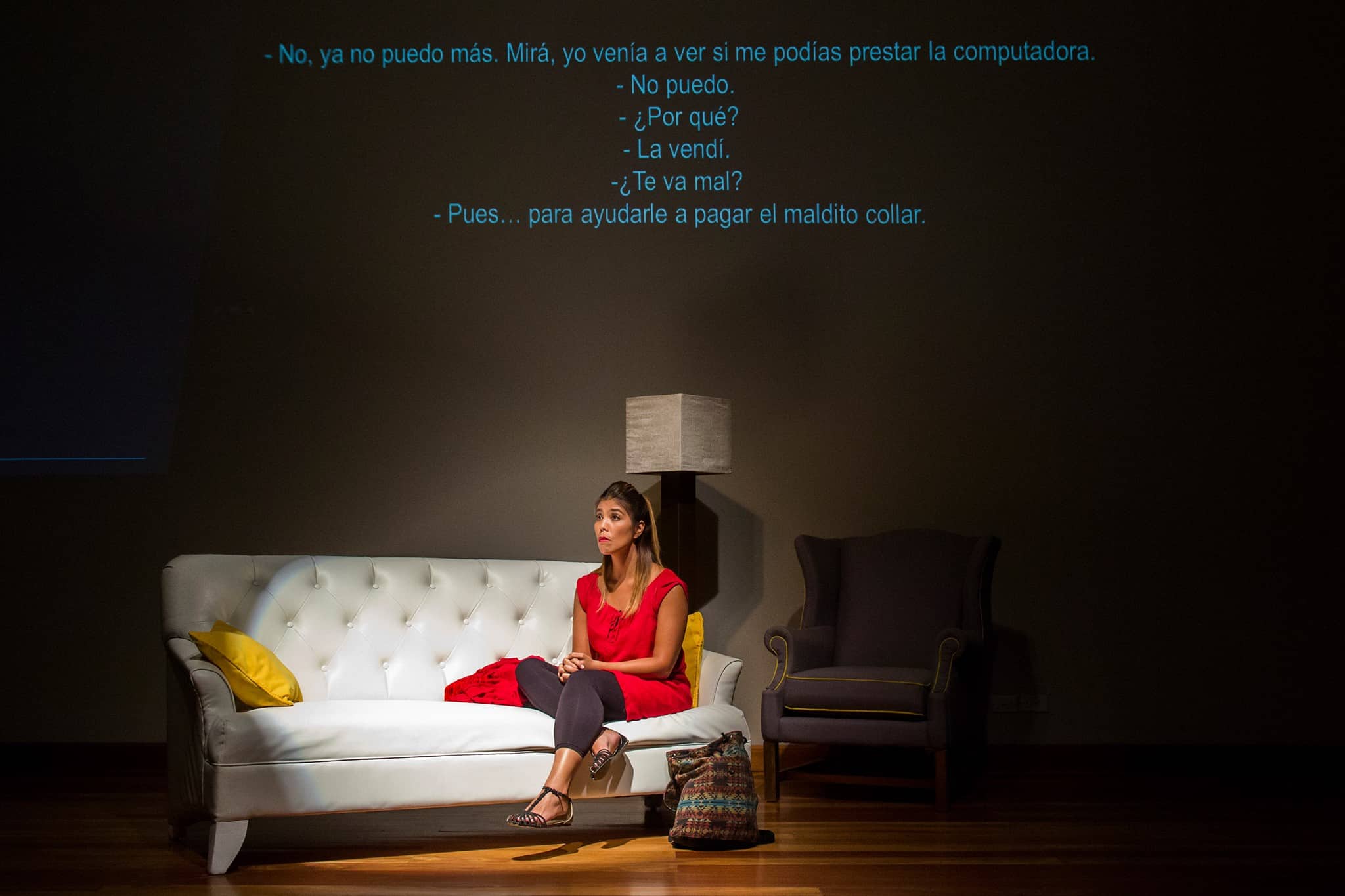 Marian Li has long juggled two worlds. She spent 10 years in Paris in her late teens and early 20s, then returned to her native Costa Rica at the age of 26. She taught French, worked on TV series and commercials, videoclips and short movies, and had a small role in Esteban Ramírez‘s film “Gestación.” Her real dream, however, was to go back to Paris to start her artistic career there, and eventually she saved up enough to do just that: she sold all of her belongings, quit her job, and used what she had saved to go back to France and enroll in acting school in Paris.

Li visited Costa Rica recently for a Jan. 14 presentation of her monologue “Baby Boom au Paradis,” her translation to French of a play by famed Costa Rican dramaturg Ana Istarú. The Tico Times talked to the actress about how her career began and the challenges she faced within the Costa Rican film industry. Excerpts follow.

How did you start working as an actress in Paris?

In Paris, I had to do a lot of different “job-jobs” [to pay the bills], but I ended up working for one of the biggest French directors in the world: Luc Besson (“The Fifth Element,” “The Professional,” “Lucy”). Not bad for a job-job! At the end I was working as a Production Assistant for Europacorp, his company, and learned a lot about making movies, I met a lot of people. My office was located in the heart of “La Cité du Cinéma,” which is called “Hollywood sur Seine” because these are cinema studios where huge blockbusters have been shot: “Lucy,” “The Family,” “Transporter 4,” “Taken 3,” “3 Days to Kill.” Most recently, [it’s been home to] “Jackie,” a biopic about Jackie Kennedy starring Natalie Portman, and the next Besson film, Valerian, an animated sci-fi movie. So I have met a lot of stars like Robert De Niro, Michelle Pfeiffer, Tommy Lee Jones, Kevin Costner, Jean Reno, and Jean Dujardin. I was able to be part of those big productions both as an actress and as an assistant. I was even hired as a Spanish-language acting coach for Scarlett Johansson while she was shooting “Lucy”!

I don’t work there anymore as I started my own production company, Generic Group, to produce my own projects (“Baby Boom au Paradis,” “Mata Hari,” a few short films, and also my two rock bands, because I am also a rock singer and I really want to do some gigs in Paris. The purpose of this company is to create more jobs for female artists, whether they are filmmakers, actresses, singers, scriptwriters or theater directors, and also to translate plays or scripts written by Costa Rican authors into French.

What do you consider has been your best and most challenging role so far?

The monologue I came to perform in San José on Jan. 14, by Ana Istarú. I’ve been performing this monologue for about a year now, including two and a half months in Paris. The show I did in the Museo de Jade’s auditorium was organized by the Alianza Francesa de Costa Rica and it was a huge success: full house and ovation! So, I might start a tour around Central America as well. Playing Ariana is very challenging: she really wants to have a baby with her husband and she experiences all the adventures of a pregnant woman, from not being able to get pregnant immediately, to the ultraounds, to the relationships with the in-laws and medical staff, ,until she gives birth at the end. I have never been pregnant myself, so I had to learn all I could about pregnancy and try to find all the emotions inside of me that could match Ariana’s. “Baby Boom” demands joy, despair, frustration, jealousy, happiness, anger, and so on, so it can be very exhausting, psychologically speaking.

I am also preparing another huge role for a new monologue I’m doing next year. The play talks about Mata Hari, the famous dancer who was executed in 1917 in Paris, condemned for being a spy during World War I. I guess this role is probably going to be as hard as Ariana’s, or maybe harder, because Mata Hari is in jail the day before her execution and she knows that she is going to die.

Do you consider yourself more a theater or film actress?

​Acting for the camera and acting in a theater is basically the same, and at the same time it can be so different! It is the same because acting is just acting; an actor finds, in the depths of his humanity, the sincerity and the true emotions that the role requires. But at the same time it is different because we’re talking about two different ways to tell a story, two different artistic languages. My first passion is cinema. I used to go to all the movie festivals and really wanted to work in movies; that’s how I started acting in Costa Rica. But since I decided to produce my own projects, I wanted to start with a play I could easily produce. The contact with the public is extremely rewarding in theater, and also the fact that the play has a chronological order makes the acting job easier. In movies, considering you shoot the scenes in a non-chronological order, it makes it a little more difficult, especially because the director is not directing you. Sometimes he is not even on set with you, which is absolutely not the case in theater where the director is really directing you all the time. Still, in the future I would really like to shoot more movies.

What is the main difference between being an actress in Costa Rica and being one in Paris?

Being an actor is hard anywhere in the world. Being an actress is even more difficult because roles for women are very limiting: the prostitute, the sexy lady, the sexy policewoman, the perfect wife. But being an actress in Costa Rica might be easier in one way than in big countries: there is almost no competition! The market is just starting, so you get to do more interesting things. When I was acting in Costa Rica, I was working as a lead actress most of the time on TV and in short films. (In Paris, I had to accept being an extra in movies, and I can tell you that when you are casted as an extra you are really, really happy because it is so hard to get there. In Costa Rica, even if you don’t get paid, or not much, you can more easily find yourself as the lead in a movie that might go to the Berlinale or the Cannes Film Festival. In Paris, it is extremely hard just to get a phone call from a casting director, so, I have been very lucky so far.

In my case, I left Costa Rica because nobody was hiring a half-Asian actress. Costa Rican directors are not writing for actresses who have atypical looks like me. I am considered “exotic,” a foreigner. They prefer, of course, more “Costa Rican-looking” actresses. I was told many times, “Your acting is perfect but you don’t look like my character.” One day I was told, “You are way too beautiful,” and the next day I wasn’t “sexy enough” to play a part!

Also, Costa Rican directors, both female and male, still prefer to hire non-actors than professional actors. If they’re looking for a prostitute, they will go and look for a real one in the streets rather than giving a chance to professional actors like me to do their job. In Paris, on the other hand,  they hire only  actors; it’s the law, because they know that’s our job, to transform ourselves into a character. Costa Rican filmmakers I have met suffer from lack of imagination, I guess, or aren’t really able to direct an actor in order to help the actor to become the character. That’s why I had to leave Costa Rica for a bigger country where there is more variety in the characters that are being created both in movies and in theater, and where they hire actual actors to do the job we are supposed to do.

What’s your advice to rising actors in Costa Rica?

I don’t really have the authority to give any advice to anyone, but I would say: Take acting lessons seriously. This is a professional job. Always ask to be paid somehow, in-kind or money, and most important of all: do your own thing! No one is going to come and look for you. About 99% of actors aren’t famous and are actually having a hard time finding a job, and most of them are starving. Only 1% of actors are celebrities. Another few are able to make a living out of acting, but they’re unknown, which means you have more probabilities to win the lottery than being a famous actor. So, do your own projects!

Oh, and another thing: choose this profession if and only if you are willing to accept to live with all the disadvantages related to this job: lack of money, economical instability, high rates of unemployment, a market that only recognizes you  if you are already “bankable” and if you have important and powerful friends. You are judged for your physical appearance all the time. If you are fine with all that because acting is the most important thing in your life, and you are fine with all the disadvantages, then, you definitely are an actor. Then you can enjoy the advantages: your work is fascinating. Your material is yourself, your body and your emotions. Onstage you get to feel things you can’t feel in real life. You have to be politically incorrect, to actually enjoy it, and the best thing is that you get paid for that! The contact with the public is just amazing. It’s like a drug.

In my case, I am the happiest woman in the world because I am doing what I was born to do. Nothing else matters. There’s nothing I like the most than letting my inner truth emerge, my weaknesses, my fears, my vulnerability, under imaginary and fictional circumstances.