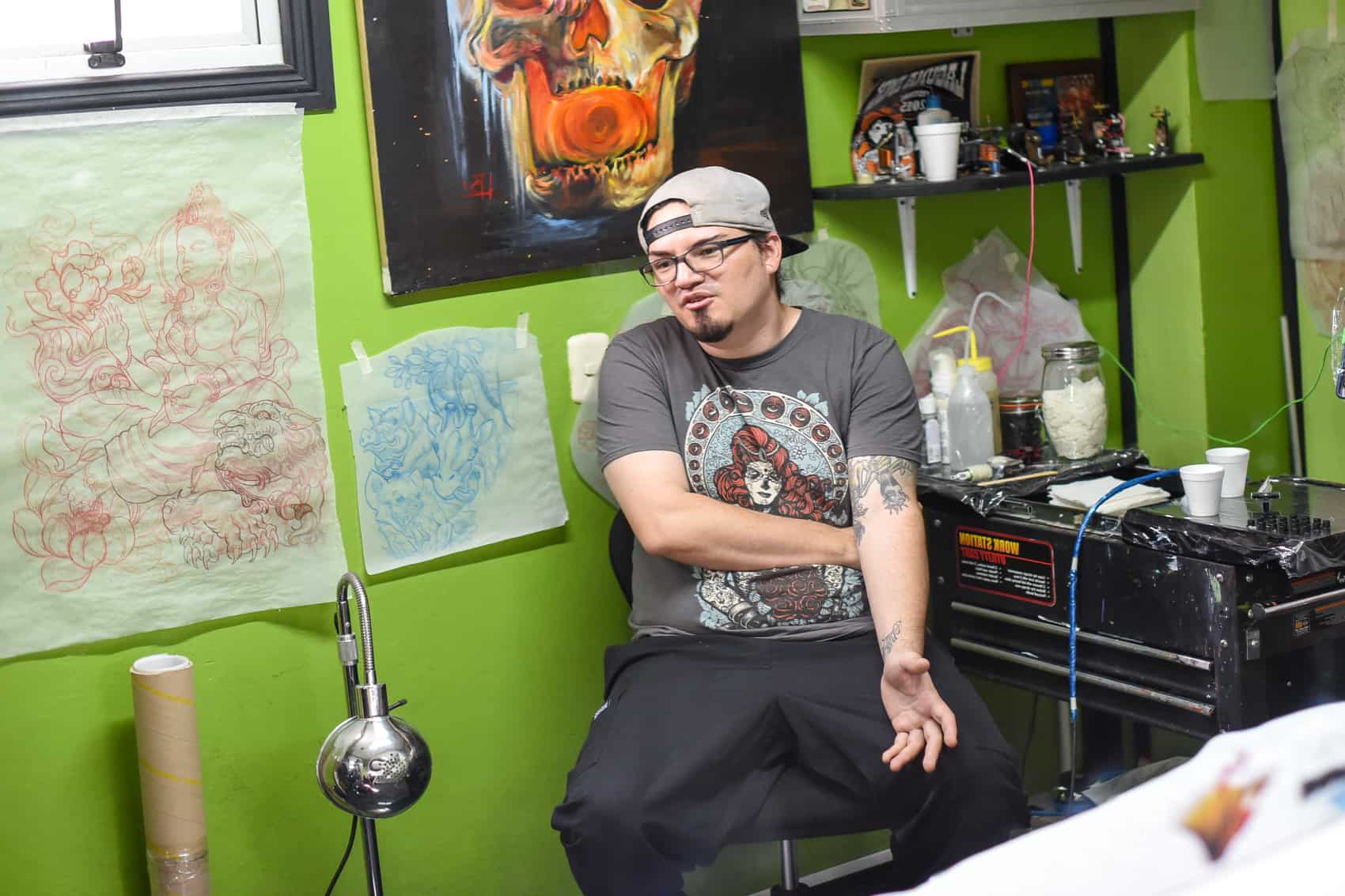 Luis Bonilla is a tattoo artist from Cartago, east of San José – but his fame extends far beyond his hometown. People from all over Costa Rica trek to his hidden Cartago studio just for the chance to be tattooed by him, and if you’d like to join them in 2016, think again: his agenda is already full for the entire year, so you will need to make a reservation for 2017. Bonilla, 35, runs Phantom Studio with three talented colleagues; when he’s not inking a new design, he also draws, paints and, of late, creates sculptures.

The Tico Times visited Phantom Studio to talk to Bonilla about his career. Excerpts follow.

How did you become a tattoo artist?

It was like a fluke of fate. I’ve always like to draw, and I have a great imagination, too. My friends here [in Cartago] saw that I drew, and one day this crazy guy just came and said: “Make me a tattoo!” I was like, “What? I’ve never done a tattoo before,” and the ones I’d seen were horrible. He told me he had tattooed before and could show me, and I agreed. I was about 16 and didn’t have anything to do; at that age, I was just waiting for someone to come along with a foolish idea.

The guy told he would come back the next day with everything necessary to make him the tattoo, so I was expecting him to bring an actual tattoo machine, but no! He brought needles and markers, so I had to take out the marker tip and put the needles on it and then start making the tattoo. I think it was only a circle. I don’t even remember if we actually finished it. But my friends started talking about it, and started asking me to made them tattoos, and as time went by I improved and [eventually] someone asked me how much I’d charge him for a tattoo. I charged ₡500 [about $1] for my first paid tattoo, and I felt amazing [laughs]. That guy became my first customer. He came every week to get a tattoo.

My family was kind of old-school, so they didn’t like the idea of me as a tattoo artist, because at that time tattoos were seen as something bad, related with drugs and criminals. I remember I used to hide my tattoo magazines as if they were porn magazines [laughs]. I was really afraid that my parents would found them, and one day they did, and it was a huge problem. My mom cried and asked me what they were, why I had them. My youth was kind of difficult; I had quit school and wasted my time. I liked to make tattoos, and I earned money with it, but I couldn’t live from it because I didn’t have the required knowledge. With the help of the woman who is now my wife, who has always supported me and believed in me, I started taking it seriously and working hard. She and some friends helped me buy the equipment I needed. 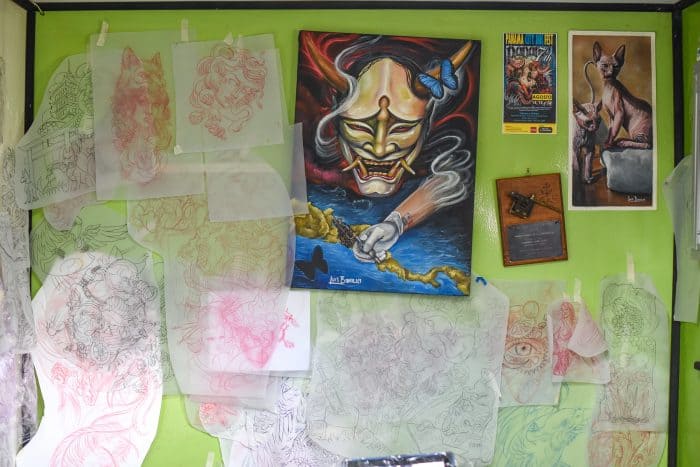 How did you train?

My training process was awful. I basically learned on my own, through trial and error. During that time, it was pretty hard for the new tattoo artists because existing tattoo artists didn’t want anyone else to take away their business. If you went to a studio to buy something, they kicked you out, saying “Get out, go pick coffee.” It was difficult, and I felt bad about it because they humiliated us. We also didn’t have YouTube or the internet, so you had to learn based on your friends’ trust [because friends had to allow you to tattoo them as practice]. They would say, “Just do it, and if it’s not good, you’ll fix it.” When I was able to buy a professional tattoo machine I thought all my problems were going to be solved, because I thought the magic was in the machine, but I ended up using my old homemade machine. I could not do it with the professional ones.

The process was really slow, but the important thing is your commitment and willingness to learn. Today it’s easier, because the equipment is way better, and there are tattoo studios needing talented people. The key is to know you never stop learning: I have been doing this for many years, and I’m thankful that lots of people trust me, but I still feel like an apprentice. The day I stop learning will be the day I die. 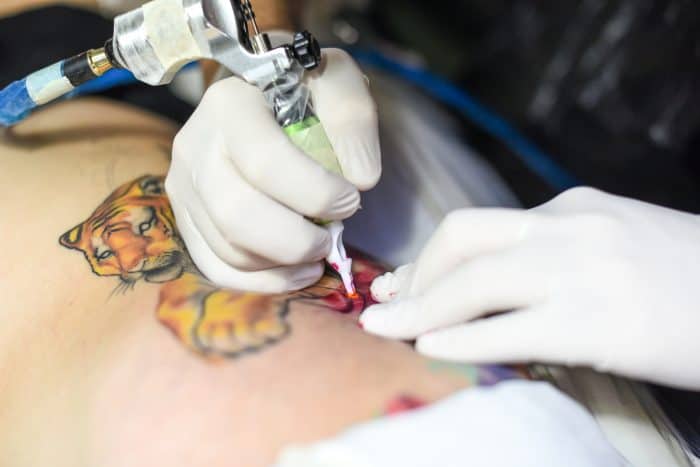 How do you work?

I worked for many years in commercial tattoo studios, where you tattoo people who are walking by and come up with the idea of getting a tattoo. They just choose a design on the wall, or whatever design they can afford. But, to me, the tattoo goes beyond that. It’s something more rooted in what you feel. So the work we do here is more personalized. It’s directed at what the customer wants specifically. I don’t copy designs; I don’t look for designs on the internet or in magazines. What I like to do is to listen to the customer’s ideas and what he or she wants to represent, and based on that I create a unique design to him or her. [If someone comes and ask me to repeat a design I already made] I wouldn’t do it. I won’t repeat a design. I can do another one on the same topic, but never the same twice.

Here, I have only a customer per day, and usually I spend approximately 7 or 8 hours on that person. Most of the tattoos are big, so they require more than one session. It is a more intimate process, more personal.

What’s the process for creating a tattoo?

The tattoo itself is the culmination of a long process. When the customer tells me what he or she wants, I do research before starting the design. I do ask them for references to understand what they want, but lately no one send me references. They just tell me what they want and say, “You design it. I trust you.”

When I’m drawing my designs I try not to look at other tattoo artists’ works, because I don’t want to be influenced by it. I try to look for real images rather than other tattoos. For example, if someone tells me he or she wants a tattoo of a boxing kangaroo doing parachuting, instead of looking for people who have already tattooed that, I’d rather look for real images of a kangaroo, the parachute, then of boxing gloves. I like making graphic tattoos, without many little details, because as the skin ages, those details will be lost. I want to sell a product that lasts over time. 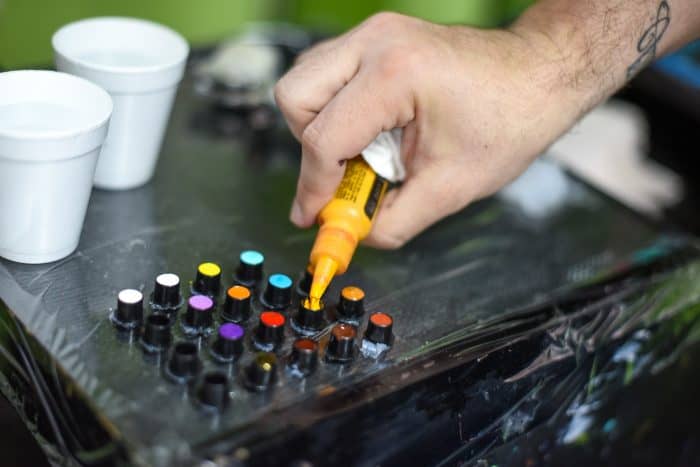 I usually make full-color tattoos, and I like tattoos with movement and dynamism, tattoos that transmit a message. I like New School: it is based on grafitti, with intense colors and twisted images. I took the foundations of New School and mixed them with what I do, which is influenced by comics. I used to draw comics, and I really admire comic artists. They are my favorite artists.

To me, [designing the tattoo] is the best part. I enjoy it more than making replicas. I don’t underestimate the talent of those who do reproductions, because for that you have an incredible clinical eye, but what I really like is to sit down and draw a design. I have a lot of friends who practice many different techniques, so I can watch them and learn, and even if I don’t use exactly that technique, they are useful to make my work better. Any kind of tattoo is nice.

Find more info about Luis Bonilla, his co-workers, and their work at the Phantom Tattoo Facebook page. The studio is also collecting Christmas gifts for children in need; consult the Facebook page to donate to that effort as well.

Our “Weekend Arts Spotlight” presents Sunday interviews with artists who are from, working in, or inspired by Costa Rica, ranging from writers and actors to dancers and musicians. Do you know of an artist we should consider, whether a long-time favorite or an up-and-comer? Email us at [email protected].

President Joe Biden's administration on Tuesday broadened the range of legal guardians who can apply to care for migrant children,…