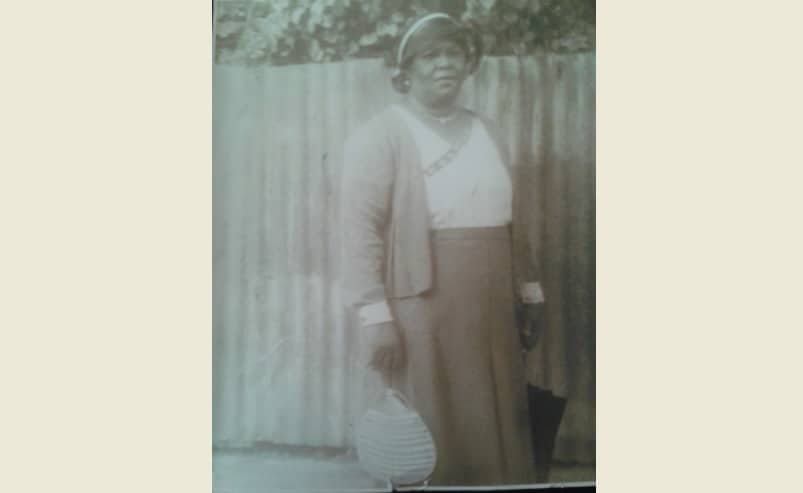 The author's great-grandmother, Ruth Gourzong, in Limón, circa 1940. ((Courtesy of Natasha Gordon-Chipembere))

On two separate occasions over the last year, I have been asked for information about what life may have been like in Puerto Limón during the 1930s and 1940s. Those asking me were exhausted by the stereotypical notions of Limón being about “Cocorí” and rice and beans. Though there is research on Marcus Garvey, the Universal Negro Improvement Association (UNIA), the Northern Railway and the United Fruit Company’s role in the banana industry, very little information has been preserved (or documented – beyond the work of don Quince Duncan) to highlight some of the individuals who forged lives in this region at the turn of the 20th century.

My personal interest is in slavery in Costa Rica, and it is always fascinating to be in conversations with Ticos who readily add the English-speaking Caribbean people who immigrated to Limón into the “slave pot.” I quickly respond that these immigrants were in fact never slaves, but rather educated people seeking economic opportunities for themselves and their families. They arrived in Costa Rica by choice, not force.

Many Costa Ricans – and this is not an indictment of people, but of educational systems – have no idea about the legacy of slavery that built the colonial capital of Cartago and fostered the tenuous cacao economy that helped establish the nation. Costa Rica has had several distinct immigration patterns by people of African descent, starting in the early 16th century. However, the general explanation concerning Afro-descendant people in Costa Rica usually falls into one of two categories: the “slavery never existed in Costa Rica/we are all Ticos” discourse, or the “all people of African descent were slaves and they live in Limón” discussion.

Normally, my response is a story that I tell to make human and individualize Afro-descendant people who have contributed to the well-being of Costa Rica.

My great-grandparents, Ruth and William Gourzong, came to Costa Rica to work for the Northern Railway Company at the turn of the 20th century. Ruth, a black woman, was born in Jamaica. William, a black man, came from New Orleans. He was hired by Northern Railyway in the United States to come down and run the “Northern Quarters” dormitory; he went to Jamaica on the way to Limón, where he met and married Ruth.  Together, they had seven children: Charlie, Winifred, Beatrice, Leonora (my grandma), William, Olivia and Victor – all born in Limón.

My great-grandparents were the sole proprietors of the Northern Quarters. The Quarters was a dormitory for the higher-level railway laborers who remained in Limón overnight on their way back to San José.  Each room had a twin-sized bed and was cleaned exclusively by a Caribbean woman named Ms. Dora. Meals were provided three times a day. There were communal bathrooms and showers. Each of the men paid for his stay with a signed voucher, and the amount was deducted from his salary at the end of the week. My great-aunt Beatrice managed the kitchens, with Mrs. Moltan as the cook, through the ‘50s and early ‘60s until the Quarters closed its doors in 1963.

Though the Quarters were racially segregated and served only Hispanic Costa Ricans and foreigners who worked for the company, after my great-grandfather William’s death in 1937, Ruth ran the hotel for more than 20 years as a widow who spoke only English.  Through her job as the hotel manager, Ruth was able to build a house on the outskirts of Jamaica-town (now Barrio Roosevelt).  Because of her veritable wealth, Ruth financially assisted her children and played a central financial role in the upkeep of the Baptist Church, where she was a Deacon and head of the Women’s Group. She owned several properties that she allowed her children and their families to live in, and had wonderful house parties with a piano and gramophone. Hers was one of the first houses in Limón to have indoor plumbing, with a huge bathtub and toilet. Not trusting the state of the banks in Limón, which had already been bankrupt a number of times during the 1930s, Ruth kept vast quantities of money (dollars and colones) hidden throughout her house.  In old age, she hired a Black lawyer from Limón to write her will in which she allotted properties, goods and money to her family.

It is not often that narratives about successful West Indian women in Limón are documented, and yet, according to my tías, there were many other successful Black women and men who served as role models and formed a tight network in order to advance their Costa Rican-born children into society.

The point I am trying to make is that these were everyday people who lived, loved, worked, and had the same dreams as others: to see their children prosper in a country which only allowed them to become “naturalized” starting in 1948. Life was not easy in Jamaica-town of the 1930s. However, Ruth understood that in order to survive, she had to save and plan for her family. Being politically astute, she encouraged her grandchildren to get as much education as possible in order to be part of the changing national tide so that they too could reap the benefits of their full civic rights.

In many ways, the patterns of my family reaffirm the general cultural patterns of West Indian immigrants who migrated to Limón at the turn of the 20th century.  They had little association with Hispanic Costa Ricans, they were politically-minded and by 1920, Marcus Garvey’s Universal Negro Improvement Association (UNIA) had established 23 branches along the Atlantic Coast. Ruth’s multiple positions as mother, widow, laborer, Church elder, grandmother, property owner and shrewd businesswoman is a reaffirmation of the complex challenges and successes of Afro-Costa Ricans as they engaged the world. Ruth’s sacrifices created a Costa Rican family which today boasts of numerous doctors, lawyers, teachers, civil engineers, architects, dentists, linguists and social workers.

Ruth’s story is an example of the legacy of African-descended populations in Costa Rica. I believe that the nation will be richer as each life story is layered into its history.

Natasha Gordon-Chipembere, a writer, professor and founder of the Tengo Sed Writers Retreats, moved to Heredia, Costa Rica with her family from New York in June 2014. She may be reached at indisunflower@gmail.com. “Musings from an Afro-Costa Rican” will be published twice-monthly.