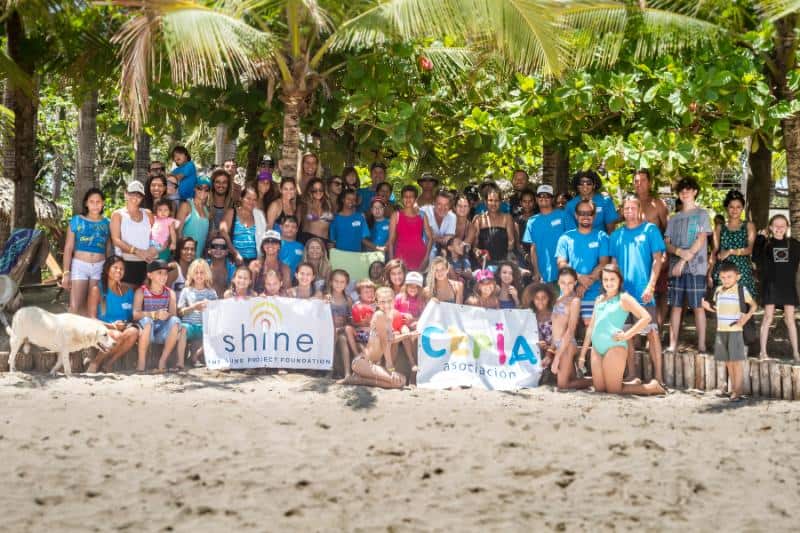 Volunteers, organizers, participants, special needs kids and their families gathered at Avellanas beach, in the province of Guanacaste, on Saturday to enjoy a day of surf and sun. ((Courtesy of Jorgelina Agramunt / Avellanas Surf Photos))

At first glance, it looked like an ordinary day at Avellanas beach, on Costa Rica’s Pacific coast. Kids on surfboards were pushed into the waves while others played in the sand. Food, drinks, and families having fun were everywere. On closer inspection, you might have noticed something outstanding. A group of special needs children with cerebral palsy, Down syndrome and developmental delays such as autism were here to enjoy, some for the first time, a day at the beach.

Under the auspices of the Shine Project Foundation, this activity was organized by Carlsbad, California couple Rob Williams, a dual language immersion teacher and his wife Cheryl, who teaches moderate to severely disabled students.

The Shine Project Foundation was created in October 2013 in the United States “to provide events and opportunities with typical peers to help facilitate communication, build friendships, and develop creative, recreational, and vocational skills in a safe, fun, and structured environment.”

Saturday’s beach day was the first activity the couple has organized in Costa Rica, where they have been on leave from their jobs for the last year.

After the Williams conceived the idea of a beach day for special needs children, they reached out to Courtney Gaw Borquet, a board member of the nonprofit association for Culture, Education and Psychology for Infants and Adolescents (CEPIA), who located the appropriate families.

“I found the kids at physical therapy sessions at CEPIA,” Gaw said. “Then I went into different towns and asked around, called the leaders of the communities to find the kids for today.”

She invited eleven families from six towns in the province of Guanacaste and they were certainly ready for fun when the bus arrived to drive them to Avellanas beach.

Once on the sand, approximately 30 volunteers were on hand to facilitate all of the scheduled activities including surf lessons, areas for swimming and playing in the sand, even a spot where children could be dragged along the shore on a boogie board.

“We love special needs kids and we wanted to do what was necessary to give them the opportunity to enjoy the beach, and some of these kids have never been to the beach,” said Rob Williams.

One of those children was 13-year-old José Francisco Baranco, who was not only on his first trip to the beach, but got his first taste of the ocean too. Two volunteers carried him into the water, where he played  for 10 minutes and didn’t want to come out.  With flapping hands and a warm smile he let them know that he wanted to stay put.

Victor Nuñez Ramirez, Tamarindo’s head lifeguard, watched over everyone with eagle eyes because the surf had a strong current.  He observed as 14-year-old Ignacio Orbando López was lifted from his wheel chair, loaded onto a longboard surfboard, and then pushed into the waves by two surf instructors.

Even though Orbando has cerebral palsy, he wore a big smile as he took a surf lesson from Mauricio Ortega Chaves of Avellanas Surf School. With Ortega holding him at the waist, and another instructor applying pressure to the nose of the board, Orbando had enough balance to ride a wave into shore.

“To me, being with these kids and teaching them how to surf, is just plain surfing, period. They’re just like you and me,” said Ortega.

After his surf session, 5-year-old Angelo Borquet shot the world famous surf symbol, the shaka (thumb and pinky up), as he climbed off his board. He then joined another boy who, like him, has Down syndrome. Together they worked at digging holes and building sand castles with similarly aged children from Avellanas and the surrounding areas.

“It’s important for these kids to be included in all activities, and to be able to enjoy a day just like their peers do at the beach,” said Gaw, who is Borquet’s mother.

Cheryl Williams felt the day was a success. “Although they do not have the mental and cognitive ability to express themselves verbally, they can express themselves with body language,  facial expressions and sounds. Being in the water and the sensation of the sand is very therapeutic, especially if they don’t move their body very much. It’s very exhilarating to them,”  she said.