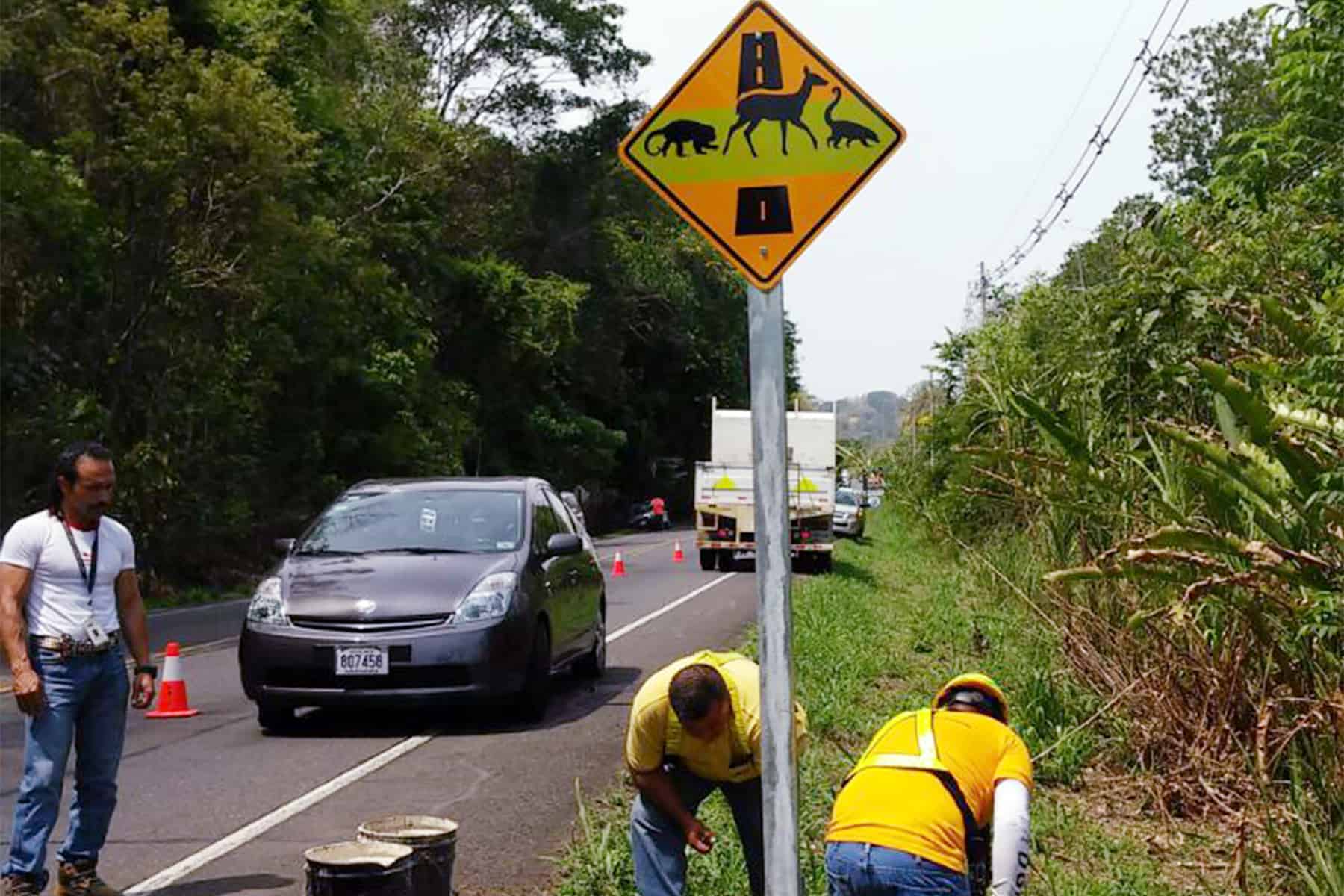 Officials of the Public Works and Transport Ministry this week started placing the new signs along routes where recent investigations have found the most road kills occur, April 22, 2015. ((Courtesy of MINAE))

Critters crossing Costa Rica’s roads may have a bit more of a chance against cars thanks to new warning signs the government unveiled this week.

Asking motorists to slow down for animals on the road is the main objective of the new wildlife crossing signs presented Wednesday as part of the celebrations for Earth Day. The official presentation took place in a ceremony at Carara National Park in the central Pacific, attended by officials from the National System of Conservation Areas and the Costa Rican Tourism Board.

The new signs are yellow and diamond-shaped with the black silhouettes of a monkey, deer and coati crossing a street. They have no text.

“We respectfully ask all motorists to slow down when they see these signs, and we even invite them to stop their vehicles and take the opportunity to observe part of the natural beauty of our country,” Environment Vice Minister Patricia Madrigal Montero said.

Research by the University of Costa Rica’s (UCR) Ecotourism School found that speeding drivers are the main cause of wildlife death on roads in Costa Rica’s Pacific region.

For a full year a group of UCR investigators traveled 650 kilometers, working from 5 a.m. to 7 p.m. to count the number of wild animals killed on the roads. They found the animals most affected by speeding motorists were anteaters, raccoons, ocelots, mice, foxes and vultures.

A MOPT report last year noted that the southern Pacific region — the area with the most deaths — had 33 installed wildlife crossings, including four hanging ropes for monkeys, squirrels and other arboreal species, and 29 tunnels. Yet animals are still killed in the area by speeding drivers.

The wildlife crossing signs were officially approved last year but officials from the Public Works and Transport Ministry (MOPT) started placing the first ones this week with the help of the Environment Ministry.

MOPT officials will be placing signs in strategic locations over the next month.