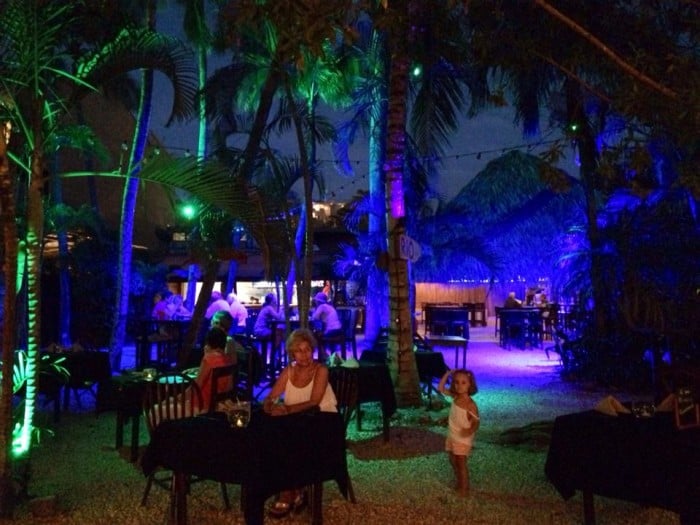 If not for Jimmy Buffett, there would be no Latitude Blue Restaurant in Tamarindo. That’s because after seeing over 100 of the rocker’s concerts, Michael Holly decided he wanted to create a place with the tropical feel inherent in Buffett’s songs.  Oddly enough, he also used his experience from the 10 years managing a Wendy’s in Toledo, Ohio, and mixed that with the seaside lifestyle he came to love in Jimmy Buffett’s songs to refurbish and refresh the old Nibbana into his dream restaurant.

The vision started in 2008 when Holly first vacationed in Tamarindo, during which time he and his wife dined at Nibbana. “The second I came in the door, it was exactly the location I had in my mind for years—a rancho with a location on the beach,” he recalled.

Four years later, when Holly came back to town, Nibbana was for sale, and he bought it.

Now, Latitude Blue has achieved the perfect combination of tropical ambiance and gourmet food. From the refurbished entrance, complete with repaved sidewalk and two new high-tech video screens, to the multi-screen sports bar area upfront next to the bar, rethatched rancho, to the tables set on the sand next to the ocean, and the stage, Latitude Blue is sultry breezes, blue light and Blue Margaritas and Blue Sangria—Jimmy Buffett personified.

(Of course, if beach music is not your thing, the restaurant features My Jam, which allows guests to sign onto myjam.me/Latitude Blue via smartphone; here you may choose any song to be played on the restaurant television screen.)

Before the grand opening, Holly hosted a gathering of Tamarindo locals who were treated to samples of the new tapas menu, signature blue drinks, and full soup-salad-dinner menu called Celestial Latitudes.  Samples of flavorful mahi mahi tacos, fresh-from-the –shell coconut shrimp, creamy onion soup, delicious ceviche, deep fried avocados—who knew?–and other delicacies were introduced. The star of the tasting was the tuna tartar, fresh fish with avocado mango, ginger, soy sauce and sesame seeds—a  perfect blend of sweet and savory. This dish was so good it was the appetizer choice when we dined at Latitude Blue a couple of weeks later.

That’s when Chef Luis Bustos, introduced himself.  His kitchen pedigree includes Villas Sol, Westin Conchal, JW Marriott,  Four Seasons, and other spots, and he and Holly come up with the in-depth collaborative recipes.

The duo kept the popular dishes from Nibbana, such as Pasta Tamarindo, a linguini with lobster and shrimp drenched in a creamy Chardonnay sauce, and the Shrimp Nibbana, shrimp in tomato sauce and capers on wontons with yucca croquet. After eating them we can understand why they remain on the menu.

“Next, the basics I had ideas from traveling around the world,“ Holly added.

“My boss has the ideas, then I take my knowledge and make a masterpiece,” explained Bustos.

Our meal included one of these new dishes: chicken curry—tender white meat chicken in curry sauce with coconut rice and an amazing grilled pineapple.

Of course, Holly wanted his restaurant to have a signature side dish, and he found his inspiration from a mofongo in Puerto Rico. It was this sampling of mashed plantains with shrimp, chicken and spices, that led Holly and Bustos to their own version. Now, Latitude Blue’s distinctive side accompanying meals From the Grill and From the Sea dinners is an addictive mashed plantain, bacon, garlic, cumin concoction.

With a variety of entertainment scheduled to appear on the stage, including a comedy show jus the week after we were there, and on the sand, a fire show every night at 7:30 p.m., as well as every televised sporting event possible, Latitude Blue also provides the right mood for its food. Holly has indeed created a place where, as Jimmy Buffett would say, there are “Changes in Latitude, Changes in Attitude.”

“I want this to be the place when clients walk in and eat here, they then say that Latitude Blue is the place you have to go in Costa Rica,” Holly concluded.