“From here to where the mountains start, everything you see that’s green is pineapple,” Xinia Briceño said, signaling the crops alongside Route 32, which runs from Costa Rica’s capital San José to the Caribbean port of Limón.

Just past the town of Pocora, there’s a wide entrance flanked by extensive pineapple plantations that leads to Milano, a town of some 700 people.

After crossing the train tracks, you start to see small plots of land with homes and a few cattle, dogs and hens. Briceño lives with her husband and daughter on one of those little plots of land, surrounded by fruit trees.

Nearly 12 years after Milano’s water was found to be tainted with the herbicide bromacil — used on nearby pineapple plantations — its inhabitants continue to use the contaminated water for bathing and household chores. Many locals believe the water has caused health problems.

The government of Costa Rica has dealt with the problem by trucking in drinking water to Milano and other affected communities in the canton of Siquirres — more than 6,000 people, according to University of Costa Rica law professor Nicolás Boeglin.

The estimated monthly cost, according to Boeglin, is $27,000.

This Friday, March 20, the Inter-American Commission on Human Rights, a division of the Organization of American States, will hold a hearing on the case of contaminated water in Siquirres.

Residents of Siquirres and their supporters allege that the government of Costa Rica is violating the communities’ right to access clean water by not properly handling the contamination problem, and not forcing pineapple growers to accept their share of responsibility.

Everyone bathes in that water

The U.S. Environmental Protection Agency considers it safe to drink water containing up to 0.70 micrograms per Liter (ugL) of bromacil. The most recent water analysis from five springs and Milano’s water tank, which is fed by the town’s aqueduct, detected up to 3.47 ugL of bromacil — nearly five times the EPA guidance.

The water tests were carried out last September by the University of Costa Rica’s Center for Investigation in Environmental Contamination at the request of the Center for Environmental and Natural Resource Rights. 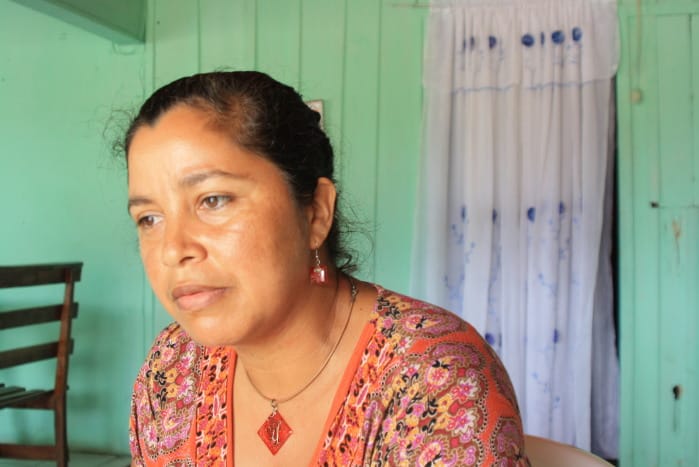 Briceño, who is president of Milano’s Aqueduct Administrative Association, said everyone in town uses that water to bathe. The water that the government trucks in every two or three days is only enough for cooking and drinking, she said.

“But we have nothing that proves definitively that [those problems] are caused by the water,” she said. “Those of us who have been able to see a doctor have realized that when we say the water is contaminated in our community [the doctor] says it could be the cause. But no one will give us a medical diagnosis that confirms it,” she said.

The first warning about possible contamination of Milano’s water came from an engineer in 1996, according to Soledad Castro, environmental consultant with the Center for Environmental and Natural Resource Rights.

In 2003, the National University’s Regional Institute for Studies in Toxic Substances tested the water and found contamination from three agrochemicals: diuron, bromacil and triadimefon.

The aqueduct that supplies Milano connects with the Milano aquifer and five springs in the Finca Babilonia sector, where the company Frutex once grew pineapples. Later, the multinational fruit company Del Monte bought the plantation.

Scientists believe pesticides used on the plantation seeped directly into the water table, affecting nearby springs.

In 2004, hydrogeological studies done by Costa Rica’s National Water and Sewer Institute showed that the town’s water could be contaminated. Nevertheless, authorities didn’t take any action at the time.

In 2007 the problem was made public. Then-Health Minister María Luisa Ávila said the water was not safe to drink and ordered Water and Sewer to deliver potable water by truck to the town’s residents.

The government also ordered Del Monte to reforest the area in order to protect the springs. The company planted eucalyptus instead of native species.

The water contamination in Siquirres is far from the only conflict registered between pineapple growers and local communities in Costa Rica. Over the years, pineapple companies have been accused of contaminating ground and surface water sources, invading water recharge areas, destroying protected areas around springs and gullies, and violating labor rights.

“To date, the government hasn’t taken any legal action against those responsible for contaminating the aquifers,” he said.

For their part, pineapple growers say because they produce mostly for export, they must comply with strict guidelines on pesticide use from the European Union and United States.

According to the Environment Ministry, Del Monte hasn’t violated any rules regulating agricultural runoff because it doesn’t have any permits for runoff. The company reuses treated water from its plantations.

Soledad Castro, from the Center for Environmental and Natural Resource Rights, said it’s been difficult to get companies to pay for the contamination. A court would need to find them responsible, and, perhaps more importantly, the sentence would need to be executed.

On May 29, 2009, the Constitutional Chamber of the Supreme Court ordered the Environment Ministry, Health Ministry and Water and Sewer to develop an action plan to address water contamination in the area. The court also ruled that the Health Ministry had the right to prohibit pineapple growers in the area from using toxic chemicals on their plantations, and could even order the plantations immediately closed if they didn’t comply with government orders.

Nevertheless, the Health Ministry has never acted on this.

According to the Water and Sewer authority, two hydrogeological studies have concluded that bromacil isn’t the only problem in Siquirres. Rather, because of local soil characteristics, any type of agrochemical could show up in the water, it said.

The water authority noted that plans are moving along for an aquifer that would carry water from Heredia province to El Cairo, one of the affected communities. But that aquifer wouldn’t provide water for Milano.

Tired of waiting, the residents of Milano began negotiating with the government and a nearby landowner to establish a new water source for the community. But the landowner, whose terrain houses the only viable spring for supplying the town, refused to sell the land for the price it was valued at.

To date, the community and private donors have contributed nearly ₡16 million ($30,000) toward the plan, including the purchase of land for a storage tank and payment for right of way.

Ironically, the project is being paid, in part, by raising the cost to households of water delivery from Milano’s contaminated aqueduct.

“The community has always said that they’re not responsible and shouldn’t have to pay for contaminated water. But if we don’t do anything, being in the situation that we’re in, where the companies who should be held responsible aren’t being held responsible, we have to do something,” Briceño said. “If not, nothing’s going to change.”

Faced with inaction in Costa Rica, the Center for Environmental and Natural Resource Rights brought the case to the International Human Rights Clinic at the University of California, Santa Clara, in the United States. Together, the organizations persuaded the Inter-American Commission on Human Rights, a division of the Organization of American States, to hear the case on March 20.

At the public forum, which is not an official legal proceeding, residents of Siquirres and representatives from the Milano aqueduct association will present their complaints and the Costa Rican government will explain what it’s doing to guarantee delivery of potable water to the area.

Briceño will testify at the forum. “The idea is to set a precedent to stop this from happening elsewhere,” she said.

She said the government and the pineapple growers should take responsibility for the contamination.

“They know they’re killing the community day by day with the agrochemicals that arrive at our homes. What’s going to happen to this community in the future?” she asked.

The 1-hour hearing at the Inter-American Commission on Human Rights will be broadcast live on the organization’s website at 2:30 p.m., Costa Rica time.