Why Costa Ricans want Mexico to lose in the World Cup 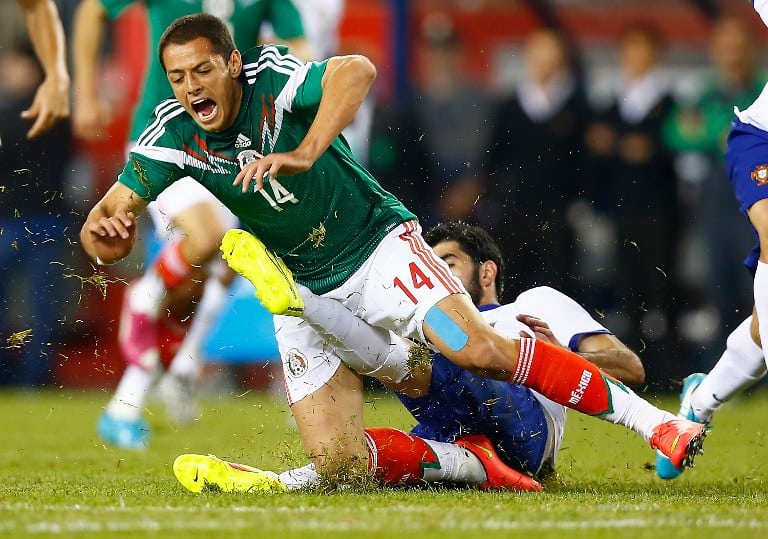 Javier Hernández, #14 of Mexico, is fouled by Neto, #14 of Portugal, during a friendly last Friday. A plurality of Costa Ricans hope Mexico gets kicked right out of the World Cup. (AFP)

After Costa Rica’s latest injury put a further damper on La Sele’s World Cup hopes, a Tico co-worker texted me a succinct analysis of his thoughts.

“Now the only joy I could get from the World Cup would be if Mexico gets pounded,” he wrote.

This is not an unpopular sentiment in Costa Rica. Mexico plays its first World Cup match today at 10 a.m. versus Cameroon. And you can bet Ticos will be rooting against Mexico. A new poll by YouGov and The New York Times’ Upshot confirmed this ostensible feeling as fact. (See the survey and all its results here.)

The survey asked fans in 19 countries participating in the World Cup who they were cheering against in the tournament. Thirty-seven percent of Ticos chose Mexico. No other country picked Mexico as their top or second choice. No other country showed such animus toward another country except for South Korea and Japan. And here the disrespect was mutual with 38 percent of South Koreans picking Japan and 40 percent of Japanese choosing South Korea. Mexico’s top answer was the USA, though only with a plurality of 16 percent.

Why all the hate for Mexico in Costa Rica? Mexico has a long history of dominating soccer in North and Central America (a region known as CONCACAF). The country has prevented Costa Rica from reaching the World Cup on a few occasions. Moreover, rivals within the region feel Mexico doesn’t often carry itself with the humblest of attitudes.

My co-worker explained it’s not necessarily personal: You see the Mexico Football Federation is like the New York Yankees or Dallas Cowboys or Duke Blue Devils of CONCACAF. Even if your own team isn’t playing well, there’s a certain schadenfreude that comes from seeing Mexico’s “El Tri” fail.

Honduras wasn’t polled for this endeavor, though it’s a fair bet to assume the Hondurans feel the same way about Mexico. As for the last CONCACAF team in the World Cup, the United States — it seems they have much deeper issues to work out.

Who are U.S. citizens rooting against in the World Cup? Why themselves, of course.

Five percent of respondents in the United States said they were going against their homeland. The U.S.’ second most popular team to root against was Russia, which during these trying times also makes sense. Iran was third. Russia’s top choice was the U.S. (19 percent), and second for the Russians was themselves.

The three teams that countries loved to hate the most were the United States, Argentina and Iran. Australia and Italy also chose the U.S. as their preferred pick to crash out of the World Cup. Germany, Netherlands and Spain all selected Iran. (The Germans bizarrely selected Honduras as the second team they’ll be rooting against.)

As for Argentina, Brazil, Chile and Colombia all hated on their South American neighbors. The Argentines were Costa Rica’s second least favorite team, and the blizzard-loving U.S. team placed third. (The New York Times tries to explain why Argentina gets no love in a separate article; the most overt reasons are similar to why Costa Rica dislikes Mexico.)

The YouGove/Upshot poll also asked “Who will win the World Cup?” Almost every country, including Costa Rica, predicted Brazil to win. The exceptions were Spain, who picked themselves; Argentina, who picked themselves; and the United States; who, yes, picked themselves to win. Some 14 percent of U.S. citizens went with the their homeland. So while Gringos are pretty sure they hate themselves, they’re also fairly confident in winning the whole tournament for the first time ever. The U.S. coach disagrees with that prognostication.

What the poll results really demonstrated is that the U.S. still doesn’t care about the World Cup. Sixty percent of U.S. citizens described themselves as “uninterested” in the tournament, making them the least excited among those polls. Only 14 percent of Costa Ricans were “uninterested,” placing them as the sixth most enthusiastic team.

Unfortunately for Costa Rica, that enthusiasm could be short-lived while Mexico will probably be able to boast about its success among the region again. Another analysis by The New York Times shows that Mexico is the “world’s luckiest country” in the this year’s World Cup:

How did the United States get repaid for its generosity? By being placed in a far more difficult group than Mexico, because of the luck of the draw. Mexico now seems in a better position than the United States to advance to the Round of 16.

And while the United States’ luck of the draw was bad, Costa Rica’s kismet was even worse. Of the 32 teams in the World Cup, only five squads drew into an “unluckier” group than Costa Rica. The Ticos take on three former champions (Uruguay, Italy and England) in their draw. A bitter pill to swallow that gets a little less painful if Cameroon can just beat Mexico on Friday morning.