Japan town known for its dolphin slaughters sued by activists 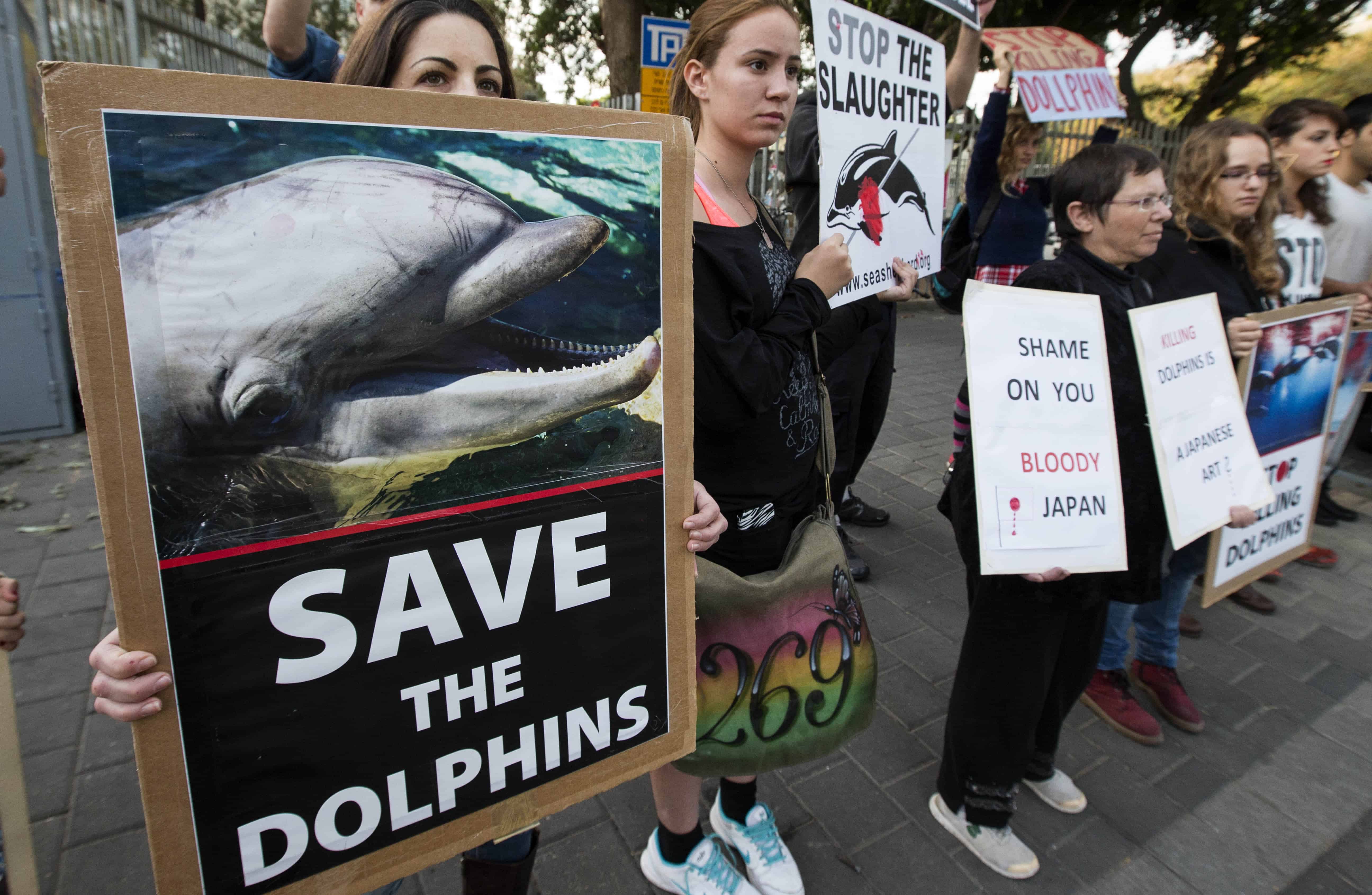 Israeli members of the "Taiji Dolphin Action Group" hold placards during a protest against the killing of dolphins in Taiji, on Jan. 30, 2014 outside the Japanese Embassy in Tel Aviv. (Jack Guez/AFP)

Sarah Lucas, head of “Australia for Dolphins,” filed a lawsuit on Tuesday at the regional court of Wakayama, western Japan, where the town of Taiji is located, demanding an end to “discrimination based on race” and about seven million yen ($69,000) in damages, she told a news conference.

The activist said she visited the museum in February to check on the condition of an extremely rare albino dolphin calf, named Angel by her group, which was caught in January and has been kept in a “cramped, abusive show tank.”

But a ticket officer turned her away by with a sign in English that read: “Please note that anti-whalers are not allowed to enter the museum.”

Lucas added she knew other foreigners who had been given the same treatment.

“The museum has not allowed law-abiding people, who wished to see Angel, to enter and turned some people away purely on their appearance,” she said, calling the act a violation of the Japanese constitution which bans discrimination based on race.

Ric O’Barry, an advocate for the protection of dolphins worldwide who appeared in the Academy-award winning documentary “The Cove,” which focused on the town’s dolphin slaughter, said the action “ramps up the pressure on the Taiji government to bring an end to these inhumane hunts once and for all.”

The 2009 movie graphically documented the dolphin culling in Taiji, arousing international condemnation, with a number of foreign activists including members of the international environmentalist group Sea Shepherd based there to protest the culling.

The town has depended on coastal whaling for four centuries, and local fishermen also corral hundreds of dolphins into a secluded bay to kill them for meat or sell them to aquariums and dolphinariums.

The annual dolphin catch sparked renewed global criticism after newly arrived U.S. Ambassador to Japan Caroline Kennedy tweeted her concern earlier in January at the “inhumaneness” of the hunt.

O’Barry, a U.S. man who found fame first in the 1960s for catching and training five dolphins for the well-known TV series “Flipper,” has latterly fought against keeping the mammals in captivity, and said: “Angel is living in hell.”

“This one small dolphin has become a global representative of the thousands of dolphins slaughtered and captured each year in Taiji,” he said.

Lucas said there are a number of people who have been refused entrance and can provide evidence to the lawsuit, but did not say exactly how many.

But the museum’s director, Katsuki Hayashi, told AFP by telephone: “We have no intentions to discriminate against anyone with the sign.”

“We aim to protect the town’s culture, assets and fishery,” he said. “We welcome [foreigners] who are clearly tourists.”

Defenders of the hunt say it is a tradition and point out that the animals it targets are not endangered, a position echoed by the Japanese government.

They say Western objections are hypocritical and ignore the vastly larger number of cows, pigs and sheep butchered to satisfy demand elsewhere.