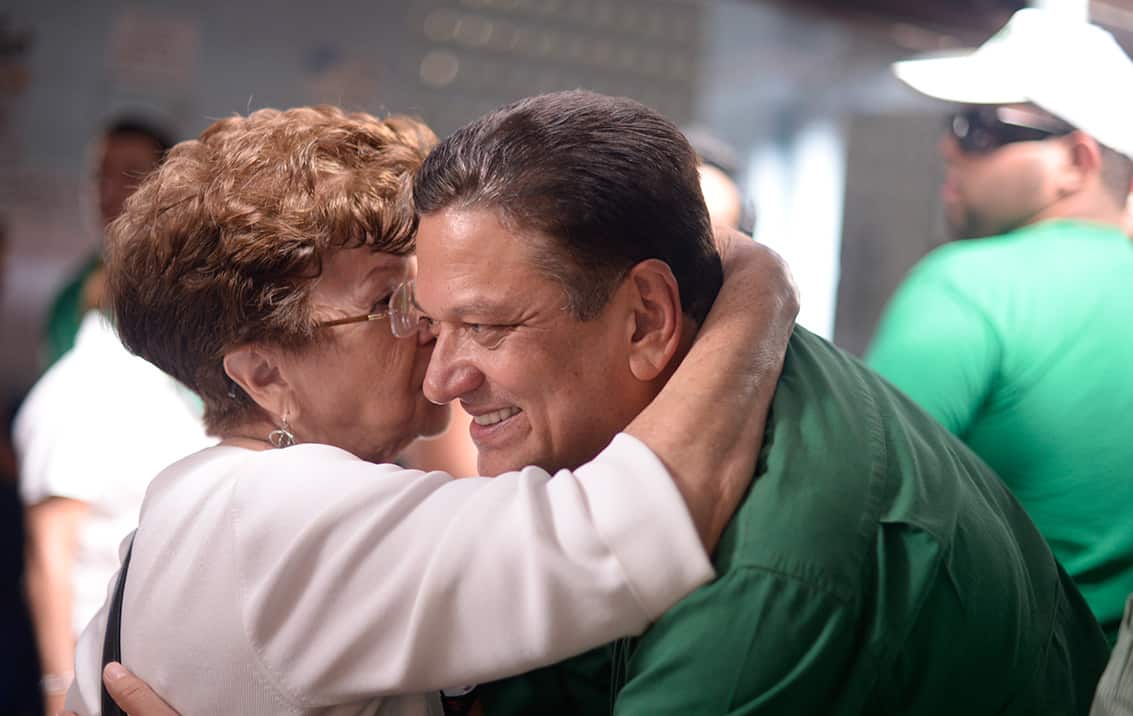 Surrounded by a throng of journalists, Araya said he has no regrets about his decision to stop campaigning in early March due to overwhelming odds against his victory and a shortage of campaign funds.  The former San José mayor said his decision would help improve unity within his struggling political party, which has dominated Costa Rican politics for half a century.

Araya then accompanied running mate Silvia Lara, who voted in the southwestern San José suburb of Escazú. Despite the odds stacked against him, Araya remained upbeat: “We’ve received several messages from across the country reporting that party members are present at all polling centers, despite our lack of financial resources. I want to thank all of them.”

He then took advantage of the media exposure to address his followers, saying, “I call on all Costa Ricans to cast their votes, and I particularly call on liberacionistas to collaborate by lending us cars to mobilize voters.”

Araya arrived a short while later at Carlos Sanabria elementary school in the western district of Pavas, where journalists continued asking him about his chances of winning.

“I hope that Costa Ricans pay attention to the call for national unity that I made, and I hope they understand that ours is the best proposal for Costa Rica. As of 6 p.m., I will be ready to serve the country, either as president or as a citizen,” Araya said shortly before casting his vote at polling center number 200.

“If the PLN becomes the opposition party, I will try to help however I can, and I will try to exercise responsible leadership in the party,” Araya added. “I will not act like other opposition parties that devote their time to blocking the current administration in an attempt to promote failure, starting on the first day of the term.”

Araya said he did not plan on attending other public activities the rest of the afternoon, and he said he would stay in contact with party members in all provinces via social media networks.

The candidate is scheduled to arrive at 6 p.m. at PLN headquarters, known as the “Balcón Verde,” near La Sabana Park in western San José. There he will wait for the first results issued by the Supreme Elections Tribunal, beginning at 8 p.m.

Araya, who governed Costa Rica’s capital for more than two decades before running for president, said he has no speech prepared for tonight, hoping his words – either in victory or defeat – “will come from the heart.”

Before leaving Carlos Sanabria school, Araya, whose brother Rolando unsuccessfully ran for president 12 years ago, insisted the PLN is not fledgling: “Our party has 63 years of history, and I personally will work for its renovation, as it is now clear that a generational renovation is needed.”