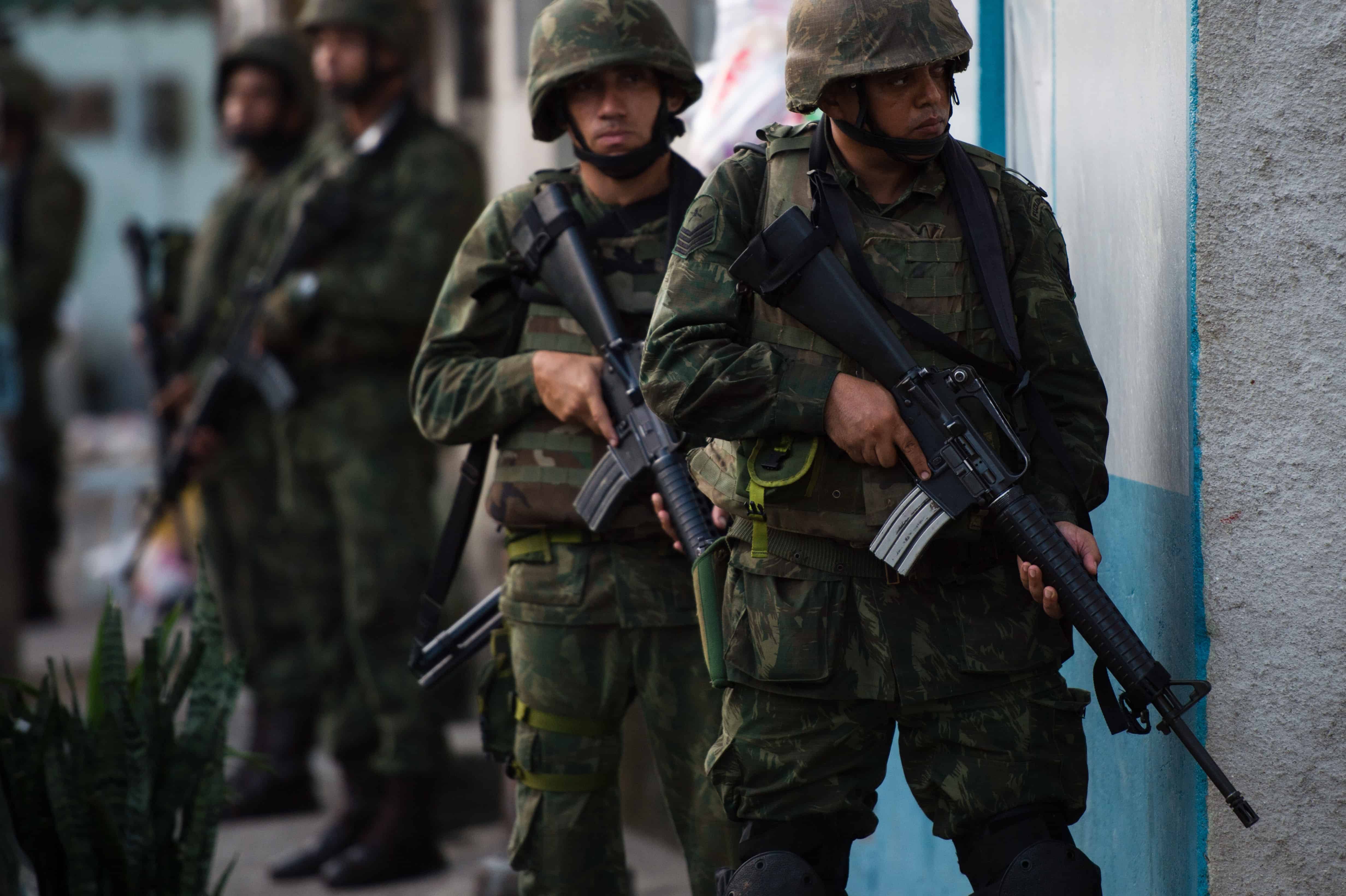 Brazilian soldiers patrol during security operations in Vila Pinheiro, part of the Mare shantytown complex near the Galeão International Airport, in a north suburb of Rio de Janeiro, on April 5, 2014. (Christophe Simon/AFP)

RIO DE JANEIRO, Brazil – Thousands of soldiers in armored vehicles, trucks and on foot fanned out across Rio de Janeiro’s most notorious slum on Saturday to shore up security before the World Cup.

The move is the latest attempt to drive drug gangs out of the notorious Mare shantytown, a haven for organized crime and one of the city’s most dangerous neighborhoods, located near Rio’s international airport.

The Mare complex, home to 130,000 people, is a potential through route for tens of thousands of football fans flying in and out of the metropolis, which will stage seven World Cup matches, including the July 13 final.

Members of the feared Special Police Operations Battalion, with guns at the ready and backed by helicopters and armored vehicles, had stormed into the Mare favela on March 30.

Some 2,700 soldiers, sailors and military police entered the slum at 6 a.m. on Saturday to take over the huge operation.

Officials said their goal was to provide long-term security ahead of the start of the football tournament. Brazil will face Croatia a little more than two months from now, in the World Cup curtain-raiser on June 12.

“We are ready to fulfill this mission,” Defense Minister Celso Amorim said as he visited the sprawling area. Brazilian soldiers patrol the street during security operations in Parque Uniao, part of the Mare shantytown, in a north suburb of Rio de Janeiro, Brazil, on April 5, 2014. Christophe Simon/AFP

Residents went about their business during the operation, occasionally poking their heads out of windows to watch the soldiers as they entered their vast favela.

Many resisted talking to reporters, fearful of reprisals from drug trafficking gangs.

One woman who declined to be identified told AFP: “I hope things will get better here.”

But another woman, who gave only her first name, Eulalia, was not optimistic.

“This is just for the World Cup. When that’s over, this, the presence of the Army, will end and we’ll return to business as usual,” the 73-year-old predicted glumly.

They are replacing some 1,500 police who had been in place since Sunday. During that time, they reported 36 confrontations with suspects, leading to 16 deaths, eight people injured and 118 arrests.

In the past week, police seized a trove of weapons, including 24 grenades, two machine guns, 100 pistols and rifles, and assorted bullets, as well as more than 1,000 tons of marijuana, cocaine and crack.

Despite aggressive efforts to clean up the favelas ahead of the football extravaganza, violent crime remains a problem in Rio.

The huge slum “pacification” program has been in place since 2008, and aims to improve security across the city, which will also host the 2016 Olympics.

“The armed forces are once again demonstrating their commitment to the nation … and safety of the inhabitants of this region,” President Dilma Rousseff posted on Twitter on Friday night.

Police Pacification Units (UPPs) have been installed in 174 Rio favelas, home to around 600,000 people.

In the six years since the pacification program began, murders in districts with a UPP presence have fallen 65 percent and 48 percent in Rio as a whole.

However, attacks on police have intensified in recent weeks, suggesting drug gangs are refusing to go quietly.

But Rio state’s interior minister, José Mariano Beltrame, has launched a counterattack and told AFP in February he “will not shrink” as he cranks up the pacification process.

“We were never under any illusions that the ringleaders who have dominated the favelas for more than 30 years would give up easily,” Beltrame said.