Tired of gangs and poverty, Salvadorans head to the polls Sunday to choose between the left and right 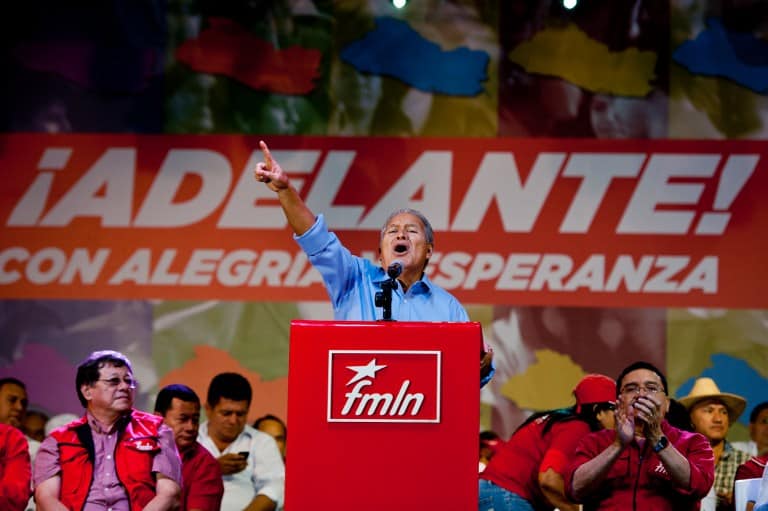 SAN SALVADOR, El Salvador – Overwhelmed by gang violence and economic inequality, Salvadorans will vote on Sunday in presidential elections marked by a heavy presence of security forces. Voters will decide if El Salvador stays with its current left-leaning government, or swings back to the right.

Leading the polls is the candidate for the ruling Farabundo Martí National Liberation Front, or FMLN, Vice President Salvador Sánchez Cerén. Closely behind is mayor Norman Quijano, of the right-leaning Nationalist Republican Alliance, or ARENA. Polls suggest a runoff election is likely.

Sánchez Cerén, a 69-year-old former guerrilla commander, has promised social programs in line with those that helped bring current President Mauricio Funes – the country’s first leftist president – to office five years ago. Quijano, 67, hopes to restore ARENA to power by promising to crack down on criminal gangs.

At the close of campaigning on Wednesday, the streets of San Salvador were blanketed with the red flags of the FMLN and the red, white and blue of ARENA.

“We’re hoping for peaceful elections so that the majority of citizens can go out and vote. The police will be out to protect them,” Funes told an Organization of American States elections observer team.

The president noted that campaigning has taken place without violence, and the “specter of fraud has been eliminated.” He also promised transparency by the Supreme Elections Tribunal. Members of the Supreme Elections Tribunal prepare electoral boxes to deliver throughout the country, in San Marcos, some 13 km fron San Salvador on Jan. 31, 2014. AFP/Inti Ocon

Speaking on a radio program on Saturday, Funes urged all Salvadorans to go out and vote.

“Today it’s easier to vote than before. The options are right in front of you. Vote for what is best for you, but make sure you vote,” the president said.

A total of 4.9 million voters will head to the polls Sunday, which open at 7 a.m. and close at 5 p.m. More than 10,000 elections workers will be stationed at 1,591 voting centers around the country. More than 10,000 Salvadorans living abroad are registered to vote in other countries.

According to TSE President Eugenio Chicas, initial results will be announced at 10 p.m.

Taking office in June, the next administration will have to work to resolve continuing crime problems and to deal with violent gangs, despite a gang truce that has helped reduce the homicide rate from 14 per day to 6.8.

However, extortion of small businesses – such as bus companies – and even of poor and middle-class residents, hasn’t ceased, causing many to question the seriousness of the gang truce, which took effect in March 2012.

On the heavily transited thoroughfare of Escalón and on other streets this morning residents awoke to signs with Sánchez Cerén’s face and a tattooed gang member along with the words “A vote for the FMLN is a vote for the gangs.”

ARENA has accused the FMLN of favoring gangs with the truce, while Funes insists the “iron fist” approach of previous right-wing governments from 1999 to 2009 had failed. Security expert Juan Ramón Medrano told AFP that the gang problem should be addressed with “consistent programs to reintegrate” gang members and their families into society.

According to authorities, some 10,000 gang members are currently locked up in prisons, and more than 50,000 roam the streets.

Both parties have denounced efforts by the gangs to coerce voters in marginalized neighborhoods, but the TSE denied serious threats to the electoral process.

The gangs have announced they will respect the electoral process, but just in case, thousands of military and civil police will be patrolling on Sunday.

In addition to public insecurity, the next administration will inherit a country with an economy that grew by a miniscule 1.9 percent in 2013, and where 40.7 percent of 6.2 million Salvadorans live in poverty. Official unemployment sits at about 30 percent.

“I hope the new president provides better security in the streets and generates more jobs,” Ricardo Cardoza, an unemployed 30-year-old who hopes to earn a degree in marketing, told AFP.

El Salvador, which suffered a 12-year civil war from 1980 to 1992, killing more than 75,000 people, has a dollarized economy and strongly relies on remittances from migrant Salvadorans living abroad. Those remittances totaled nearly $4 billion last year, nearly 16 percent of the country’s gross domestic product. Most of that money comes from the United States.