Pelicans to Porpoises in Costa Rica: Sea Animals Get Help

With enormous beaks and wingspreads, they beg our admiration as they glide across the water line searching the surf for fish. But it’s not always easy being a pelican. Those high dives can hurt, damaging beaks and breaking wings. Some nervy birds, looking for easy eats, land on fishing vessels and are mistreated by crews.

At Parque Marina, or Marine Park in the port city of Puntarenas, a small flock of injured pelicans can find respite. Though they are unable to fly, they know to find food around 3 p.m. near the fountain, just a short walk away from the courtyard and its large anchor, where they safely wander behind a chain-link fence. They get regular checkups from a veterinarian and, if rehabilitation is possible, they might someday return to the shore.

Parque Marina is a rescue center for sea animals. It is also an educational center, teaching about the environment and respect for the animals that live in it. With tanks and ponds for various species, the public can meet the creatures at close range and learn about life in and around the oceans.

Parque Marino is four blocks east of the main bus station in Puntarenas, or five blocks west of the Paseo de los Turistas. Find out more on www.parquemarino.org, which includes hours and a map of the park.

Prices are $10 for tourists and $5 for children. Nationals and residents, ₡2900, ₡1600 children. There are special rates for students, groups and those with disabilities.

There are crocodiles that look ferocious even when they sleep. Visitors step back when they yawn, displaying rows of teeth like saws. These were captured in the Tárcoles River near Puntarenas, where they threatened chicken and dog life along the waterways.

Eventually, they will be transferred to an area more suitable for them. Their smaller cousin, a caiman, lounges in a nearby pool. He’s not quite alligator, though the resemblance is there. Nearby a group of land turtles sleep in the shade of their enclosure or swim in their pond.

Ever get close to a shark? Four good-sized nurse sharks share an outdoor pool shallow enough to give visitors a good look at them as they swim by.

Inside the aquarium building, visitors get a look at Isla del Coco which, at 335 miles (532 kilometers) off the coast, is off most tour lists. But we learn about the island thanks to the French Fund for the World Environment, whose displays teach about its wildlife. Aquarium tanks give us an eye-to-eye look at sea life.

There are sea horses, bright colored coral fish eels and morays; sea anemones dance along rocks like little ballerinas. There are some bad guys, too. Lionfish, a striped, spiny and invasive species, play havoc with the local populations, as they have no natural predators. Who wants a mouthful of spines? Lionfish numbers are spreading and it will be a challenge to control them. 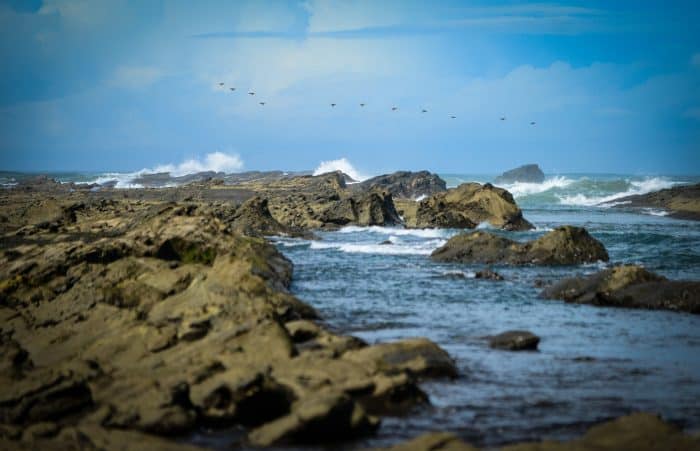 In an enormous, glass-fronted tank, guests can observe animals of the deep. One of these is Mario, a sea turtle picked up by a fisherman as a baby, and kept as a pet. When Mario outgrew his bathtub home, the owner brought him to Parque Marino.

With a dented shell and other injuries, Mario will not return to the sea. He’s also used to being around people, says biologist Natalia Corrales. He associates humans with food, and often comes over to study his visitors.

A “touching tank” allows people to get really close to sea animals. Urchins and star fish can be picked up, and they tickle as they crawl across a hand.

Outside in a shallow pond are several more sea turtles, one of which lost two of its flippers, possibly from fishing boats. He will live out his days in a pond.

Biologist Corrales knows the history of each of the inhabitants. People find injured animals along the beach and bring them in, she explains. That includes pelicans with broken wings and animals that are ill or have fungus conditions.

Firefighters bring in wild animals that have gotten into homes, boa constrictors among them. Some animals, like turtles, start out as pets and grow too big. “People think they make good pets until they grow,” Corrales said. Animals that can be returned to their own habitat go home again or are relocated, as in the case of the crocodiles.

The greatest dangers to the sea are human-related, Corrales explained. Turtles are victims of fishing long-line, nets and hooks. Turtles trapped in nets drown because they need to breathe air.

Contaminants infect small plants then enter the food chain, endangering sea life. Corrales said the future for the oceans is unclear, particularly because climate change is already affecting areas close to shores. As the water gets warmer, sea populations must move.

Parque Marino offers the public a close look at what’s in and under the sea, and also provides a facility for research and development. Fish larvae are extracted and raised to finger-size for fish farms. A quarantine area looks at the health of newcomers or those under the weather. The park works government’s animal health agency, SENASA, the Environment Ministry and INCOPESCA, which regulates fishing.