President is safe after confrontation with protesters 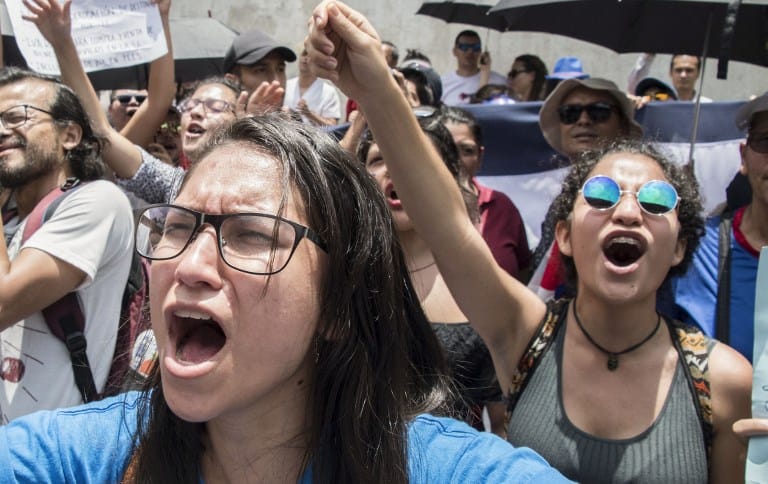 Workers of the public sector shout slogans as they march, during a strike called by labour unions to protest against a tax reform project, in San Jose on September 10, 2018. (AFP Photo / Ezequiel Becerra)

According to Enrique Arguedas, Deputy General Director of the Fuerza Pública, protesters surrounded the building in an attempt to stop the president from leaving. When Alvarado did exit the National Theater, protesters insulted the president and became physically aggressive against his police escort.

The President was unhurt, and Arguedas said no protesters were immediately detained.

“The President and the people there [in the National Theater] left securely,” Arguedas said in a video posted by the Ministry of Public Security.

In a video posted by the president early Wednesday afternoon, Alvarado emphasized the importance of peaceful democratic debate.

Watch the President’s statement in its entirety below:

The Tico Times spoke to Costa Rican journalist and economist David Ching earlier this week for a comprehensive explanation of the bill. Listen to the Tico Times Dispatch below, and subscribe to the podcast to have the latest episodes delivered to you:

On Wednesday, President Alvarado was participating in an inaugural event for the Congress of Urban Mobility at the National Theater. As protesters began surrounding the building, Arguedas said it became evident a larger police presence would be necessary.

Arguedas said that Wednesday morning’s events emphasized the police’s efforts to maintain peace while also allowing the public to exercise its right to protest.

“Unfortunately, some protesters are inciting the police and attempting to generate confrontation,” he said.