The election was over, and yet we marched 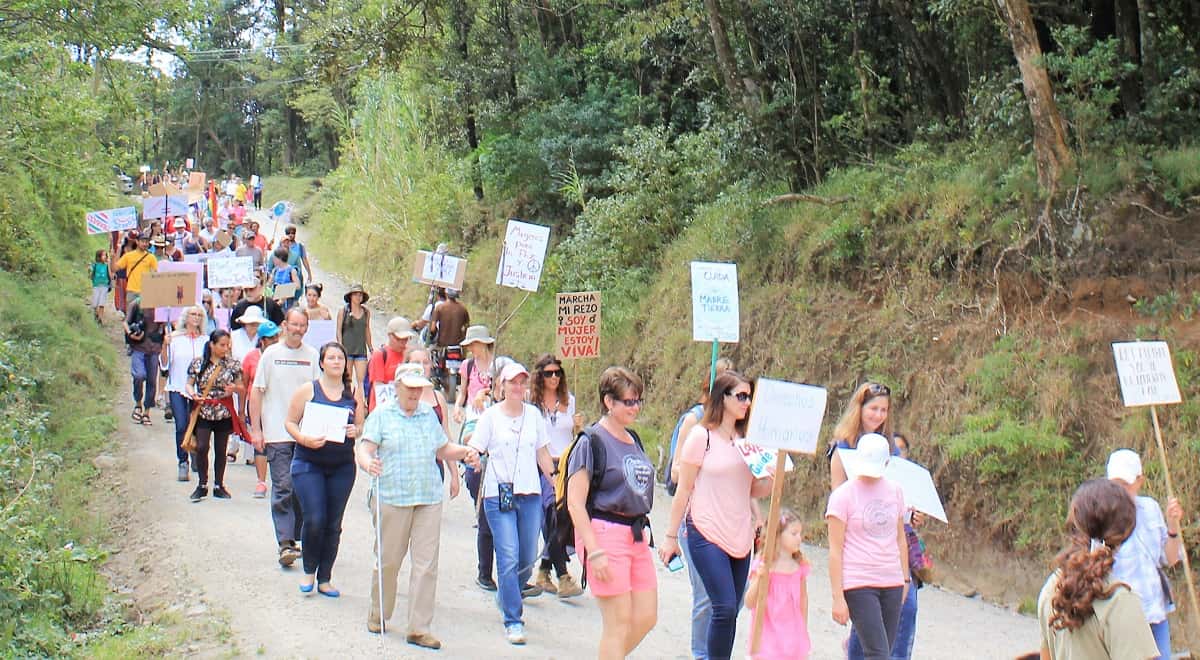 When my family moved from the United States to Monteverde, Costa Rica, for a year, my husband and I were seeking more time with our school-age children, less work, and a break from what sometimes felt like our over-commitment to community organizing and involvement back in our small town in Maine.

This spirit of emigration and new beginnings is in part what defines Monteverde. In the 1950s, a group of U.S. Quaker pacifists settled the region after some of their young men were imprisoned in Alabama for refusing to register for the draft. The judge who sentenced them said, “If you like this country, you should obey the laws of this country, and if you don’t like it, you ought to move out.”

And so they left. Some criticized these emigrants for giving up, for escapism, but Quakers have a long history of social action, ranging from antislavery to suffragist movements, and these settlers did not simply wash their hands of the United States. They joined with their Tico neighbors, as well as conservationists, artists, and anti-war activists, who followed them to this corner of the Cordillera de Tilarán. Together they founded a women’s arts cooperative, established the largest private reserve in Central America, worked for justice in prisons, founded schools and institutes for sustainability education and, more recently, set goals to make the Monteverde region carbon-neutral.

Two weeks ago, when Monteverde resident Katy VanDusen invited others to join her in a sister march to the Women’s March on Washington, as usual, my neighbors stepped up. One woman organized a sign-making party; another distributed song lyrics for the march; a man printed out forms to register folks on the day of the gathering; and 250 people emerged from their remote cloud forest homes with signs advocating for justice, not a single one mentioning U.S. President Donald Trump.

As I looked around the assembled crowd, I realized I was not gazing at a bunch of liberals out to assuage their frustrations with the current political climate. I was not witnessing progressive posturing. Instead, this was Monteverde flexing its collective moral muscles, demonstrating the values that many here live day in and day out.

Some have questioned why non-U.S. citizens, or citizens living abroad, bothered to march on Saturday. Why should we care about U.S. politics?  I’m certainly a believer in the interconnectedness of humanity. John Donne’s words come to mind in moments like these: “No man is an island, entire of itself; every man is a piece of the continent, a part of the main.” But at a purely selfish level, living abroad highlights for me more than ever the repercussions of U.S. policy around the world, and why we all have a stake in what happens in the White House.

Take climate change, for example. Here on the continental divide, rare animals migrate up the mountain, adapting to rising temperatures, while some at the top, like the famed golden toad, have disappeared. Climate change is disproportionately caused by global superpowers, but Costa Rica disproportionately loses with diminished biodiversity.

Another realm in which United States policy has a direct impact on life in Costa Rica is immigration. Immigrants account for 9 percent of the population of Costa Rica, including refugees and migrants, many of whom are hoping to make passage to the United States. The shock waves of changes in United States immigration policy will certainly be felt here.

Read more: There’s no such thing as a ‘pure Costa Rican’

Monteverde has proven a welcoming and inclusive home for my family this year, in large part because our neighbors aren’t the type to sit back. Perhaps like other communities heavily populated by immigrants, they understand that society works when everyone chips in. The march was a good reminder to me and my family that though we are on leave from icy roads and snow shoveling this year, there’s no taking a break from political involvement. Healthy democracies demand the constant engagement of their citizens.

So, when a Monteverde friend reminded us of the U.S. congressional switchboard number after the march, we pulled out a pen and wrote it down. We’ve signed up to participate in the Women’s March “10 Actions for 100 Days” campaign. And we can already see the increased vigor in the step of Monteverde’s many activists. As President Obama said, “Democracy is threatened whenever we take it for granted.” I am grateful for the reminder.