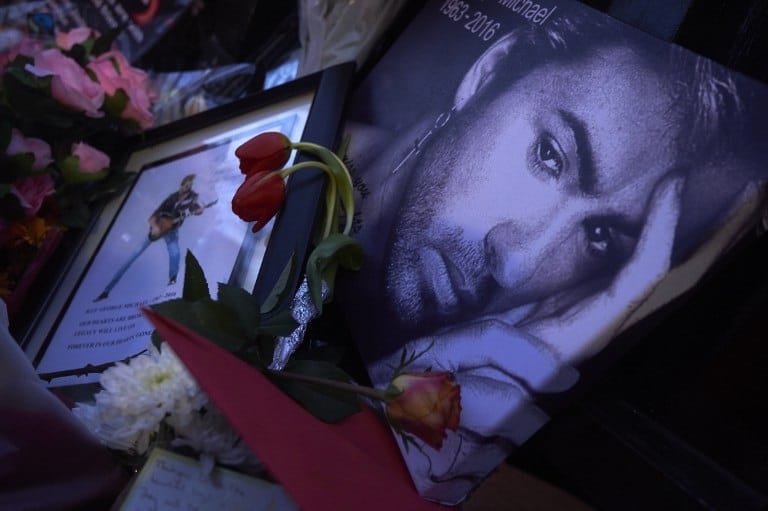 My compassionate husband must have sensed by my laughter at 7pm on Christmas Day that I had not yet heard. As I was just settling into my home office, checking holiday emails, he called me into our bedroom and quietly shared the news: George Michael was dead at 53.

I, of course, denied it, confident that it was a media ploy – my hubby had certainly fallen prey to the tabloids. I chewed my nails as I went back to my office and opened Facebook; the knot in my throat already there as I began reading the outpouring of sorrow. I finally accepted this horror as tears coursed along the crevices of my lips and the full brutality of 2016’s sharp claws seized my heart.

George Michael, along with Prince, were the musical bookmarks of my entire adolescence, and their songs etched the narrative textures of my growing life. Their deaths, within a single year (among countless others), cause me deep pause about what 2017 will hold. Yet the only way not to despair is to go back into my trove of memories to savor the power and passion of George Michael.

Imagine: It is May 1988 in sweaty Brooklyn, New York. Already the temperatures have risen into the high 80s as the humidity leaves us limp, especially in the coarseness of Catholic school uniform skirts which dust past the knees. I am 17 and a senior in an exclusive all-girls high school, one of six girls of color in my graduating class.  The anxiety that plagued many of us all year was not the anticipated college acceptance (I had my Vassar College admission in hand by January of that year) but who would we take to prom? What young, virile man, holy and forbidden in the walls of my school yet a creature of much interest, apprehension and daydreams, would hoist us out of the daily grind of academic competition within this cloistered enclave?  Prom was only a month away.

Alas, on that May day, I was filled with joy. Not only was I on the way for a fitting with my dressmaker but I had also won the golden ticket – a prom date! A fellow Latina classmate of mine had managed the unthinkable: she had a slew of male cousins who has a friend, a Costa Rican living in Brooklyn, who readily agreed to take me to Prom.

With his power-bar mustache and slicked back black hair and dimply smile, Rafi (not his real name) was the tangible manifestation of success for me, as dating has never been part of the parental language of my Tica mom and Panamanian dad. It was my “Tica-ness” which made him willing to accompany me, a stranger, to prom.

I did not know how to embrace that newly acquired identity as an Afro-Latina as I was carried along in the current of a new world of Spanish-speakers, fully embraced as if I had always belonged in a Brooklyn-stew of Dominicans, Puerto Ricans, Costa Ricans, Panamanians and Cubans.  I was amazed, shy, unsure, new as an “insider” in Brooklyn Latinidad.

Rafi and I began to meet at the dressmaker’s during my fittings. Our stilted conversations outside of the dressmaker’s window, fighting for space above the loud cumbia music playing in the background over police sirens, were all about matching tuxedo colors and limos.

The rest is a fast forward in vagueness: my mom taking “cute” couple pictures of us. Me in my turquoise and black satin flamenco styled handmade dress with enough black lace to have made Madonna proud, accessorized with black gloves and kitten heels, swept hairdo with curls and enough blue eyeshadow and mascara to have given Cindy Lauper a run for her money. Breathless giggles carrying me into the waiting limo with my best girlfriends inside – each with a live, male prom date alongside. I decided on that evening to leave my glasses at home and the world was a haze of shapes, sounds and feelings. I remember a lovely hotel ballroom, laughter and the blaring DJ.

As the night progressed, the dance floor cleared, under the pressing eyes of Sister Margaret and Sister Carissa, when the fast paced pop music turned into a slow, melodic hum. And there it was, my song, the first strains lifting the hair on the back of my neck. George Michael’s “One More Try.”

Rafi stood in front of me, hand raised in an invitation. My hands, covered in black elbow length satin gloves (how can we find fault with the 80s?), shook as I followed him to the dance floor.  We were the solo couple, the focus of every gaze, but the only thing I remembered as I sang in my head lyric after lyric, “Cause teacher, there are things that I don’t want to learn/and the last one I had/made me cry” was my first kiss; a gentle statement.

With that, I entered the world of “those who had been kissed.” I had made it to the other side: a seemingly innocuous moment that in the world of a sheltered 17-year-old brown girl in a Catholic all-girls school in the 1980s was rather revolutionary.

George Michael’s searing lyrics in their tender, time-worn repetition from that day until December 25, 2016 has been a gift of innocence, embodying the possibilities of our youth and maturity.  His music grew alongside my life, always the go-to on YouTube for the all-night paper grading sessions I dread as a professor. Thirty years later, my sister and I can still easily collapse into giggles on Skype talking about our Wham-loving days: she in Brooklyn, I in Costa Rica.

I bow today, in sorrow, to the light that has gone out. George Michael, singer, songwriter, icon, human who inspired us to remember our life force as we sing along with his songs that span decades of mastery. And so it is a bittersweet goodbye.

Rest well, young George. You have been taken from us too soon.

Alejandro Zúñiga - Apr 02, 2020
Do NOT follow this link or you will be banned from the site!