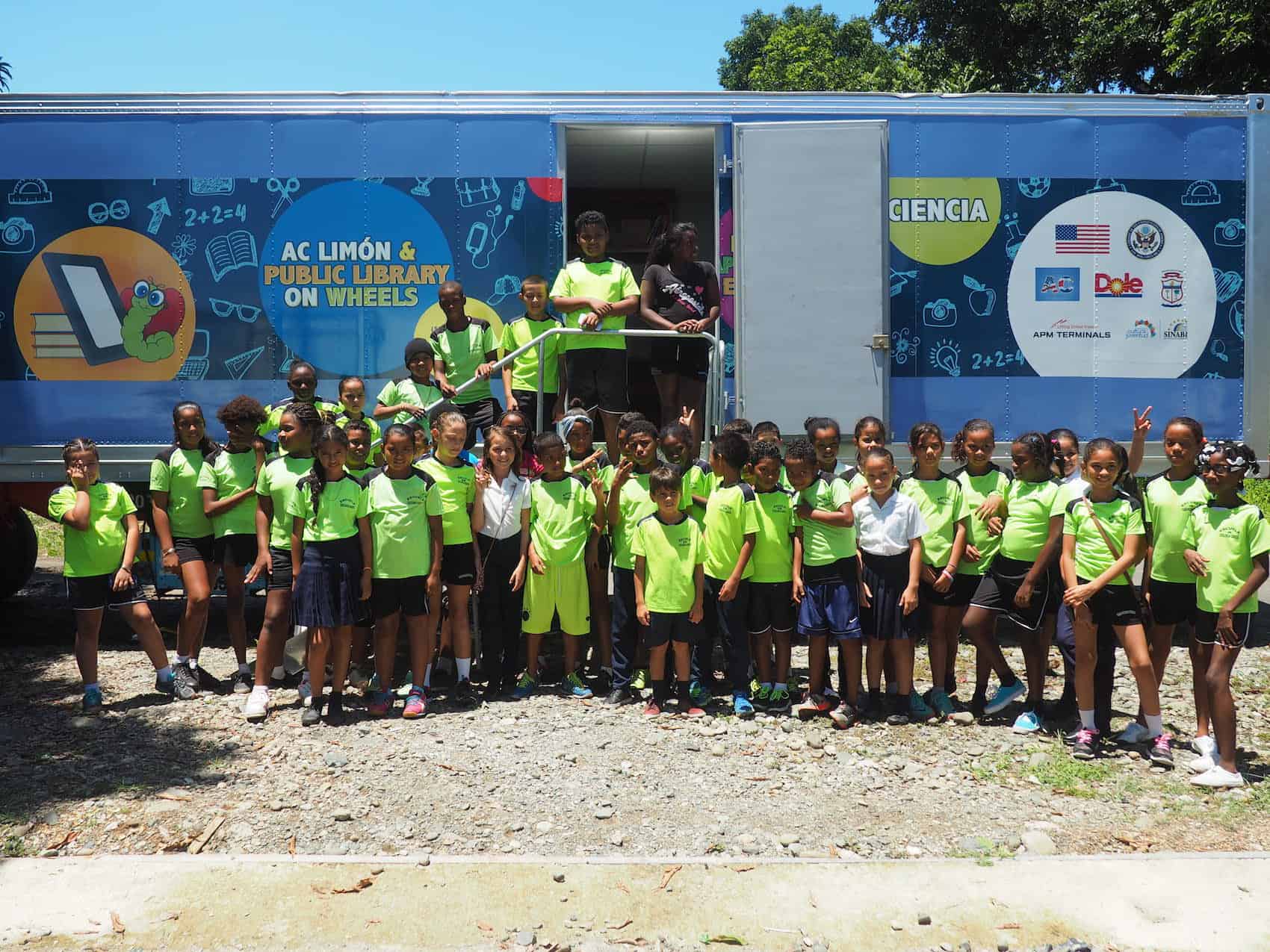 The heat is shimmering on this late Friday morning in the sleepy town of Cahuita on Costa Rica’s Caribbean coast.

As I drive towards the sea, a brightly-painted truck comes into sight, parked at the entrance of the Escuela Excelencia Cahuita, the town’s biggest school. But there’s something odd about this truck; Rather than a picture of bananas or the name of a shipping company painted on the side, its logo shows books and devices.

It’s a library, on wheels! The newly launched mobile library, which is sponsored by the U.S. Embassy, the Limón public library, Dole and APM Terminals, had arrived from Limón for its inaugural visit to Cahuita.

The mobile library offers newspapers, books, educational games, computers and even Wi-Fi for children and adults in communities across the Limón region.

As I walk towards the truck, Margaret Simpson, 46, the initiator of the project and director of the Thomas B. Lynch Public Library of Limón, peaks around the corner of the truck, shouting with a big smile: “Wait a minute, we’re not ready for the schoolchildren’s visit yet!”

The pura vida delay offers me time to explore the bus before the kids get in. As I look around, Margaret explains that everything inside — furniture, books, tablets and computers — were donated by the U.S. Embassy. Dole donated the container and APM Terminals, the company building Limón’s new container terminal, facilitates the driver, power generator and vehicle maintenance. “They even offered to clean it!” Margaret said.

“This is the first bus of its kind in the country,” she proudly adds.

The schoolchildren outside are already waiting nervously in the shade to enter the library. “It’s too difficult for the people here to come to the library in Limón,” Margaret says, “so that’s why we want to organize it the other way around.

Besides fomenting reading, the mobile library is meant to broaden Limón residents’ access to technology. “It should trigger their reading habits, creativity and imagination too,” Margaret says. Kids read in the mobile library during its stop in Cahuita. Kristel Segeren/The Tico Times

After the opening speech, the kids can finally storm the bus in groups. As they are being seated, Margaret and her co-worker Hermelinda make them read for five minutes and then briefly tell the group about what they read.

It’s hard for them to concentrate; some are distracted by all the new impressions, others are taking selfies while flashing the peace sign.

The tablets and computers, on the other hand, are a hit. The children play an English language game together. They barely even pay attention to the big screen in the back of the bus that’s broadcasting “Toy Story 3.”

After twenty minutes, time’s up; the next group is already waiting outside.

“I think it is a very nice truck,” says Nayr Bolaños, 12, as she’s leaving the mobile library. “I liked the games, but I couldn’t read a book in the time given. Reading is important for me, especially since I want to become a teacher.”

Teacher Esperanza Cortés, 46, is a fan of the devices in the mobile library. “We have a library at school, but it’s limited,” she said. “This bus brings us different technology, and it’s good that the children get in touch with that. They are learning in a different way. The only pity is they had little time inside the bus.” Sergio Rodríguez Mavin, 11, Nalbert Sánchez Garcia, 11, and his sister Sharon, 7, wave with the U.S.-themed pencils they received as they step out of the bus. They agree that they’d like to spend more time in the library.

All of them say the tablets and the games they played were the best part of their visit.

Margaret Simpson also thinks it would be best if the kids could just walk in and out of the bus as they like. “But right now we simply don’t have enough time with so many children, so this is just a meet and greet for them with the mobile library. Hopefully for the community, more encounters will follow.”

The mobile library will continue to tour Limón province. Next month it will make a visit to the Finca Educativa Shiroles in Talamanca. In November, a stop at the prison in Limón is being scheduled.