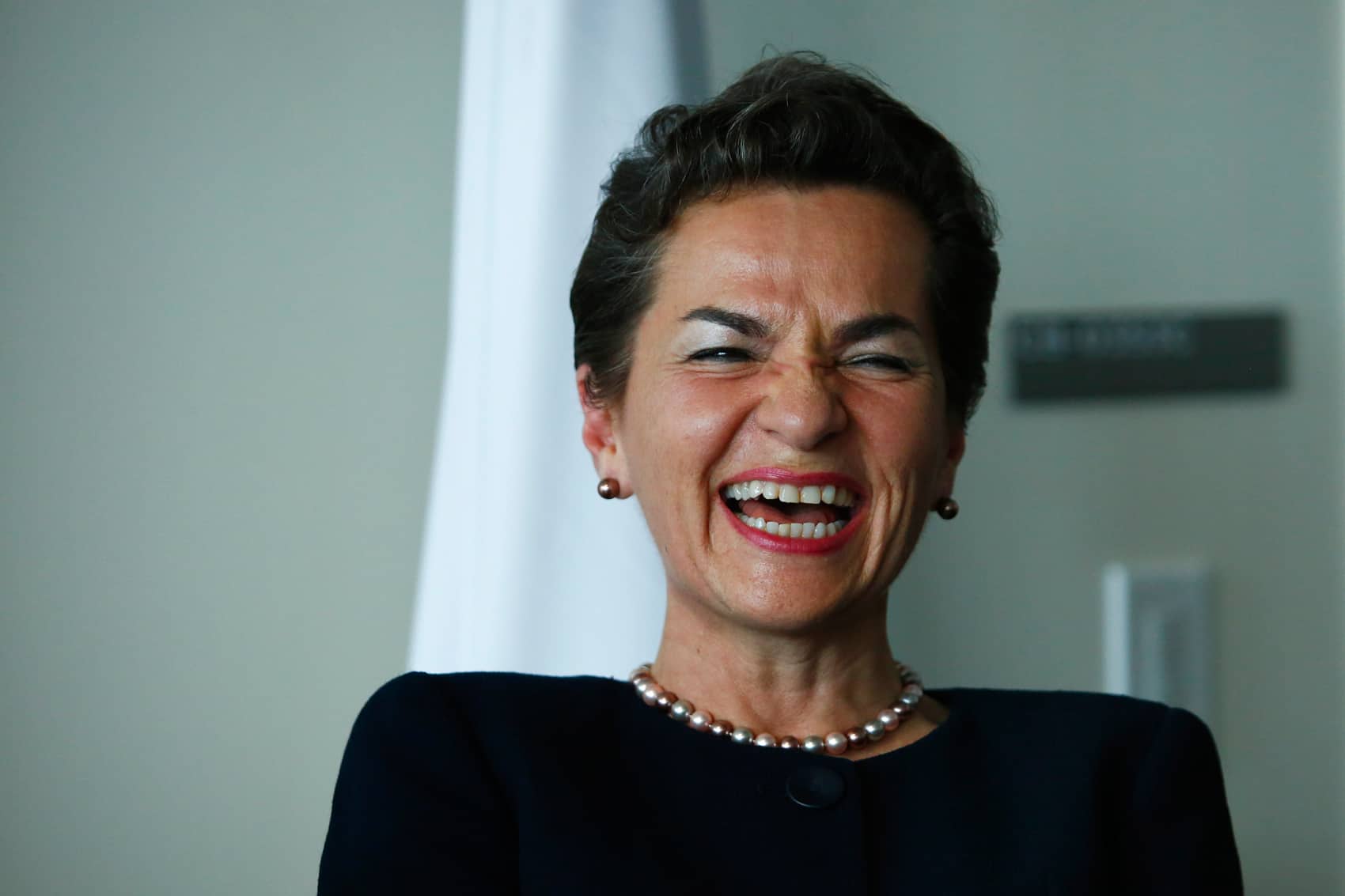 Christiana Figueres reacts as France's President Francois Hollande speaks before giving Figueres the "La legion d'honneur", the medal of honor, at the United Nations after the Opening Ceremony of the High-Level Event for the Signature of the Paris Agreement April 22, 2016 in New York. (Kena Betancur/AFP)

Former NASA astronaut Franklin Chang welcomed Figueres on stage, where she spoke of the world’s great challenges, which she said have been amplified by climate change.

“Without optimism there is no victory,” she said, echoing the perennially positive attitude she held throughout years of thorny negotiations aimed at saving the world from climate catastrophe.

Figueres was executive secretary of the U.N. Framework Convention on Climate Change during the historic talks in Paris last year. Figueres was one of the principle figures who helped shepherd 195 countries to arrive at the Paris Agreement, a pledge touted as having resolved decades-old disagreements between rich and poor nations over how to best halt the negative effects of climate change.

Public service and diplomacy in the blood

Figueres is the daughter of three-time president José “Pepe” Figueres, widely known as the architect of Costa Rica’s modern democracy. He famously abolished the armed forces in 1948 and oversaw the implementation of broad education and health care initiatives that have made Costa Rica a global example in human development.

Cristiana Figueres was born in 1956 and attended Lincoln High School, where The Tico Times was founded. She studied anthropology at Swarthmore College in Pennsylvania and received a master’s degree in social anthropology from the London School of Economics.

In 1994, Figueres entered the world of environmental diplomacy, becoming director of Renewable Energy in the Americas (REIA), an initiative housed at the Organization of American States. The following year she founded the nonprofit Center for Sustainable Development of the Americas, where she worked on national climate change programs for countries throughout Latin America.

Figueres served as a member of Costa Rica’s climate change negotiating team at the U.N. from 1995-2009. She was appointed executive secretary of the United Nations Framework Convention on Climate Change in 2010.

Figueres has received numerous awards and international recognition for her work on climate change. Last year, she was awarded the Medal of Paris for helping broker the climate change mitigation deal in that city. Time magazine named her one of the 100 most influential people in the world in 2016.

Campaign to elect a woman secretary-general

If appointed, Figueres would be the first woman and the second Latin American, after Peru’s Javier Pérez de Cuéllar, to lead the U.N.

Figueres’ nomination comes at a time when there is a groundswell of support for electing a woman to become the ninth secretary-general. More than 50 countries, including Costa Rica, have publicly said they support a woman candidate to head the international body.

Figueres was among several women shortlisted by the Campaign to Elect a Woman UN Secretary-General. The campaign argues that women are too often excluded from top management positions, despite the fact that they are often the focus of development assistance programs. Plus, women make up roughly half the world population.

Figueres becomes the 12th candidate to take over Ban Ki-moon’s job. The U.N. Security Council will begin the process of considering candidates on July 21.