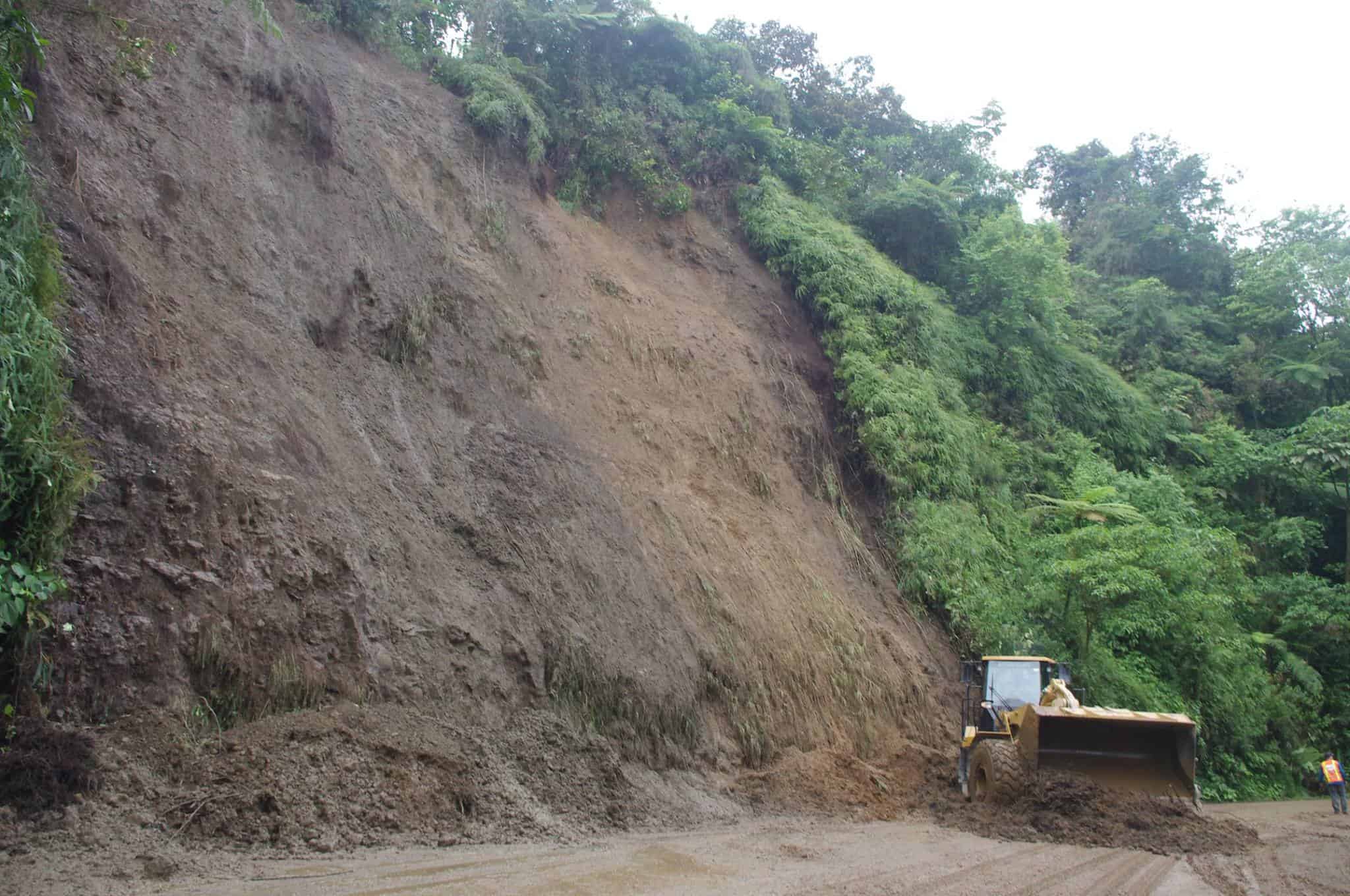 Workers on Friday began clearing landslide debris in at least 25 different locations on the Braulio Carrillo Highway. ((Courtesy of MOPT))

With this morning’s rising sun and settling mud, rescue crews and officials from the Public Works and Transport Ministry (MOPT) were able to evaluate the massive damage caused to Route 32. La Nación is reporting that some 2,000 people were evacuated last night, a figure much higher than original estimates of 380. In addition, the newspaper cites MOPT officials calling the number of landslides on the highway – anywhere from 25 to 40 – “unprecedented.”

It is without precedent. Furrows were opened where before they didn’t exist. It’s an enormous amount of debris that has fallen. We believe the mountain produced a type of storm or tornado that uprooted trees and caused tons of debris to fall along with the water.

The highway will remain closed at least through the weekend while workers removed debris in several locations. Highway crews began clearing the road this morning at 5 a.m., but were forced to stop work at 2 p.m. because of adverse weather. They will return at 5 a.m. on Saturday morning.

MOPT officials said the much longer, alternate route through Turrialba remains open, but an alternate road through Vara Blanca and Cinchona is closed as of Friday evening, due to an accident. The Vara Blanca/Cinchona route is not ideal for semis and other large vehicles. However, MOPT said the driver of a semi or large truck decided to take a risk and ended up tumbling down a ravine, killing two people. The route will remain closed until the accident scene is cleared.

Stay safe out there, folks. Estimates of the number of motorists trapped on the highway on Thursday night ranged from 1,200-2,000. (Courtesy of MOPT)

A harrowing Thursday evening continued into early Friday morning for hundreds of motorists trapped on the Braulio Carrillo Highway that connects San José to the Caribbean port city of Limón. Heavy rains triggered multiple landslides that stranded  2,000 people for hours in the dark and rain. Miraculously, no one was seriously injured according to initial reports.

At least two – and possibly as many as 14 – landslides covered the highway with rushing water, tree limbs, rock and sediment in the late afternoon and into the night, trapping five buses, two ambulances, two Traffic Police patrol vehicles and four semis, as well as dozens of passenger vehicles, the daily La Nación and other media reported Thursday night.

Stranded motorists waited for hours as the rain continued to pound the rugged, mountainous terrain. Roadway crews cautiously made their way to the scene to try to clear a path wide enough for drivers to escape. Thirteen ambulances stood at the ready outside the blocked area, with some Red Cross rescue workers trying to reach the area on foot.

Finally, at 11 p.m., the first 50 people had been evacuated, according to crhoy.com:

Noticias Repretel said rescue workers were able to open a path for 70 vehicles to exit to safety. The remaining people, however, would have to spend a cold, wet, terrifying night waiting, Repretel said.

But by 1 a.m., La Nación had reported that the Red Cross successfully evacuated everyone.

The first of the landslides occurred about 10 kilometers east of the Zurquí Tunnel. The debris struck a semi, temporarily trapping its driver, who was shaken up, but not seriously injured. Repretel reported that a second vehicle also was damaged and covered with falling tree limbs and other debris.

David Meléndez, director of emergency response at the Public Works and Transport Ministry, told La Nación the situation was “highly dangerous,” for both rescue crews and stranded motorists.

Route 32 – a major transit highway for both goods and people – will remain closed on Friday while experts assess the damage and potential risk of additional landslides. Route 10, an alternative road that leads through Turrialba, remains open, although there are slide risks in that area as well.

More photos and a news video of the emergency: