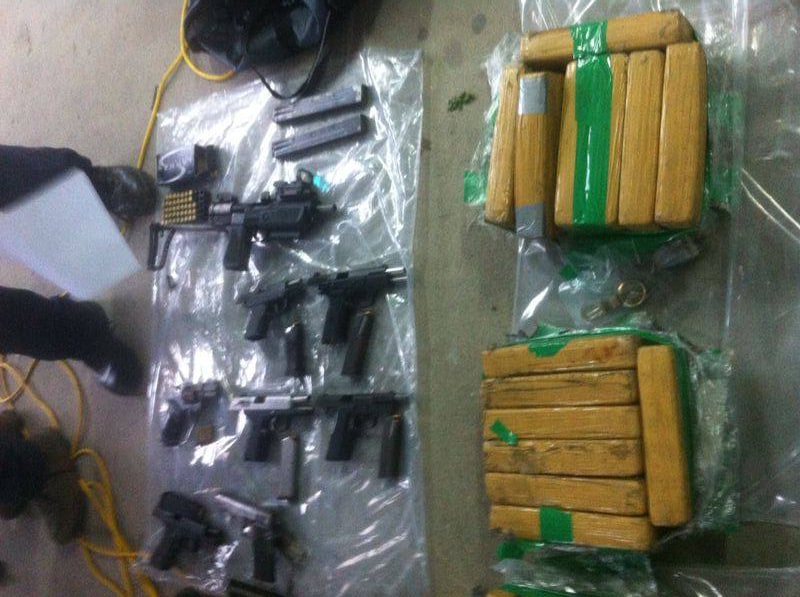 Some of the 121 kilos of cocaine and guns National Police discovered in a van in Cuervito, Puntarenas, on Sunday, near the Panamanian border. ((Courtesy of Public Security Ministry) )

Costa Rican police arrested six men near the country’s southern border with Panama with cocaine, guns and four vests bearing the initials of the U.S. Drug Enforcement Administration, according to a statement Sunday.

At a press conference Monday morning, Public Security Minister Celso Gamboa said authorities found 121 kilograms of packaged cocaine and several guns in a white van transporting three Panamanians in the possession of four vests bearing the letters “DEA.” Inside the van, police also found emergency response sirens. The minister said the Panamanian suspects appeared to have stolen the drugs and possibly the weapons from two Costa Rican suspects, a father and son with the last names Campos Morales and Campos Torres, respectively, who were found beaten in a truck in Cuervito, Puntarenas. The two Costa Rican men also were taken into custody.

National Police stopped the van in La Cuesta, Puntarenas, near the Panamanian border. As police approached, the suspects began throwing packages of cocaine out of the vehicle’s windows. Along with the cocaine, police discovered 10 weapons, including several 9 mm pistols and submachine guns.

A sixth suspect, whose nationality police did not name, was arrested later in Panama, according to an updated statement from the ministry.

The vehicle was taken to Paso Canoas for further investigation. The suspects have been handed over to the Prosecutor’s Office.