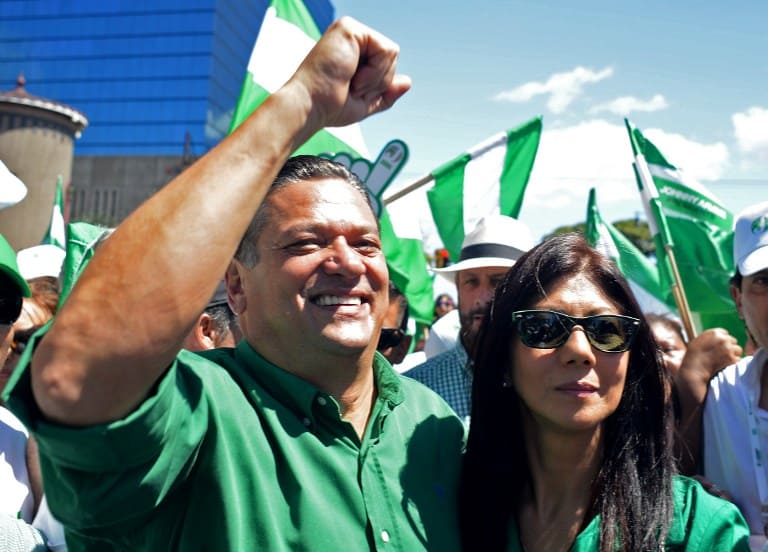 Costa Rican presidential candidate for the ruling National Liberation Party Johnny Araya, left, raises his fist next to his wife, Sandra León, during the closing rally of his campaign in San José on Jan. 26. He lost his home turf to rival Luis Guillermo Solís. (Ezequiel Becerra/AFP)

Johnny Araya, the ruling National Liberation Party’s candidate for president and a poll leader heading into the Feb. 2 vote, promised Sunday to lead an administration with a “social face” if elected. Araya made the statement during a San José rally to wrap up his campaign.

“I am committed to having a more supportive administration with a social face,” Araya told a crowd on Paseo Colón, in the west of the capital.

Araya, an agricultural engineer with a political career that has lasted more than 30 years, hopes to replace outgoing President Laura Chinchilla, also from the PLN, who will wrap up a four-year term with low approval ratings, economic shortcomings and accusations of corruption within her administration.

“We want to promote an adjustment to this country’s development model, to have a country that is in greater solidarity (with the poor), that produces more, and that distributes (wealth) more,” the 56-year-old former San José mayor said.

“Se oye, se siente, Araya presidente,” thousands of supporters dressed in the party’s green and white shouted, a Spanish slogan that means, “It is heard, it is felt, Araya for president.”

The PLN has held Costa Rica’s presidency since 2006.

Araya’s campaign predicted he would win in a first round next Sunday, which requires capturing 40 percent of the vote.  According to three recent polls, however, none of the 13 presidential candidates have reached that number.

“We anticipate winning … decisively in the first round,” because “we’ve seen many Costa Ricans who are not liberacionistas supporting us,” Araya said.

According to the most recently published poll, put out by the University of Costa Rica, Araya leads among decided voters with 20.4 percent. His biggest current rival, José María Villalta, of the leftist Broad Front Party, captured 15.3 percent support in the poll, and Libertarian Movement Party’s Otto Guevara received 11.2 percent.

Araya also promises to reduce the fiscal deficit, which closed 2013 at 5.4 percent of gross domestic product, one of the highest in Latin America.

Some 3.1 million voters will head to the polls next weekend to elect the country’s president, two vice presidents and 57 lawmakers. If no presidential candidate reaches 40 percent, the two top candidates will head to a runoff election in April.