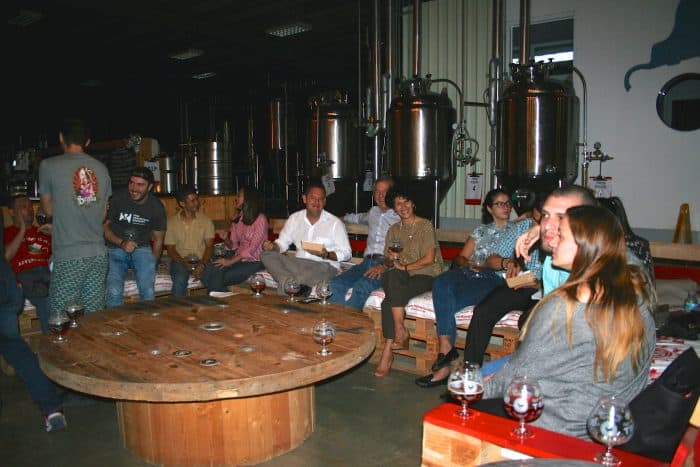 Craft beer lovers in Costa Rica have a new place to imbibe while mingling with kindred spirits, listening to great music and trying out some of Costa Rica’s best street food vendors. Treintaycinco Fábrica Artesanal de Cervezas recently began opening its brewery on the outskirts of Ciudad Colón to the public on Thursday nights.

Five hundred people showed up for the inauguration on Sept. 8, which featured beer from San José-based brewery Calle Cimarrona alongside Treintaycinco. The band Three for Blues provided the entertainment — from the top of a shipping crate — and three food trucks, including central San José’s popular La Ventanita Meraki, plated up hamburgers and loaded fries.

Treintaycinco’s Ignacio Castro said he and his partners had long wanted to offer brewery tours and have a space for craft beer lovers and local, independent brewers to gather.

In October of last year, they expanded production and moved to their current, 1,500-square-meter warehouse brewery, where they started setting up their dream brewpub. They call it “Salón Comunal,” or Community Room.

“We want it to be a space for the whole independent, craft beer community,” Castro said, “and a platform for small breweries that are starting out.”

Besides providing taps for other local breweries, Treintaycinco plans to invite craft brewers from abroad to join the Thursday night events. The first such event, on Sept. 29, will feature San Diego’s Stone Brewing Co., one of the premier craft brewers in the U.S.

Treintaycinco also has in mind events featuring certain types of beer, like India pale ale, in which all of Costa Rica’s craft breweries would be invited to share their best version with the public.

“The idea is to have a place where people can drink good beer, eat good food and do it in the most relaxed atmosphere possible,” Castro said.

Brewery tours are in the works. Castro said he and his partners hope to have a reservation system set up by the end of the month.

This week’s Salón Comunal event is happening Wednesday night, Sept. 14, instead of Thursday because of the Independence Day holiday. Treintaycinco will be sharing its taps with local craft brewers La Bruja and Bora Brewing Co. (read our story about Bora’s forced name change here).

Food will be provided by Central Pub, Delitruck and Agüizotes Gastro Pub, with music by local indie rock band Bipolar.

If you go:
Doors open at 6 p.m. Thursdays (but moved to Wed., Sept. 14, this week)
Treintaycinco is located on Calle Carreras, 10701 Brasil, province of San José
More information on Treintaycinco’s Facebook page.