Puente Sixaola: A border runs through it 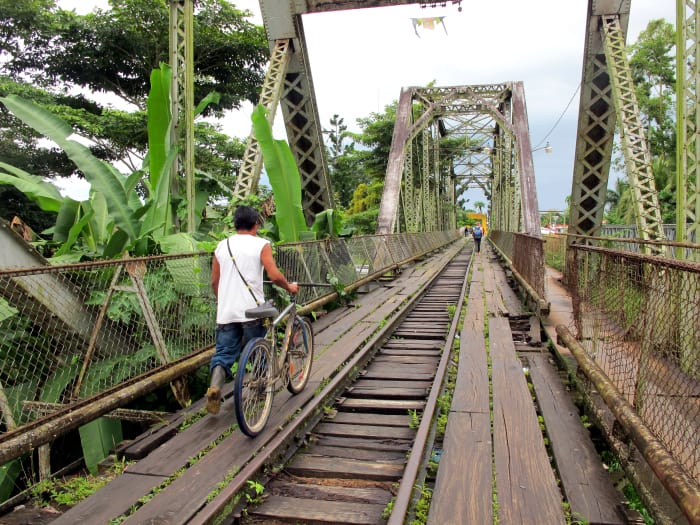 Two buses, one perplexing walk to the Mepe station, a taxi, and two boats is what it took for my wife Melanie and I to complete her border run from Ciudad Colón, Costa Rica to Bocas Del Toro, Panama. Simply typing it feels exhausting.

The border run, or simply known by Costa Rican expats as “the run,” is an obligatory trip across international lines to renew one’s 90-day tourist visa. Relying on the tourist visa is heavily discouraged, but inevitably ends up as the defacto lifestyle for many expats. Those who have gone through the trouble of gaining some form of residency love to shame those who continue risking it with the tourist visa. But for a couple of 20-somethings who have no permanent relocation plans and want to see all that this corner of the globe has to offer anyway, the argument is relatively moot and better suited for expat Facebook groups where you will inevitably find someone who truly knows everything about anything and then some. You will know when you’ve found this person, because they will tell you so.

After about nine hours on the road, we arrived at Sixaola to the border crossing between Costa Rica and Panama. The Mepe bus dropped us off along a nondescript road adjacent to the highway. There were no signs, but our smiling bus driver was happy to point us in the right direction with a cheerful “Allá!”

As we neared the actual border, a local chased us down immediately, trying to hand us something, and usher us into a nearby building. His baseball cap, shorts, tee shirt, and sandals didn’t exactly scream “immigration officer,” so we opted to verify with a nearby uniformed officer. After all, no one really talks to you when walking over the Canadian border at Niagara Falls — my only prior experience with international land crossings — except maybe a tourist asking for help taking their picture.

With our exit stamp secured from the grumpy-looking gentleman, we continued ahead to the infamous Sixaola Bridge. Had there not been hundreds of people already crossing this dilapidated structure humorously referred to as a piece of international infrastructure, I would have assumed we were on a hidden camera show, waiting to be gagged. The fact is, Costa Ricans and Panamanians crossed with ease as if they had the holes of the bridge down to muscle memory. Only we gringos foolishly lugging wheeled luggage had to take our time, watching every step with the same meticulous care a doctor might take during open heart surgery. This was a shame, not only because of the brief glimpses of certain death below, but because the landscape is actually quite beautiful with the sun setting just over the river. Not to mention the historic bridge itself was clearly a looker in its day and possibly could be again.

Turns out this crumbling structure of wooden planks and metal is actually an elevated railroad. Though to call this a railroad is an insult to actual rail networks that connect to other, y’know, rails. Not merely slabs of concrete and gravel. However a closer examination of the bridge revealed dusty tracks that, indeed, existed though clearly had been long ignored.

Suffice it to say, the bridge looked its age. This puente ferroviario was originally constructed in 1908, and any passerby can see it has largely been left to rot despite maintenance being the shared responsibility of Costa Rica and Panama.

The respective national governments did come together in recent years to build a new $3.2 million bridge at 260 meters long over the Río Sixaola with an estimated lifespan of 25 years, hoping to eventually find a more permanent solution. This unremarkable, but much more stable-looking bridge stood alongside its old sibling, but was blocked off from pedestrian use. Rumor was that this new bridge that had worried officials for its brief estimated lifespan, which was already having issues. Luckily, at least in this case, pedestrians are trained to be inconvenienced. Puente Sixaola may look as if it will go the way of the Millennium Bridge at any moment (sans Death Eaters, of course), but at least it can’t sideswipe you off the sidewalk.

Thankfully, we managed to get across without taking a dip into the Río Sixaola below. What followed was more confusion and more men not dressed in uniform insisting they wanted to help us. One such gentleman, noticeably taller than anyone else in the vicinity, pointed us into another decrepit building. This at least had “Bienvenidos a Panama” painted on the side with a beauty to it that clashed with the surrounding area, and offered some assurance that the following proceeding would be legitimate.

Inside sat two immigration officials looking as equally disgruntled as the Costa Rican we had just left. With minimal conversation, we received our stickers for Bocas del Toro and were off.

This is when disaster could have struck. A casual traveler might think that was all that needed to be done.

“They opened my passport and put something in there. I’m set!”

We were warned by previous Bocas travelers not to have such crazy thoughts. In fact, this is merely step one of two. After retrieving the Bocas sticker, we were meant to head down a makeshift staircase constructed alongside a slope of land, continue past a gravel parking lot, and to the lower level of what looked like one of those heinous, architecturally insulting shopping plazas my home country has had the misfortune of bestowing upon on the world. This is where we were to actually enter the sovereign nation of Panama by explaining our travel plans and receiving our entry stamp. Not a sticker mind you — a stamp, you silly and foolish person. You absolutely cannot confuse the two (and nowhere is this explained, of course).

From there, our aforementioned large gentleman in a tee shirt, khaki shorts, and sandals had already arranged our taxi — $15 per person to Almirante where speed boats finish the trip to Bocas del Toro. Travel guides say you can get a taxi for less, but it felt weird to haggle over $10 for what was already an insanely cheap rate for a 45 kilometer drive that would have costed over $100 back home. Plus we knew the drive was supposed to be an hour and we were informed that the last boats would be leaving Almirante in 45 minutes. We were in no place to barter when there was already someone in front of us more than willing to drive recklessly through the northern Panamanian countryside to ensure a couple of gringos successfully completed their poorly planned trip.