Parque Reptilandia: Komodo dragon, anaconda and tortoise, together at last 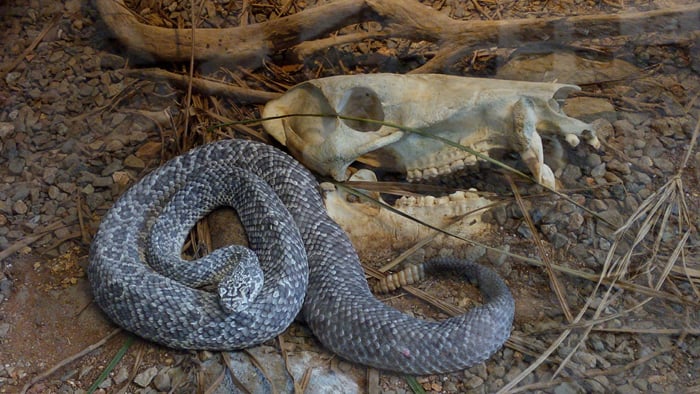 A chameleon rattlesnake with a peccary skull at Parque Reptilandia near Dominical. (Karl Kahler/The Tico Times)

DOMINICAL, Puntarenas — The soft-spoken Flemish man who gave me a tour of Parque Reptilandia on Tuesday started out by unlocking windows so I could take pictures of bright green South American tree boas.

“They are not dangerous but they have long teeth,” said Roel de Plecker in his understated style, before moving on to snakes that actually were dangerous. We came to an exhibit identifying some kind of rattlesnake, and he said, “This I cannot open.” Not that I wanted him to.

But he opened the windows for a few other deadly snakes, including the brilliant yellow eyelash pit viper and the much-feared fer-de-lance.

“Don’t put your hand in the cage,” he said as I moved in for a picture. But then he added, as if to indicate they weren’t very hungry for tourists, “They ate on Friday.” Roel’s droll delivery was all the more amusing because he wasn’t trying to be funny. He appeared to be perfectly comfortable living on the edge of two worlds, reptile and human, and he was in the perfect spot to do so.

Parque Reptilandia, 10km from Dominical on the highway to San Isidro, calls itself Costa Rica’s largest and most diverse reptile park, with about 70 species of all kinds on display here, and about 400 individuals. Few fans of creepy-crawly things, from snakes to lizards to turtles to crocodiles to the only Komodo dragon in Central America, will walk away disappointed.

Of course, there are some people with moral objections to any kind of business that puts animals on display for human edification, and those people would probably not like this place. Roel said the public can watch the snakes being fed rats and mice, which are also bred here, every Friday from 10 to 3. He said they eat only once a week because of their slow metabolism. The larger animals, like the Komodo dragon, anaconda and pythons, are fed chicken and other meats, as well as rats.

Roel grabbed a snake handle in case we needed it, and I asked if he was an experienced snake handler. He said he’s never been bitten, at least not by a venomous snake.

He showed me a boa that was pregnant — a refrain he would often be repeating, as the park breeds almost all its species. “See how the scales are a bit apart from each other?” he asked. “That’s because of the babies. Boas are live bearers, so the babies get born in the mother and then she drops them.”

He showed me a harmless tropical milk snake that mimics the coral, with its red, black and yellow coloring. “We don’t keep coral snakes because they’re very hard to keep,” he said. “They eat snakes and other lizards. So these (milk snakes) mimic the coral snakes, but they get bigger than coral snakes. They also eat coral snakes.”

As at any herpetarium, some snakes were hard to spot or photograph, as they were lurking inside logs or behind foliage.

But a couple of snakes appeared to be posing for glamour shots, notably the tree boas, the vine snake and the rattlesnake that was coiled front and center next to a peccary skull. “Chameleon rattlesnake, they call it, that’s because they get darker at night,” he said. As for the desert-like enclosure, he said, “We like to imitate habitat, it’s better for the animals and nicer for the eye.”

We moved on to a display containing turtles and poison dart frogs. I asked Roel if he ever touched the frogs.

“No. They don’t bother really me, I’m pretty resistant, but some people feel numbness,” he said. “They’re not as toxic as the Colombian ones. There’s one in Colombia, if you touch him, you die. Or three species, deadly to humans. These can get you sick, though.” He added, “It’s always advisable not to touch animals.”

The park’s collection is a mix of local and international species, many of them traded with zoos through exchange programs.

Roel showed me a black bushmaster, saying it was one of the largest vipers in the world.

“Bushmasters are a bit shy creatures,” he said. “We have to keep them dark, and they always go in caves.”

Perhaps the park’s most spectacular serpent is the 5m (16-foot) green anaconda, though it was lurking underwater and we could see only one patch of its giant body. The photos Roel shared with me later, though, were amazing. He said the anaconda is the heaviest snake in the world, and he estimates this female’s weight at between 80 and 90 kilos (175-200 pounds). She hails from Suriname, and her name is Shakira.

We also looked at an American crocodile, though sadly the caiman that formerly shared its pond had died.

My favorite showoff was a Mertens’ water monitor, who put on an aquatic dance for me in her water tank, swimming and circling and seemingly even waving. Another standout was the Roti Island snaked-necked turtle, a native of Indonesia and an agile swimmer whose shell was completely covered in moss and who indeed had a long, snakelike neck. Roel invited me to climb over the rail into the African spurred tortoise enclosure. The three females were huddled in a shady spot, but Roel picked one up (with some difficulty) and turned her toward me. He plucked some hibiscus flowers, the tortoises’ favorite food, and she began to devour them with gusto. We came to a very cool-looking black water monitor, who stuck out his forked tongue at me.

“This is probably the most intelligent lizard in the world,” Roel said. “You can see it in his eyes.” But the pièce de résistance was a Komodo dragon named Langka, born in 2004 in Spain’s Canary Islands as part of an international breeding program. She stood there looking at me like the pit bull of the reptile world.

The species is endemic to five islands in southeast Indonesia, and is the world’s largest lizard. It’s known for having several strains of virulent bacteria in its saliva, as well as glands in its lower jaw that produce a dangerous toxin. Roel said a couple of weeks ago Langka (which means “rare”) laid 21 eggs, three of which were found to be fertile — though she’s never seen a male Komodo in her life.

“They call it parthenogenesis,” he said, referring to the ability of some animals to reproduce asexually. “It’s an adaptation in nature for isolated populations in some species.”

When we returned to reception, Roel introduced me to Quetzal Dwyer of New York, the owner of Parque Reptilandia. I asked him how long this place has been open.

“It’s been open to the public for 12 years, but far longer in building and permits and stuff like that,” he said. “But I’ve been in reptiles my whole life.”

“How did you get into reptiles?”

“It just happened,” he said.

As in the reptile kingdom, so in the human: It takes all kinds.