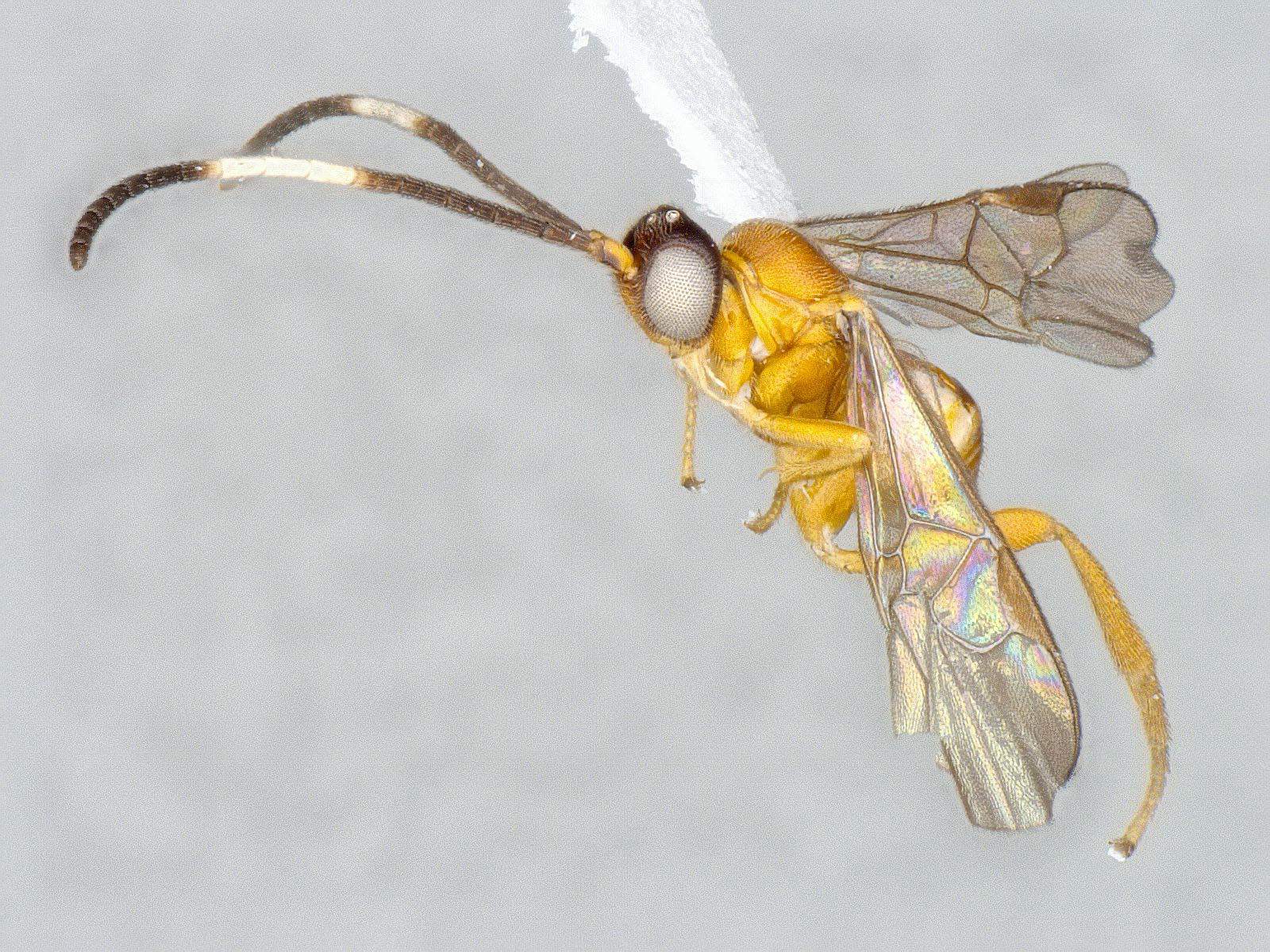 During his recent tour of the northwestern province of Guanacaste, Costa Rican President Luis Guillermo Solís was presented with a plaque featuring photos and a scientific description of what is no doubt one of his more unique legacies: a wasp species named in his honor.

Only 2.5 millimeters long, the tiny Pseudapanteles luisguillermosolisi is a type of parasitoid wasp that injects its eggs into a small moth caterpillar. The wasp larva then eats the insides of the host, thereby killing it a few weeks later. The larva then burrows out through the caterpillar skin and spins a distinctive small white cocoon outside, from which the new wasp emerges about two weeks later to repeat the cycle.

While such species are best known as biological control agents for pest caterpillars in crops, P. luisguillermosolisi is one of thousands of unknown species behaving this way in Costa Rica’s parks and reserves. In most cases, each species only attacks one species of caterpillar — they are very host-specific. The presidential wasp is one of 25 newly identified species collected in the Guanacaste Conservation Area (ACG) and placed in the genus Pseudapanteles. But instead of the typical dry Latin descriptors for names, the list of species in this genus reads like a Who’s Who of Costa Rican political and conservation history: P. laurachinchillae sits between P. mariobozai and P. josefigueresi. Its species description explains that P. luisguillermosolisi is morphologically similar to P. margaritapenonae.

“Each of these people, over the years, is someone who has done a lot of good things for Costa Rica’s conservation of the forests in which these animals live,” explains Dr. Daniel Janzen, technical adviser to ACG. “I wanted to, with that group of new species, honor a number of very upper-level decision makers.” Every staff member of ACG (about 150 people) also has a species of one of these small wasps named after him or her, in recognition of their contribution to conservation.

Conservation of a habitat begins with knowing what it contains and what happens there, Janzen says. “We want people to be aware of the whole package, not just the jaguars and the tapirs.”

A long journey of discovery

So how do you discover new species of barely visible parasitic wasps? First, look for caterpillars.

A team of 30 Costa Rican “parataxonomists” searches the ACG forests for caterpillars on a full-time basis — a career — as part of an ongoing ACG inventory of caterpillars and their food plants and parasitoids. Each caterpillar is placed in its own bag and every few days supplied with fresh leaves of its particular species of food plant.

At the time they collect the caterpillars, the parataxonomists don’t know if the insects contain parasitoids. (They are called parasitoids because they do eventually kill their host, whereas parasites generally just parasitize the host.) They’re only tipped off when they later see small white cocoons attached to the caterpillar or the food plants. A large caterpillar with the newly spun white silk cocoons of its parasitoid wasp still attached. The black dots are the scars of the wasp larval exits through the caterpillar’s cuticle. The caterpillar is “walking dead” and dies/decomposes within a few days. The adult wasps emerge in about 12 days. (Courtesy of Daniel Janzen)

Once the adult wasps emerge from their cocoons a few weeks later, they are preserved in alcohol and eventually transported to Dr. Janzen’s lab at the University of Pennsylvania. There, one leg is removed from the wasp in question and sent to the University of Guelph in Canada for DNA extraction. If the wasp DNA doesn’t match any of the roughly 10,000 DNA records of ACG insects, and a leading wasp taxonomist can also confirm that the species is unknown based on its physical appearance, a new species has been discovered.

The entire process — from the collection of the caterpillar to the publication of a scientific journal article introducing the new species — can easily take a few years. But the long process is well worth it, according to Janzen.

“Once you get a name on [a species], then you can start talking about the rest of its biology, and that can happen now. And it will happen now with P. luisguillermosolisi and other members of the genus,” he says.

It is currently estimated that about 600,000 species of plants, animals and microbes exist in Costa Rica, with roughly 40,000 of those described by science, according to Janzen.

“Despite the fact that we know a lot about the vertebrates and the plants of Costa Rica, there is a huge package of unknown species still out there.”