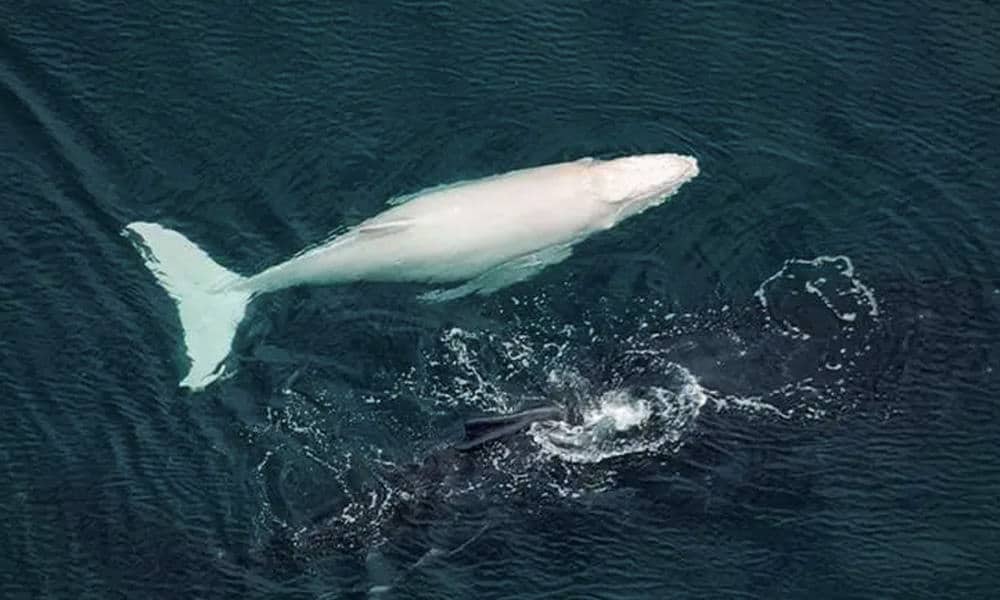 Last Sunday, at about 8:50 a.m., a pilot and photographer captured the moment when an albino humpback whale swam with its mother in the waters of the Costa Rican Pacific.

Felipe Chavez has been a pilot for 12 years and an aerial photographer for seven years. During a flight from Aranjuez de Puntarenas to Nosara, Guanacaste, he captured an image of something he had never seen before.

“We were heading down to Nosara, arriving at the coastline, and I told my friend we should look for whales; what we do is look for dips in the water. I saw something huge and white, and I thought it was trash because it is improbable to see something that big there,” he explained.

The encounter with this albino humpback whale is something unprecedented because only one in 10,000 of these species is born with this genetic disorder.

“We got closer and found that it was a whale, but we thought it was belly up. I immediately took out the camera and took pictures. We circled over the whale and confirmed that it was white, like ivory color, and it was something divine,” Chavez added.

Additionally, the pilot and photographer explained that initially, the creature was swimming calmly with its mother, which was black. After landing, he decided to make a second overflight. He and his co-pilot found the cetaceans swimming “relaxed” in the same area before diving again and disappearing underwater.

“The whales were about four kilometers from the coast; the water was very calm, and they just floated. The calf was not as playful as others I have seen. I think it is the first sighting of an albino whale in Costa Rica. It’s important because it is new in our country,” Felipe Chavez noted.

Frank Garita, cetacean specialist, and Gabriela Hernández, veterinarian of the National Animal Health Service (Senasa), confirmed that this is the first time an albino whale has been observed in Costa Rican waters.

“It is a rare event; it is estimated that one in ten thousand individuals may present albinism. It is the first time this is reported in the country, and the only individuals reported had been seen on the other side of the Pacific, in places like Australia”, said Hernandez.

Garita also explained that, worldwide, three other reports have already been registered in the Pacific. Still, all of them correspond to the Oceania region.

“This is the first report of a white whale in our country, but internationally in the Pacific, there are three reports of sightings. Although they are colorful, it is difficult to see them again; it is something unique,” Garita commented.

The specialist considers that the young whale is about a week old and, therefore, it is most likely that it was born in Costa Rican waters. This species can measure between five and seven meters. According to their migration records, the species will begin moving toward the southern cone.