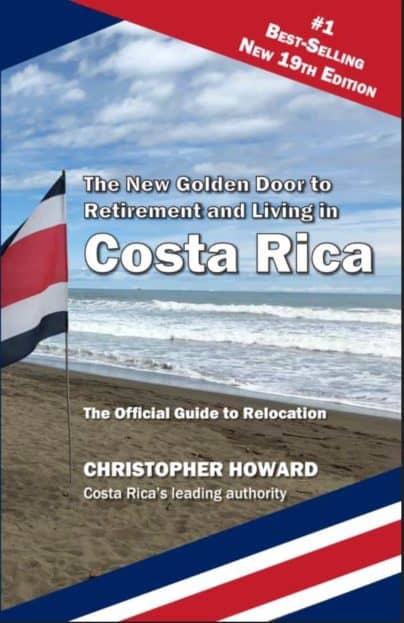 Over 40 years ago Christopher Howard made his maiden voyage to Costa Rica and it was love at first site. Have had lived and studied in Mexico, but his dream was to find his slice of paradise in some other part of Latin America. It turned out that Costa Rica more than fit the bill.

He relocated here in 1980 and the rest is history. Within a couple of years he founded a successful language institute but his life took a 180 degree turn. In 1988 while reading an ad in a U.S. publication for a book about retiring in Mexico, it occurred to him that no such guide existed for Costa Rica.

So, he put together a short 100-page booklet about moving here. Slowly but surely and after 18 best-selling editions his guidebook book evolved and improved into what it is today.

Christopher just finished updating the new edition of the 788-page guidebook,  “The New Golden Door to Retirement and Living in Costa Rica — the official guide to relocation.” Like all of Howard’s other books about Latin America, this new edition is published by his company, Costa Rica Books S.A.

All of the nuts and bolts, time-tested advice, insider information and contacts are included to make the move relatively  seamlessly.

In addition, there are anecdotes about expats experiences while living here and sidebars with practical tips.

A previous edition was featured on the cover of Publishers Weekly’s annual travel edition and was a candidate for the independent Publishers Group’s Benjamin Franklin Award for outstanding independent publishing.

As a result of his books popularity Christopher began to offer one-of-a-kind relocation/retirement tours to Costa Rica in the early 1990s. For details see: www.liveincostarica.com.

To purchase a copy of this new DIGITAL eBook see www.costaricabooks.com or soon on www.amazon.com in both kindle and hard cover formats.