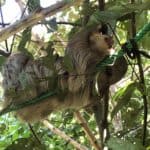 This Sloth Sunday is dedicated to the released two-fingered sloth moms that have been prospering since being in Toucan Rescue Ranch’s care. To start our celebration, here is Ellie and her little bundle of joy taking a midday snooze. Ellie was rescued in 2013 as an orphan and given a second chance at a life in the wild with the help of the Toucan Rescue Ranch’s Release Site team.

Her story is quite alarming. Ellie was confiscated by wildlife police in the streets of Heredia, Costa Rica. She was kept in a sack, her poacher was trying to sell her to someone as an illegal pet and she was covered head to toe in ticks. Since her release in 2018, she has built up the perfect sloth appetite of wild leaves and the skills required to live freely #backinthetrees. She and her 1-year-old baby continue to show us that cuddles with mom are the best medicine!

Next up is our fighter, Socorro. This special young lady was found on the ground after being hit by a truck. The aftermath of the incident caused Socorro to form a horrifying arm full of maggots and some exposed bone. While awaiting her rescue, it was believed that she was also attacked by dogs, a common danger that sloths face. So our vet team got to work on her arm amputation, and with the help of minor interaction, she was soon ready for release. This survivor proves that sloths are tough, resilient creatures that can survive with only three limbs! Socorro has since given birth to a beautiful baby and has been seen nestling up in the high almond trees alongside her newborn. 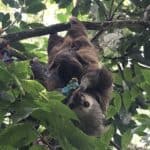 Last but certainly not least, is our beloved Pippin. Pippin arrived at our headquarters back in 2016 as a tiny orphaned baby, malnourished from missing her mom’s milk. Fortunately, she is now strong and ready to show Costa Rica what she’s made of! This image is of the breath-taking moment the Release Site team realized Pippin was no longer pregnant, but rather that her baby had arrived into the world! Now only 1-week old, baby Gandalf clings onto his mother’s chest while she feeds from the supplemental sloth hangers, filled with delicious carrots and green beans. During this stage, new sloth moms must gain a healthy diet and maintain stamina for protection against predators such as ocelots and snakes. We wish Pippin the best of luck with her newborn!

Since 2017, the Saving Sloths Together (SST) program enables orphaned, injured, or vulnerable sloths to be rescued, protected, rehabilitated, and released in Costa Rica. Forever maintaining staff dedication and successful release stories, the SST program is there to help keep sloths protected and out of harm’s way. Unfortunately, sloths undergo near-death experiences at an alarming rate. But with the help of our supporters and donations, these beautiful, graceful creatures can be given a second chance at life.

During the University stage of the Saving Sloths Together program (for those aged 1.5-years +), individuals graduate to a large pre-release enclosure, where they focus on eating wild foods, surviving in harsh weather conditions, and gaining total independence alongside their classmates. This is the final phase for all sloths before they are released into the wild.

The Release Site has faced many challenges since the start of the pandemic, creating hurdles of financial struggles and the halt of interns and volunteers able to help from outside the country. We are all living in very uncertain times. However, with the constant drive, dedication, and passion of its interns and staff, the site is moving forward with a chance to recover and succeed alongside its wildlife.

If you want to get involved with the rescue, rehabilitation, and release of sloths then please join us for the 5th Annual Sloth Ironman Games! Starting on October 20, in celebration of International Sloth Day, we will be announcing the sloth athletes for this year’s Games. Be sure to join us on Facebook, YouTube, or Instagram to learn more!