Two pensioners were stuck in Costa Rica during the pandemic. This is their story

When Marjorie (73) and I (78) left our homes in Spain on March 4, we were excited about our four-week trip around Costa Rica.

A travel company had arranged our vacation. We were on a tight budget, fit enough to do easy and moderate trails, and wanted to see as much wildlife and flowers as we could — and we definitely wanted to go zip lining.

We arrived in San José and were taken to our hostel. The first day, we went to Cartago on the local bus to visit the National Orchid Collection, which was well worth doing. The secret of traveling by bus in San José is to make sure you find the correct bus station — then it’s easy. 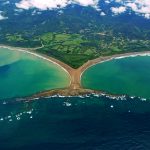 We took the bus to Uvita and the Marino Ballena National Park on the Pacific coast. Accommodation this time was in a cabin about 300 meters from the beach. It was an incredible experience to walk along the beach early in the morning to the Whale’s Tail, a spit of land stretching out into the Pacific Ocean. Our only companions at 6:30 a.m. were the hundreds of small crabs that scuttled back down their holes as we approached. As early morning walks go, this was very special and will stay in our memories for a very long time, as will our first experiences of Pacific sunsets.

Next stop was Manuel Antonio, which we again reached by local bus. We had one beach day, although for us the waves were too strong to swim, but I would have loved it if I had been younger. Manuel Antonio National Park is a must-do place. It’s very beautiful, and we saw a lot of wildlife. We had a guide and for the first time were staggered at their eyesight and hearing — they do not miss a thing.

Monteverde was next on our itinerary, and we arrived there by shuttle transfer driven by a lovely man named Phillipe. It was a long journey, but he made sure we had plenty of bathroom breaks on the way. The longed-for zip lining was the next morning; it’s fair to say we were very apprehensive, but the guides, Jason and Jordi, were efficient and calming — not at all put out by having two old ladies to look after. After the first practice run, we couldn’t wait to get on with the real thing, and we loved it.

The next morning, at the Curi Cancha reserve, our guide help me achieve yet another thing on my bucket list: the sighting of both a male and female quetzal.  Monteverde had certainly met our expectations.

When we left Monteverde, we were 10 days into our 4-week trip. We were very aware that the number of coronavirus cases was rapidly increasing in Spain and, to our horror, there was talk of a lockdown.

It was in Playa Flamingo where we started to really think about the implications of all that was going on in the world. Our accommodation was a self-catering apartment, which was a good thing, as the day after we arrived all the restaurants closed.

After sleeping on it, we decided that we would go to Bijagua, extend our stay there by a couple of days, and then see if we could travel on to the Caribbean coast as planned. How naive we were thinking this would be over in a week or so.

My family felt the best action would be to stay as planned until the end of April. Marjorie’s family just wanted her to get back to Spain as soon as she could.

For some reason, all I could think was that if we could get to Bijagua, everything would be all right. We prepared what we might need in the way of supplies when we got to Casitas Tenorio, our hotel, which is in a remote area. By this time, we both realized that we would probably have to stay there until Marjorie’s departure date.

At last we arrived at Casitas Tenorio and received a wonderful no-touch welcome. I felt relief; we were now home and safe. This relief did not last long. Within 30 minutes of our arrival, we both got emails saying our flights had been canceled.

Our tour agency canceled the rest of our trip and used the money to organize with Casitas Tenorio for us to stay put for the immediate future. They also contacted the Spanish and British Embassies for us.

Our first few days were strange. We couldn’t believe we were in lockdown in such a beautiful location in such close contact with so much wildlife.

We organized with the owners to take on some chores: leaf-clearing duties (a never-ending task in the rain forest), watering the vegetable garden and the numerous pots. We learned how to milk the cows, how to scald the milk for drinking, fed the chickens and collected eggs.

We learned from our wonderful hosts about the birds and animals we saw and about the rainforest and its conservation. When we were sure we were virus-free, we also spent time with the owners’ daughters, reading with them in English. In return, they gave us lessons in traditional Cost Rica dancing.

I was delighted when I started to develop what we called Costa Rican eyes – when I could tell the difference between the movement of branches due to the wind or due to howler monkeys, and when I spotted a toucan in the distance.

Fruit and vegetables were plentiful and delicious; we got quite addicted to mangos and the small, sweet bananas. We managed — with limited ingredients — to make some particularly good meals. We were also able to have a video consultation with a doctor and get medications couriered from Liberia.

Majorie’s original departure date came and went, as did mine. We settled into what we considered a wonderful life into mid-April, when, once again, we received news that our flight had been canceled. This time, we took the news in our stride; we knew we would get home sometime. We were happy, comfortable, and more importantly safe and healthy.

We had decided that we’d seriously start looking at flights for the beginning of June. Both of our families supported this decision, as they all felt Spain was not a good place for us to be as we both fell into the vulnerable category. In Costa Rica, except for waving at neighbors, we had no contact with the outside world; we were in our own beautiful bubble.

We did have two trips out. The first was to Tapir Valley. What an incredibly beautiful place that is! For us, it was a magical morning, and we found it wonderful that in Costa Rica so many people care so much about the environment. And at Heliconias Eco Reserve, looking down on to the rain forest floor, I half expected a tyrannosaurus to come out from between the trees. We never met the people who run it, but we could never thank them enough for letting us have the experience.

All good things come to an end.

In mid-May, we were offered a direct flight back to Madrid. It wasn’t an easy decision to make, but eventually, head overruled heart and we prepared to leave Casitas Tenorio and our cabin that had been home for 10 weeks.

The journey back was strange, to say the least, with empty airports at either end of the journey. Once in Spain, Marjorie temporarily moved in with me; after all, we had spent the last 12 weeks together. So we put ourselves in quarantine for 14 more days.

When we tell people about our lockdown, most people say, “How awful for you to have been so far away amongst strangers.” Our response is that we were lucky. We were staying in one of the most beautiful places we’ve ever been to, and we acquired a family that shared their wonderful home with us.

We came back having learned so much about our environment. What could have been a terrible experience turned out to be one of the best periods in our lives. I, for one, will be back to Costa Rica as soon as flights are back to some kind or normality. Bijagua will certainly be on my itinerary, as will zip lining – I just have to do that again.