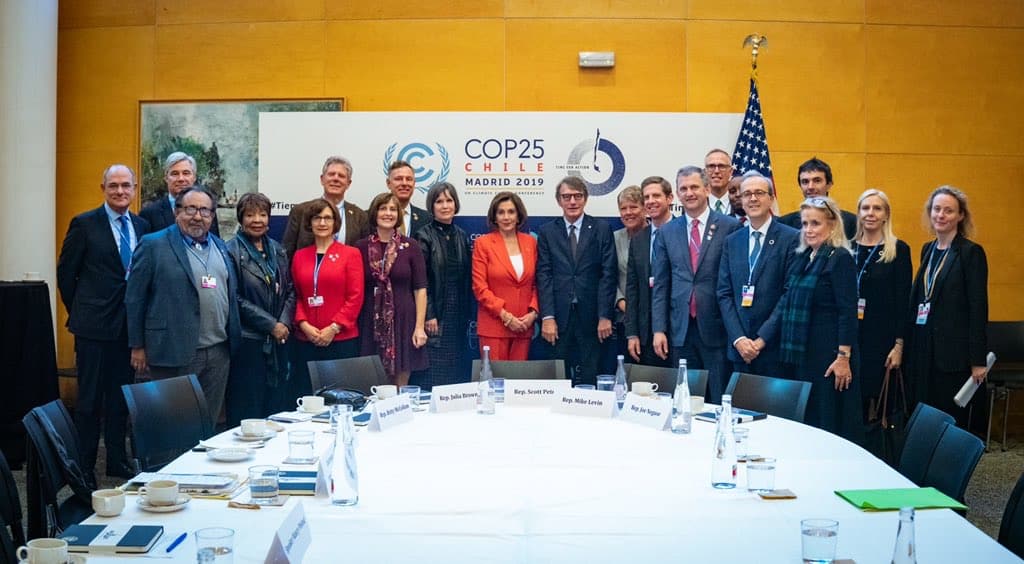 US Congressional leader Nancy Pelosi told a UN climate conference Monday that the world could still count on the United States in the fight against global warming despite Donald Trump’s decision to pull out of the Paris Agreement.

Pelosi and 14 other members of the US Congress were in Madrid to make the point that larges swathes of the United States are committed to the targets set by the 2015 agreement, as are most Democratic candidates for president.

“We’re here to say to all of you, on behalf of the House of Representatives and the Congress of the United States, we’re still in it, we’re still in it,” Pelosi said to applause at a forum of heads of state from climate-vulnerable nations.

“We see this as an existential threat,” she said. “We have not lived up to the challenge.”

Leading the 15-strong delegation, which included one senator, Pelosi came to the UN climate meet even as her colleagues in the House consider articles of impeachment against the US president.

Trump has dismissed global warming as a hoax, dismantling many of the climate and environmental protection policies set in place by his predecessor, Barack Obama.

Last month Trump gave formal notice of the US withdrawal from the 196-nation Paris climate treaty, which calls for capping global warming at well below two degrees Celsius, and 1.5C if possible.

The United States under Barack Obama played a key role in pushing through the 2015 pact.

“We have a moral responsibility to future generations to pass on this planet in a better way,” Pelosi said.

“We see climate change as a public health issue,” she said, standing along side heads of state from Costa Rica and Bangladesh.

“We see it as an economic issue because this is the way to new green technologies,” she continued. “And we see it as a national security issue.”

Moments before, UN Secretary General addressed the same room before speaking at the opening plenary of the 12-day meet, tasked with finalising the rules and procedures for the Paris deal, which becomes operational at the end of next year.

Virtually all Democratic candidates for president have made global warming a major issue in their campaigns. Some have called for ambitious climate “Marshall Plans” — massive economic aid — to help tackle the issue.

Nearly two-thirds of the US population and GDP is under states or sub-national regions committed to adhere to the Paris temperature goals, according to “We Are Still In”, a coalition of local governments, businesses and citizen groups.

“There is no doubt that a second Trump term of office would be a challenge not just to Paris, but to a whole range of multilateral agreements,” said Alden Meyer, director of strategy and policy for the Union of Concerned Scientists