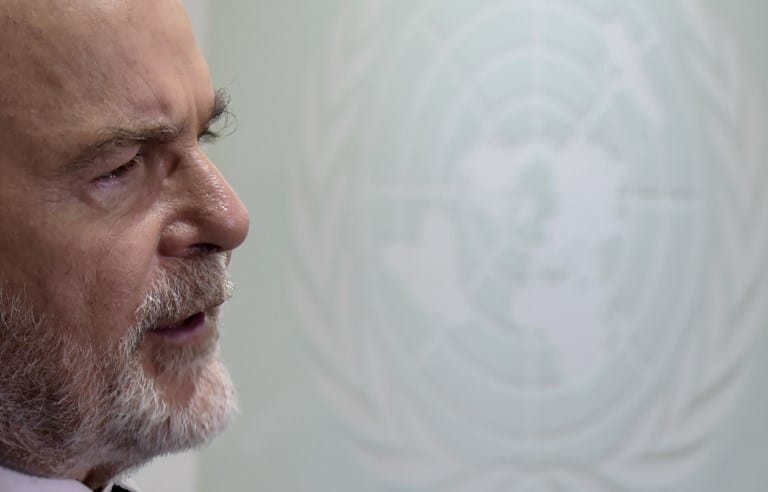 UN's Special rapporteur on the situation of human rights defenders, French Michel Forst speaks during an interview with AFP in Bogota on December 3, 2018. (Photo by Raul Arboleda / AFP)

A UN official called on the Colombian government to step up measures to protect human rights defenders following an upsurge in the number murdered since the signing of a peace agreement with former FARC guerrillas.

Michel Forst, UN rapporteur on the situation of human rights defenders, said in an interview late Monday that armed groups have filled a power vacuum left by rebels who disarmed after signing the November 2016 agreement.

Those armed groups —an amalgam of political dissidents, drug traffickers, organized crime groups and paramilitaries— “are now the main perpetrators or attacks against defenders,” he said.

“At the time there is a drastic drop in the number of homicides throughout the country, probably related to the peace process,” Forst told AFP. “There has been a sharp increase in the homicides of defenders.”

Forst said the broad spectrum of aggressors also includes members of the security forces, as well as random strangers encouraged by “relatively high” rates of impunity.

Flash Sale! Save 40% or more on top destinations for 48 hours only

“I have been horrified to hear the accounts of Afro-Colombian and indigenous farmers describing the attacks they face without being able to put a name to the perpetrators,” Forst said.

Right-wing President Ivan Duque, who took office in August, acknowledged the increase in activists’ murders, and pledged Monday to implement measures to prevent the killings.

“In recent years the number of murders have been growing and therefore it is very important that there is a reaction from the state,” Duque said in a joint press conference with Forst late Monday.

Forst promised to return to the country to monitor progress.

Colombia’s Ombudsman’s Office said 311 rights defenders had been murdered between January 2016 and June 30 this year —one every three days.