Truth Commission calls for support to investigate violence in Nicaragua 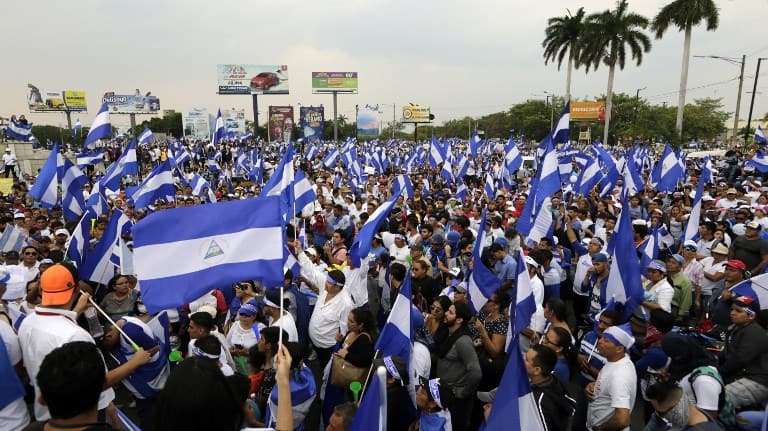 Demonstrators protest against the Nicaraguan government in Managua on May 9, 2018. Thousands marched demanding justice and democracy in a new demonstration against Daniel Ortega's government. (Inti Ocon/ AFP )

The Truth Commission created by the Nicaraguan Parliament to investigate the violent acts that have left 47 dead during anti-government protests in recent weeks, announced Thursday that investigation has begun and that the committee hopes to receive the support of the Inter-American Court of Human Rights (IACHR), based in San José, Costa Rica.

“To fulfill its mission, the Commission has established and will develop contacts with specialized organizations in human rights on the national, regional and international level, such as the Inter-American Court of Human Rights, as well as the appropriate authorities,” the commission said in a statement read by one of its members, Mirna Cunningham, at a news conference.

“We consider the collaboration of the Inter-American Court of Human Rights to be valuable,” explained another member of the commission, Adolfo Jarquín, who said members have sent letters to the court rapporteur as well to Nicaraguan President Daniel Ortega.

The rapporteur on human rights from the United Nations (UN) has also been contacted, he added.

The invitations must be issued by the Nicaraguan government, which has been pressured by various sectors within the country and by the United States to allow the participation of the Inter- American Court.

According to Jarquín, the government has not rejected the idea, as said last week, but rather that it “asked for time to advance” the organization of the Truth Commission and the implementation of national dialogue, for which no date has been set.

The Truth Commission was installed on Sunday by the parliament, dominated by the president’s party, to investigate the acts of violence that took place during anti-government protests that started on April 18 and have left 47 dead and more than 400 injured.

The commission said Thursday that it is preparing to investigate “the deaths, the wounded, the imprisoned, reports of missing persons, fires, and acts of vandalism,” as well as “destruction of private goods.”

“The Committee is ready to start receiving reports and evidence from sectors, with no exclusion, effective immediately,” Cunningham said.

The investigation, which will last three months, will include an analysis of the origins of the protests and “where this is going,” she added.

On Tuesday, a student coalition that has lead the protests characterizied the Committee as “illegitimate” and demanded the formation of a “pluralist, just and trustworthy” entity.