Much has been made for years – including in a recent National Geographic cover story – of Costa Rica’s position at our near the top of various international happiness rankings. The methodology of those rankings is a discussion all its own, but I know one thing for sure: there’s nowhere else I’d rather be at the end of the world than Costa Rica.

Why? Because I’ve yet to discover anything that this country can’t make a joke about, and am certain that as the zombie apocalypse sweeps the globe, the mushroom cloud appears and Preppers retreat into their bunkers, Costa Ricans would receive the disaster with as much calm and good humor as anyone possibly could, complete with something or other on the grill and some cold beers.

What we might call “gallows humor” in English is a fine art in Costa Rica, and this tendency has been accelerated in this age of Tweets, memes and gifs. Earthquakes tend to put all of this on display, as many Twitter users acknowledged sheepishly last night after a large quake shook the Central Pacific coast and much of the rest of the country.

Even as the country caught its collective breath, mourned two deaths, and relived many  earthquake traumas that are certainly no laughing matter, many turned to humor as a form of release. From the #Cementazo to Johnny Depp to one TV reporter’s unfortunately chosen sweater, no one was immune.

Here are a few more sights from around Twitter last night and this morning. Videos include some ripe language not appropriate for kiddoes.

1. “My sainted mother during the #TemblorCR.”

#TemblorCR
Yo – bueno, me iré a dormir
La tierra – pic.twitter.com/fPjWxOwkuW

3. User @keibianchini made a summary of how different people react to an earthquake, including “my mother yelling at me from downstairs,” “Facebook guy,” “Twitter girl” and navigation app Waze:

4. Brown pants figured prominently among the meme-iverse. “I’m not going to lie to you…”

5. And it’s not a real meme fest until Barack Obama turns up. Here, he’s the “after” portion of a before/after split screen labeled, “Me, during the earthquake. Me, now, with the audios and memes.” 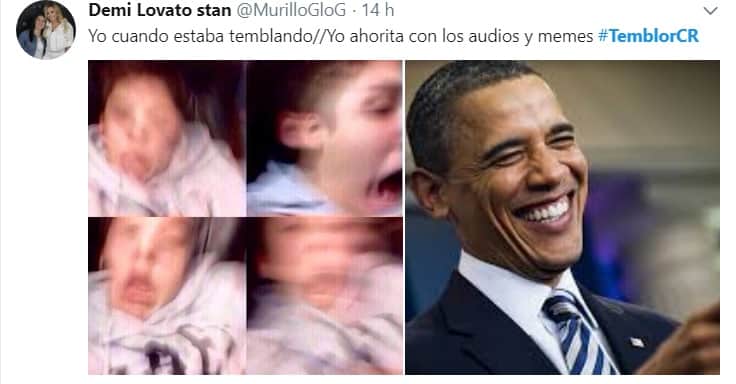 6. We’ll wrap things up with some Costa Rican earthquake humor history: no earthquake or temblor can come and go these days without someone, or more likely dozens, posting this video of U.S.-Costa Rican TV personality Jill Paer reacting to a quake during a 2009 television interview. Then as now, a chance to poke fun at others, or ourselves, after a true scare, are an integral part of the Costa Rican temblor experience.