‘La Platina’ bridge to be partially closed for over a month, officials say 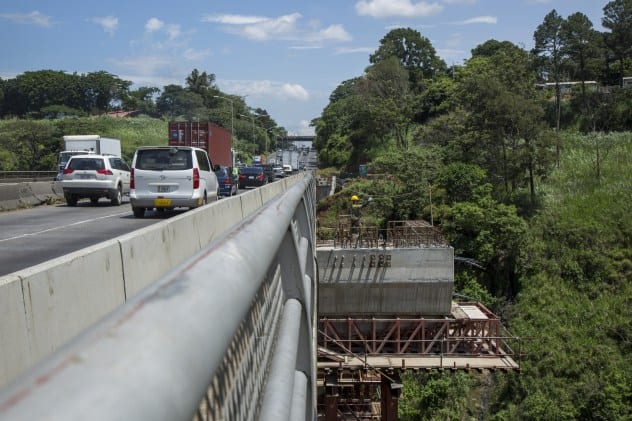 After an earlier announcement that "La Platina" bridge would only be closed for 24 hours, the government is now saying it will take six weeks to reopen the problematic bridge. ((Courtesy of Casa Presidencial))

The bridge that keeps causing nightmares for Costa Rican drivers will be closed for six weeks beginning on Jan. 21, authorities from the Public Works and Transport Ministry (MOPT) confirmed Thursday. The long closure on “La Platina” bridge on General Cañas Highway will affect the lanes going to San José from Alajuela and Juan Santamaría Airport.

Road officials said the bridge needs to be shut down during that time so that they can replace the gratings under the road and add a new layer of cement to the roadway in preparation for a third lane.

MOPT closed the same southeast-bound lanes Thursday morning for a 24-hour period on the problematic bridge over the Virilla River that the government has unsuccessfully tried to repair for the past decade.

The main detour route cuts through Lagunilla, Heredia. As of Thursday morning’s closure, the road has faced heavy traffic, according to the direction app Waze.

Government officials are expected to announce the details of the closure at a Friday press conference.