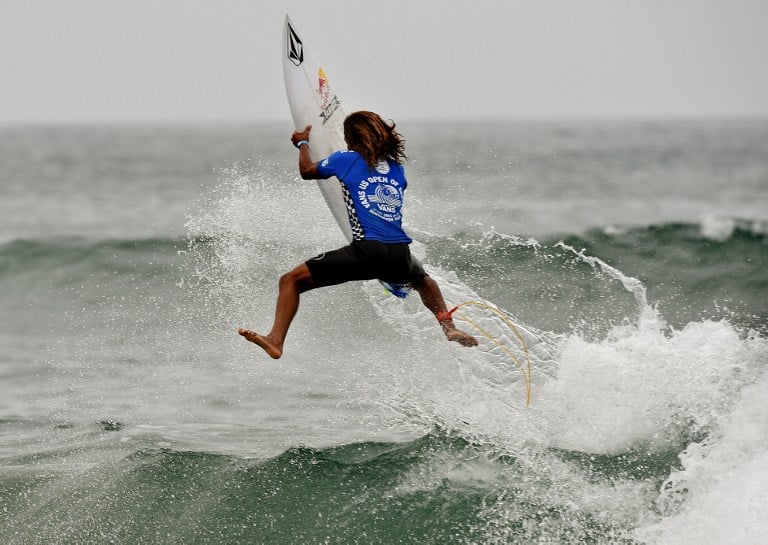 Carlos Muñoz of Costa Rica gets some air before finishing second in his round 4 heat during the U.S. Open of Surfing in Huntington Beach, California on July 31, 2015. (Mark Ralston/AFP)

To the layman, the International Surfing Association (ISA)’s upcoming 2016 World Surfing Games in Jacó might simply be a great display of surfing by athletes from around the globe. But, those athletes are competing to win, and in large part, a panel of judges will decide who’s the best.

The competition gets underway this Sunday, Aug. 7 and ends Aug. 14.

Four medals — gold, silver, bronze and copper — will be awarded in the individual men and women’s categories as well as for national teams. Each participating country’s team is made up of four men and two women. Surfers will accumulate points individually, with the team awards going to those with the highest aggregate score among all teammates.

The ISA World Surfing Games, and all ISA events, are double elimination rounds. There are primary heats in each category, and the first and second place winners automatically continue to the next round while the third and fourth place surfers move over to the repechage heats, where they have a second chance to get back into the finals. In repechage, the first and second place winners move on to the finals.

Heats will last between 20 and 30 minutes, depending on the waves. The length will be decided by the contest director after consultation with the head judge.

The ISA has specific judging criteria for all of its events:

“The surfer must perform radical controlled manoeuvres in the critical sections of a wave with speed, power and flow. Innovative/Progressive surfing as well as the Combination and Variety of Repertoire (of MAJOR maneuvers) will also be taken into consideration when rewarding points for a surfer’s performance. The surfer who performs to the criteria above, exhibiting the maximum Degree of Difficulty and Commitment on the waves shall maximize his/her scoring potential.” (Underlining and bolding is from the ISA rulebook.)

The two primary types of surfing in this contest will be aerial and power. Airs are judged and considered successful when the maneuver is landed and the surfer can ride it out with forward momentum. Otherwise, the surfer will perform controlled maneuvers “in the critical sections of a wave, with speed, rhythm and flow,” according to the official regulations.

The judges must determine points based on the following criteria:

There are five judges who individually score each ride. The highest and lowest scores given are thrown out and the remaining three scores are averaged to give the final score for the wave. Adding up the scores from a surfer’s best two waves gives the surfer her final score for the heat.

A priority system for catching waves kicks in once the first surfer in a heat catches a wave. Colored discs or flags held up on shore indicate which surfer has priority for a wave.

Competitors and beach spectators will be able to follow each surfer’s progress thanks to an electronic scoring system that rapidly averages out the judges’ scores. The contest announcer lets the surfers in the water and the beachgoers know the wave’s score.

This helps the surfer with his/her strategy. Also, getting the score live adds to the excitement.

The World Surfing Games in Jacó will be a two podium event, meaning there will be two competition areas with separate judges’ podiums. The two head judges, from South Africa and Brazil, will join a selection of international judges culled from the countries who ranked first, second and third in the 2015 ISA World Surf Championships: Costa Rica, Portugal and the United States.

Australia, Peru, France and Hawaii also have representation. In addition, there are appointed judges with no national affiliation. The Technical Committee’s selection of these important people is based on a judge’s ISA event experience, accreditation level, professional experience judging surfing competitions and their internal ISA rating.

Representing Costa Rica on the judges’ platform will be Gustavo Corrales. Jacó will be his sixth ISA event. Corrales has been a judge for 10 years, starting on Costa Rica’s National Circuit and getting his ISA certification in 2008.

Lest one think a Costa Rican judge on the podium would lean favorably towards the Ticos, Corrales said it’s “totally the opposite. I judge harder and do my job as a professional.”

Competitors can be penalized for a variety of infractions. Interfering with a surfer who has priority or the inside position while paddling to catch a wave is an interference penalty. If three out of the five judges call it, then the wave counts as a 0. This and other types of interferences carry additional point penalties for a surfer’s final score.

Now that you’ve studied up, head to Jacó to cheer on the Ticos (or whichever your favorite team is).

Read all of The Tico Times’ coverage of the World Surfing Games 2016 here.