Honduras to charge Syrians using false documents to get to US 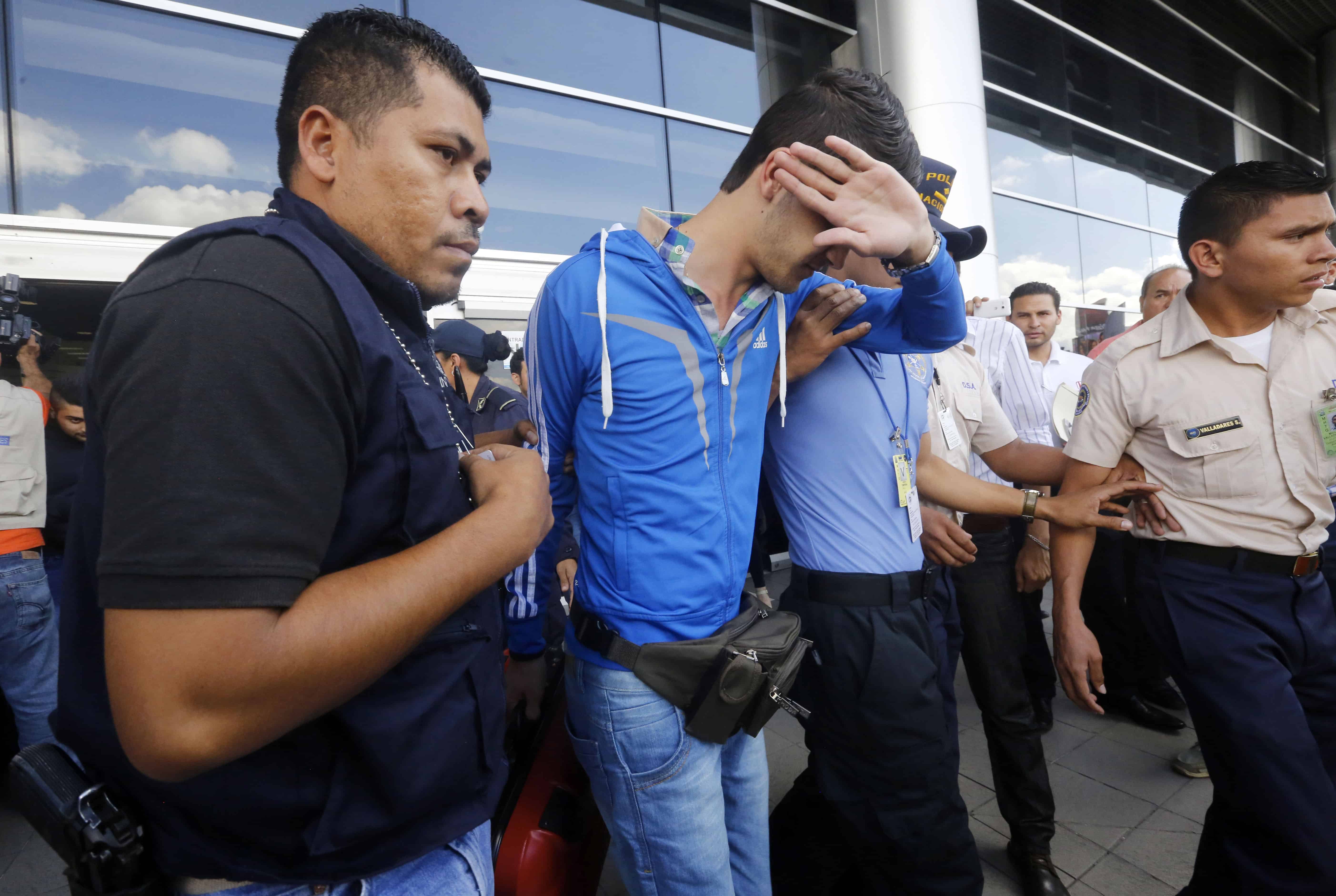 Honduran police escort one of five Syrian citizens arrested at the Tocontín International Airport in Tegucigalpa, on Nov. 18, 2015. (AFP)

Their arrests in the Central American countries reflected a sense of alarm over undocumented Syrians attempting to enter the U.S. in the wake of last week’s massacres in Paris by Syria-linked jihadists.

However, Honduran and Costa Rican authorities said there was no sign the five men or the woman had any ties to the Islamic State group or other extremist organizations. Instead they are being treated as undocumented immigrants.

The men arrested Tuesday in Honduras after flying in on stolen Greek passports “will be charged with falsifying public documents and usurping the identity of the passport owners,” Public Ministry spokesman Yuri Mora told AFP. If convicted, the men risk up to nine years in prison.

Mora said the men presented themselves as four university students and one professor and gave Greek-sounding names. They initially told police they wanted to go to the United States, using an overland route followed by many Latin American migrants through Guatemala and Mexico. Later they said they only wanted to go to Guatemala, Mora said.

In Costa Rica, the deputy chief of the police force, Nils Ching, spoke on national television about the arrested Syrian woman, saying: “There is no indication she has any ties to terrorist groups.”

The unidentified woman was detained in a small hotel in the center of Costa Rica’s capital San Jose after a tip-off by the hotel owner.

Costa Rican Public Security Minister Gustavo Mata told Radio Monumental that Interpol and the national police were working to determine whether the passport was fake or stolen, and where the woman was headed.

In the case of the Syrian men, they told Honduran authorities they had flown from Syria to Lebanon, then to Turkey, Brazil, Argentina, Costa Rica and on to Honduras.

The issue of Syrian migrants has become a domestic political struggle in the United States. Opposition Republican lawmakers are trying to block plans by President Barack Obama to resettle some Syrian refugees in America.

The U.S. House of Representatives voted Thursday to ban Syrian and Iraqi refugees from entering the United States until tougher screening measures are in place. The bill now heads to the Senate, where its fate is uncertain, but it sets up a clash with President Barack Obama, who has threatened to veto the bill and has criticized Republicans for “hysteria” and falling short of their humanitarian duty to take in the oppressed.

Officials in several countries are focusing attention on the flow of Syrian migrants through Greece after one of the gunmen in the Paris attacks was found to be carrying a Syrian passport used to transit through that EU state. Authorities have not confirmed that he was the man in the document, leaving open the possibility that it was forged or stolen.

The exodus of Syrian refugees wanting to get to Europe has created a bourgeoning market in fake and stolen identity papers.

A European security expert, speaking to AFP on condition of anonymity, said Greek police find up to 200 fake IDs a day at Athens airport and dismantle ID forgery factories at least once a month in the city.