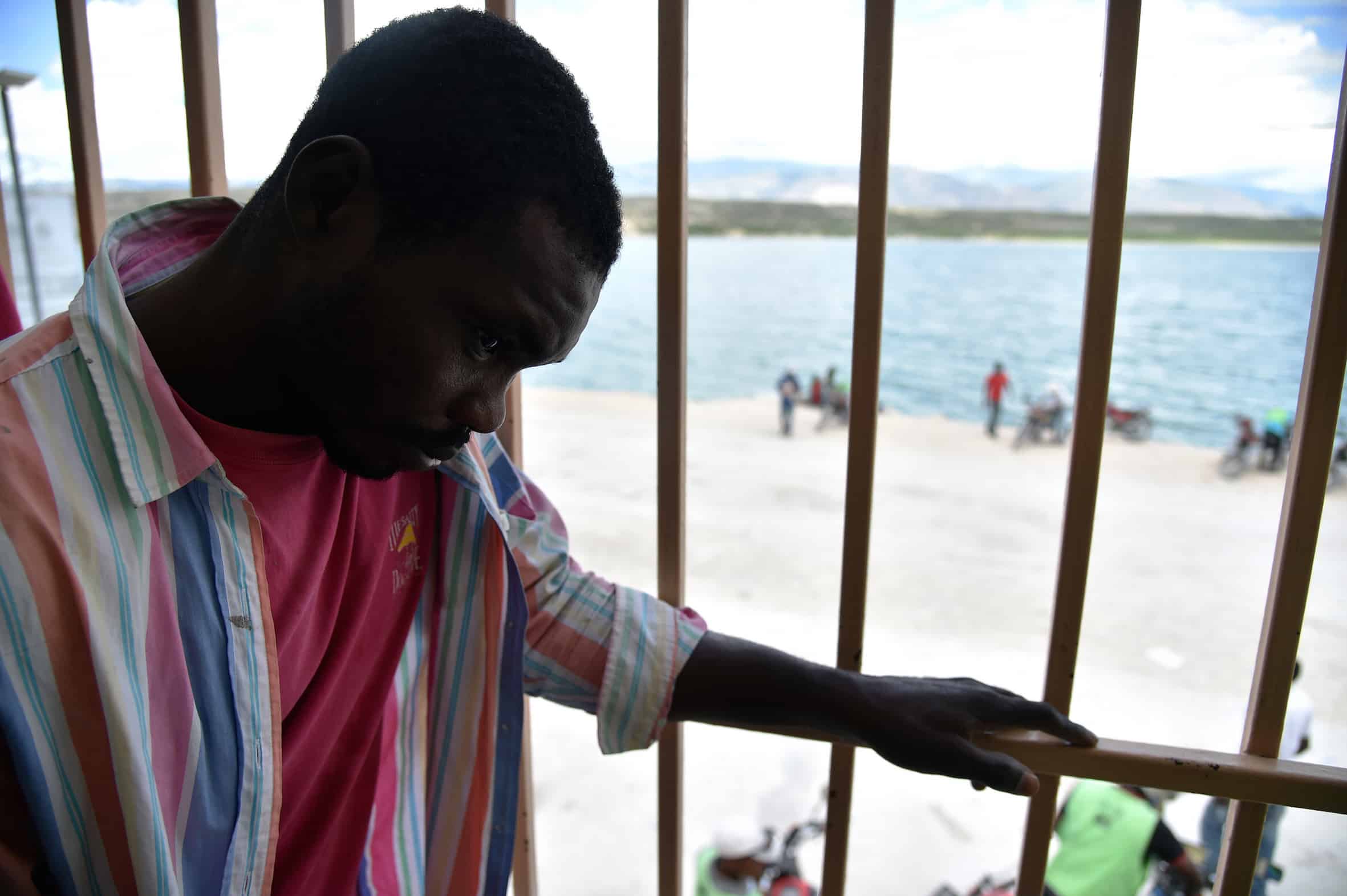 Elicien Louimene, 33, arrives in Malpasse on Oct. 27, 2015 after being deported by Dominican migration authorities. Dominican authorities settled on a deadline of June 17 for foreigners who had no residency papers to legalize their status and for Dominicans born to Haitian parents to receive their identification documents or face deportation as part of the National Reorganization Plan for Foreigners. (Hector Retamal/AFP)

MALPASSE, Haiti — Talk about a sad homecoming. Jules Mismac, a Haitian living in the neighboring Dominican Republic, was arrested under a tough new immigration policy, then left at the border to start life over from scratch.

Awaiting him was a country he does not know, with virtually nothing to his name: the clothes on his back and a Bible in his hand. He was arrested in the street while speaking with a preacher.

Human rights groups are feverishly documenting the accounts of the many people like Mismac, caught up under the new Dominican law in sometimes arbitrary arrests since it took effect in June.

It stems from a 2013 court ruling that said people born in the Dominican Republic of parents without legal residency are no longer considered Dominican. Most are of Haitian origin.

Unfolding is a nasty fight between two of the poorest countries in the Americas. They share the island of Hispaniola in the Caribbean.

For many Haitians, the treatment amounts to racism against black people by Dominicans, most of whom are lighter skinned and of mixed heritage.

Overnight, more than 250,000 people — mostly those born of Haitian parents — became stateless under the court ruling.

In response to an international outcry Santo Domingo established a process by which some 50,000 of those immigrants would be allowed to stay. But the majority were unable to finish the process in time for a June 17 deadline.

Documents that were slow to arrive from Haiti and Dominican registration offices were overwhelmed by crowds.

So Haitians are being deported.

Mismac said he was arrested while speaking to a pastor outside the latter’s home. He had gone there to talk about a sick parishioner.

“The immigration people came by and picked me up,” Mismac, 41, said on a hot sunny morning last month at the Haitian border crossing.

A yellow bus had just dropped him off with 34 others who were being kicked out of the Dominican Republic.

“The pastor wanted to give me some money but they would not let him, and they took me away,” Mismac said.

Dominican soldiers and Haitian police looked on as Mismac and the others boarded small vans for the short ride across the border into Haitian territory.

At an immigration processing office, Haitian clerks fill out forms for the new arrivals, who receive a paper from the International Organization for Migration stating they have in fact registered their entry.

On the sidelines of all this, Red Cross and Haitian aid organizations gather information from the people arriving, such as when they were arrested and how long they had been living in the Dominican Republic.

The data is entered onto forms prepared by the U.N. refugee agency.

No place to go

The arrivals are asked where they are going to go in Haiti. But few have an answer.

For the officers working here in Malpasse, one of four border crossings, scenes of despair are common as deportees arrive day after day.

“They arrive by the dozen with nothing in their pockets,” said one immigration official who spoke on condition of anonymity. “It is just not right.”

Another man arriving, Luc Blanco, 23, said he was arrested arbitrarily by the Dominican military.

Speaking Haitian Creole mixed with Spanish, Blanco said he was arrested outside his home.

“I told them I wanted to get my things from my house, but they did not give me time,” he said.

Blanco was born in a shantytown housing people who work the sugarcane fields in the Dominican Republic.

His mistake is that he never registered with the Dominican authorities.

“My mother died when I was little and I never knew my father,” he said.

Blanco lived with his half sister and half brother. He said they had papers because they had a different father than he did.

The crisis marks yet another chapter in often troubled relations between Haiti and the Dominican Republic. But this one is too much, say Haitian civil society organizations.

“Many people leave behind their children, their spouses. I consider that a crime against humanity,” said Pierre Garot Nere, coordinator of an umbrella grouping of organizations trying to help the deportees.

He said racism and xenophobia in the Dominican Republic are to blame, along with the international community’s failure to intervene.

“It is unacceptable to see this crime against humanity and do nothing,” Garot Nere.