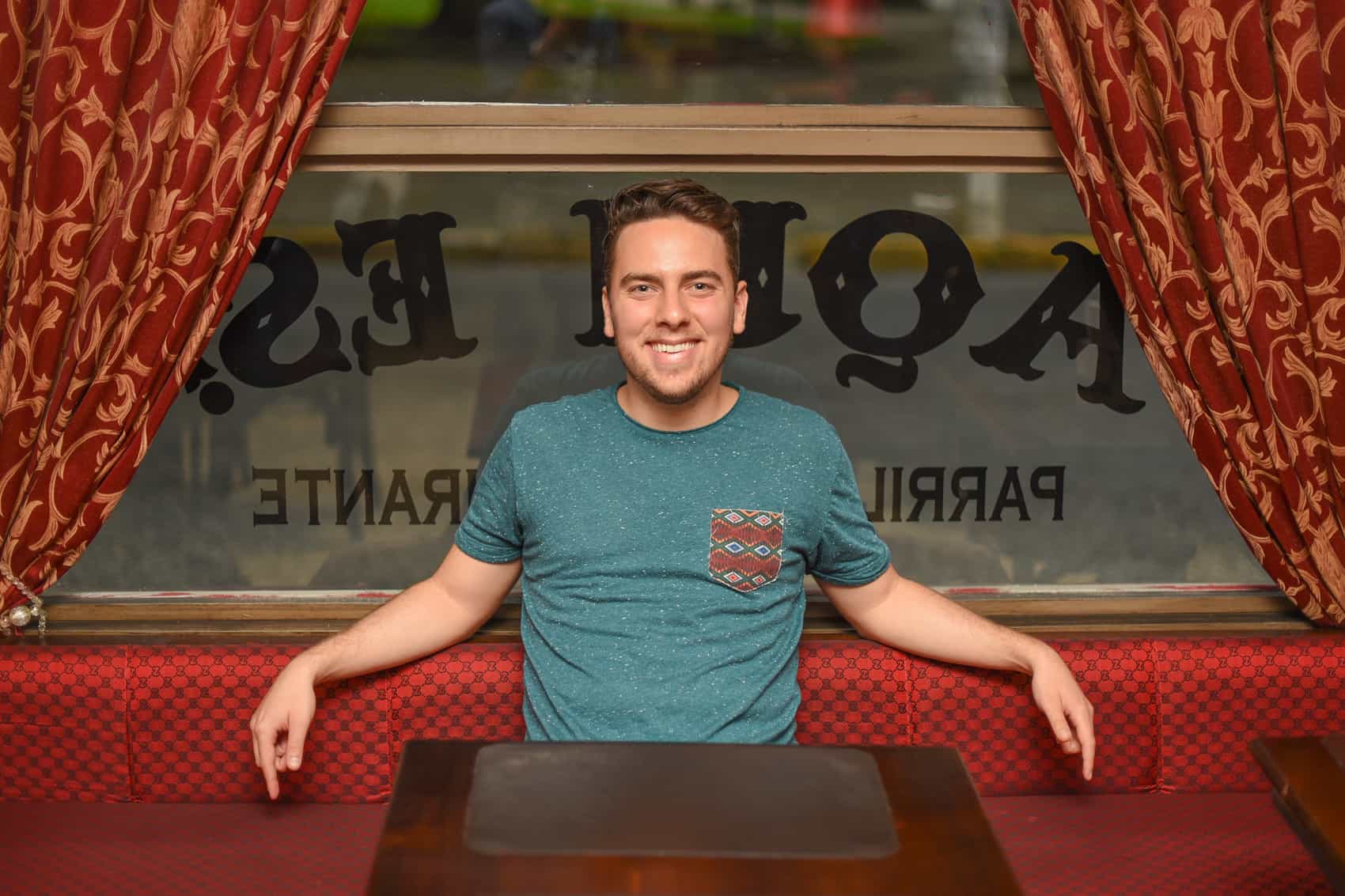 André Robert is ready to take on the world. (Alberto Font/The Tico Times)

André Robert’s career has just begun, but what it lacks in years, it makes up for in ambition. In just a year and half, the Costa Rican filmmaker has already made two short films – the first of which, “Zafiro,” will be featured at the Shnit Festival here in Costa Rica in October, and later at the PNR Film Festival in Madrid – and is preparing to produce his first feature. In addition, Robert is working in advertising at the Tribu Agency, and as a freelance producer of television commercials. Asked to name the producers and directors that influence him, he goes straight to the top: Lars Von Trier, David Fincher, Alexander Payne, Terrence Malick, the Coen brothers, and Michael Haneke.

The Tico Times met up with Robert for some Argentine empanadas at a restaurant on Paseo Colón in San José, where he talked film, tragedy and big dreams. Excerpts follow.

Why did you become a filmmaker?

I didn’t know that I wanted to be a filmmaker. When I finished high school I studied French at the University of Costa Rica, but I wasn’t comfortable. I didn’t like it, and I have always had an inclination for arts. When I was a child my cousin and I used make videos. We filmed Legos or even ourselves, “acting,” and in high school we loved to do video projects whenever possible. So, that is where this love about telling stories through camera began.

Actually, at first I wanted to be an actor, so I went to a workshop in Los Angeles and I found out that I suck at acting. So, I started looking for more options and, I had the opportunity to study production at Loyola Marymount University. I went to Germany to make a documental about a Cuban girl who went to Germany to study, but ended up being exiled from Cuba, so she couldn’t get back to her country or see her children. She could talk to them once a month, just for a couple of minutes. She let me be part of it, and tell her story. By that time, I spoke English, but I was in a country where German is spoken, so I noticed that the best way to communicate was through the camera.

What do film production and direction mean to you?

As time goes on and I produce more stuff, I feel more identified with it. It is a way of self-treatment. Some people go to the psychologist, I do production. Well, I also go to the psychologist [laughs], but film is a tool to explore myself. It lets me see things about myself, from a certain distance, and I like that. Filming has been a tool for catharsis, to deal with stuff. And it is really gratifying, because at first I saw myself all alone and devastated, but then people come and get interested in your work and get involved in it.

If something is bothering me and I need to get it out, that will be the inspiration of that moment. I think that perhaps one day I’ll see my life through my movies.

Tell us about “Zafiro,” your first short film.

When I was in my last year of university and writing my thesis, I got the news that my father had brain cancer, so I had to pause my studies. I came back to Costa Rica to be with him. During that process, I wrote the script of “Zafiro” (“Sapphire”). Sadly, my dad passed away and I had to return to the States to finish my studies. That was a quite difficult time; I was all alone with the sadness of what had just happened. I needed to do something and stay busy. I thought I could finish writing “Zafiro” and use that as my thesis. I came back to Costa Rica last year to film it, edited it in the States, and returned to Costa Rica in January to finish the music.

The most difficult part was to see how it was constantly changing. Sometimes it was out of my control. For example, at first it was a comedy, and during the filming process it changed into a drama. That has been my grief: to let go of the movie, and my dad as well, because we had a really close relationship.

Why did you want to make “Zafiro” in Costa Rica?

“Zafiro” was filmed at Cuajiniquil Beach [in Guanacaste], a really beautiful place. Not many people know it, but my family used to have a house there starting about 50 years ago, a little wooden house. That was the place where my dad was raised, and where I was raised too. From the very moment I started writing the script, I knew that was where I wanted to film it. I went with a crew of 25 people to the beach for 11 days to film it. It was a really cool experience, really tuanis, because I was able to express something through the cameras that was all my own. To be there was so emotional for me.

Tell us about your future projects.

As I was finishing “Zafiro” I wrote the script for another short film, “Martes, 8:30″(“Tuesday, 8:30”). It is a psychological thriller about a girl who, during a psychoanalysis session, explores her fantasies with an older man. We filmed it in August, and right now I’m in the editing process, preparing to send it to festivals.

“Los Wildkatzen” will be my first [full-length] film. I’m writing the script with my cousins, who I usually work with. We already have the step outline and characters, but before we continue I want to be done with “Zafiro” and “Martes, 8:30.” I think I’m hungry to make movies, but I have to slow things down and do it calmly. So, the movie will maybe wait for next year and perhaps be filmed in 2017, because also I want to look for economic support.

The movie will be a satirical comedy. I want to express why people grow their egos, and other people feed their egos. How it changes your life and can make you live a life that is not yours. It’s about a billionaire family who say they are really close,  but what really keep them together is the money. The main character wants to make his first movie and become famous, but things will get rough. Also, we will touch on the topic of homosexuality, which hasn’t been explored here in the country [on film]. When you have self-acceptance, everything gets better.

My future aspirations? Honestly, to have the possibility to produce the films I want to, to be able to live off of it. There are a lot of actors I’d love to work with, photography production, working with different sorts of cameras. There’s a lot I’d love to do. If I become a dreamer and feed my own ego, I’d say that one of my aspirations is to see one of my movies at the Cannes Film Festival. I’m just beginning my career, but I know that if you don’t believe it, no one is gonna believe it. Of course, you have to be humble and to know why you are telling the story.

Our “Weekend Arts Spotlight” presents Sunday interviews with artists who are from, working in, or inspired by Costa Rica, ranging from writers and actors to dancers and musicians. Do you know of an artist we should consider, whether a long-time favorite or an up-and-comer? Email us at [email protected].