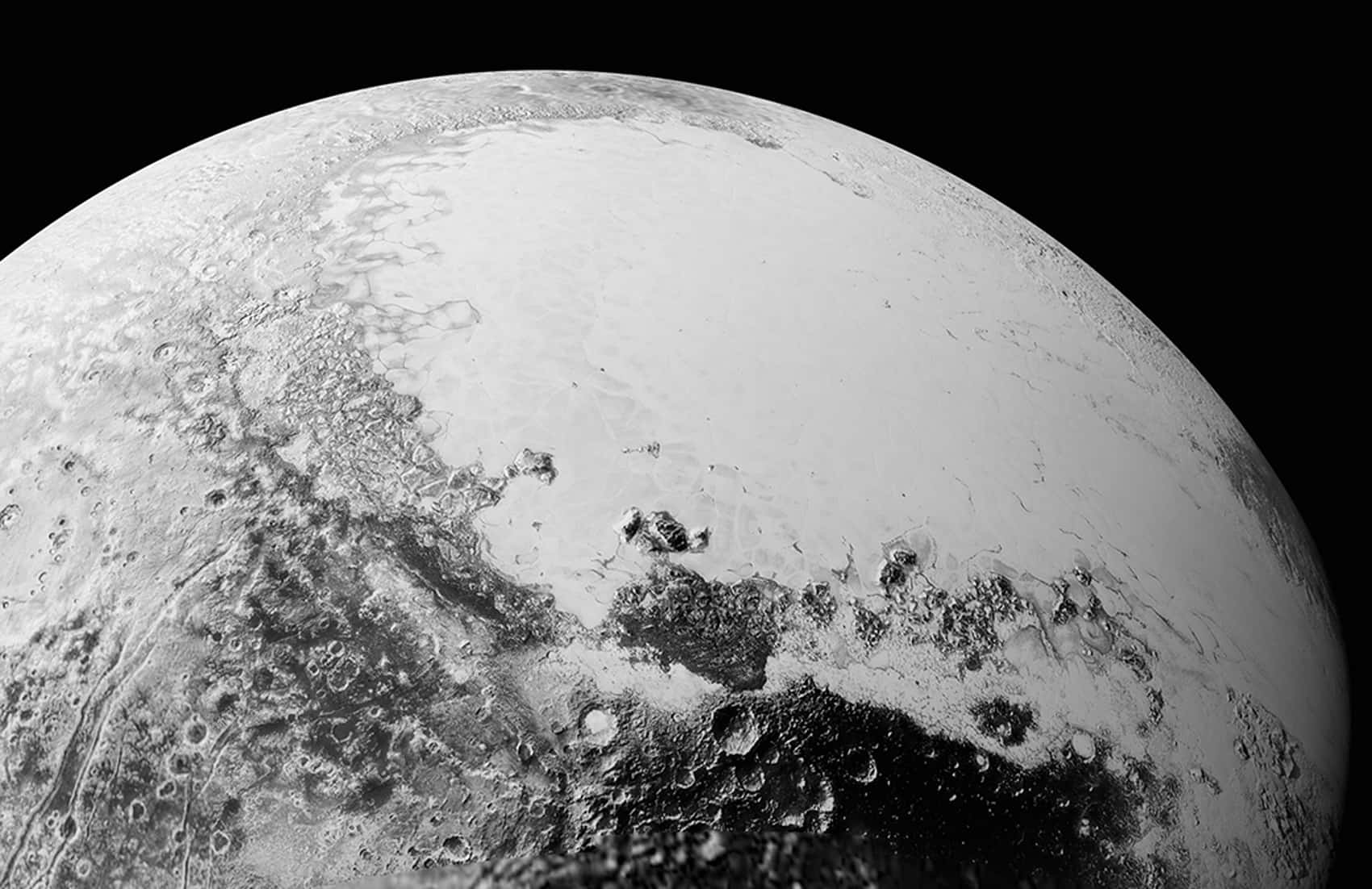 According to NASA, this synthetic perspective view of Pluto, based on the latest high-resolution images to be downlinked from NASA's New Horizons spacecraft, shows what you would see if you were approximately 1,100 miles (1,800 kilometers) above Pluto's equatorial area, looking northeast over the dark, cratered, informally named Cthulhu Regio toward the bright, smooth, expanse of icy plains informally called Sputnik Planum. The entire expanse of terrain seen in this image is 1,100 miles (1,800 kilometers) across. The images were taken as New Horizons flew past Pluto on July 14, 2015, from a distance of 50,000 miles (80,000 kilometers). (NASA/Johns Hopkins University Applied Physics Laboratory/Southwest Research Institute)

“Pluto is showing us a diversity of landforms and complexity of processes that rival anything we’ve seen in the solar system,” said Alan Stern, principal investigator with the Southwest Research Institute in Boulder, Colorado, who is playing a key role analyzing data sent by the probe.

“If an artist had painted this Pluto before our flyby, I probably would have called it over the top – but that’s what is actually there,” he said. According to NASA, in the center of this 300-mile (470-kilometer) wide image of Pluto from NASA's New Horizons spacecraft is a large region of jumbled, broken terrain on the northwestern edge of the vast, icy plain informally called Sputnik Planum, to the right. The smallest visible features are 0.5 miles (0.8 kilometers) in size. NASA/Johns Hopkins University Applied Physics Laboratory/Southwest Research Institute

Long considered the farthest planet from the Sun before it was reclassified as a dwarf planet in 2006, Pluto has never before been explored. In July, New Horizons – a nuclear powered spacecraft about the size of a baby grand piano – became the first spaceship to pass by Pluto.

By doing so, the unmanned probe has for the first time given scientists the chance to obtain close-up images from the distant and complex dwarf planet. The stunning pictures, displaying chaotically jumbled mountains and other dramatic geographical features, is somewhat reminiscent of the helter-skelter terrain of Jupiter’s icy moon Europa, NASA scientists said.

New Horizon began a yearlong download of new images and other data several days ago. The pictures downloaded this past week have more than doubled the amount of Pluto’s surface seen, at resolutions of about 400 meters (440 yards) per pixel.

NASA said New Horizons will continue to send data back to Earth until late next year. The space agency also said that next week, the probe will beam images of Pluto’s moons Charon, Nix, and Hydra.