Gimelfarb had traveled to Costa Rica alone for a brief vacation before he was to return to his doctoral studies in psychology in Chicago. On the morning of Aug. 11, 2009, David left his passport and other possessions in his Guanacaste hotel, drove a rental car to the national park, signed the park’s logbook and vanished.

The initial search for him lasted three weeks across 14,000 hectares of jungle in the park. Despite help from the Red Cross, National Police and foreign volunteers and an inquiry by the Judicial Investigation Police (OIJ), Gimelfarb was never found. Weeks turned into years. The investigation tapered off and Gimelfarb’s disappearance hardened into a cold case. But his parents, Roma and Luda Gimelfarb, have never given up the search for their son.

The family, convinced that David is still alive, has traveled to Costa Rica every year since their son’s disappearance to look for him, offering a $100,000 reward for information leading to his safe return. Last year the Gimelfarbs focused their search on Costa Rica’s border area with Nicaragua, handing out flyers with David’s face. The Gimelfarbs have delayed their search this year, they told The Tico Times, citing the poor health of Roma, David’s father. They plan to return later this year.

The OIJ did not reply Monday to a request from The Tico Times for an update on the case. 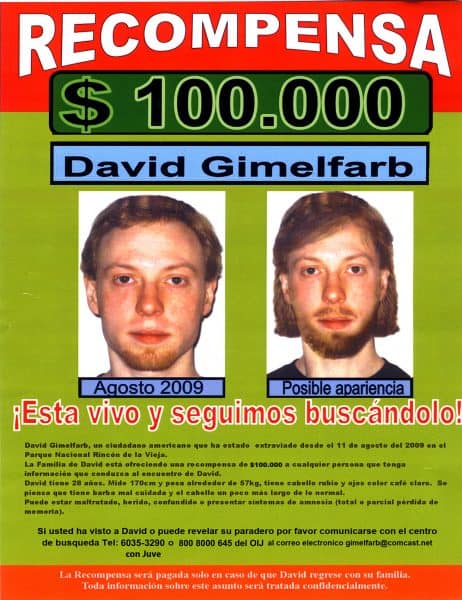 In Brazil, a 290-million-year-old forest is discovered