One American hunts for emeralds in Colombia. But many want to stop him 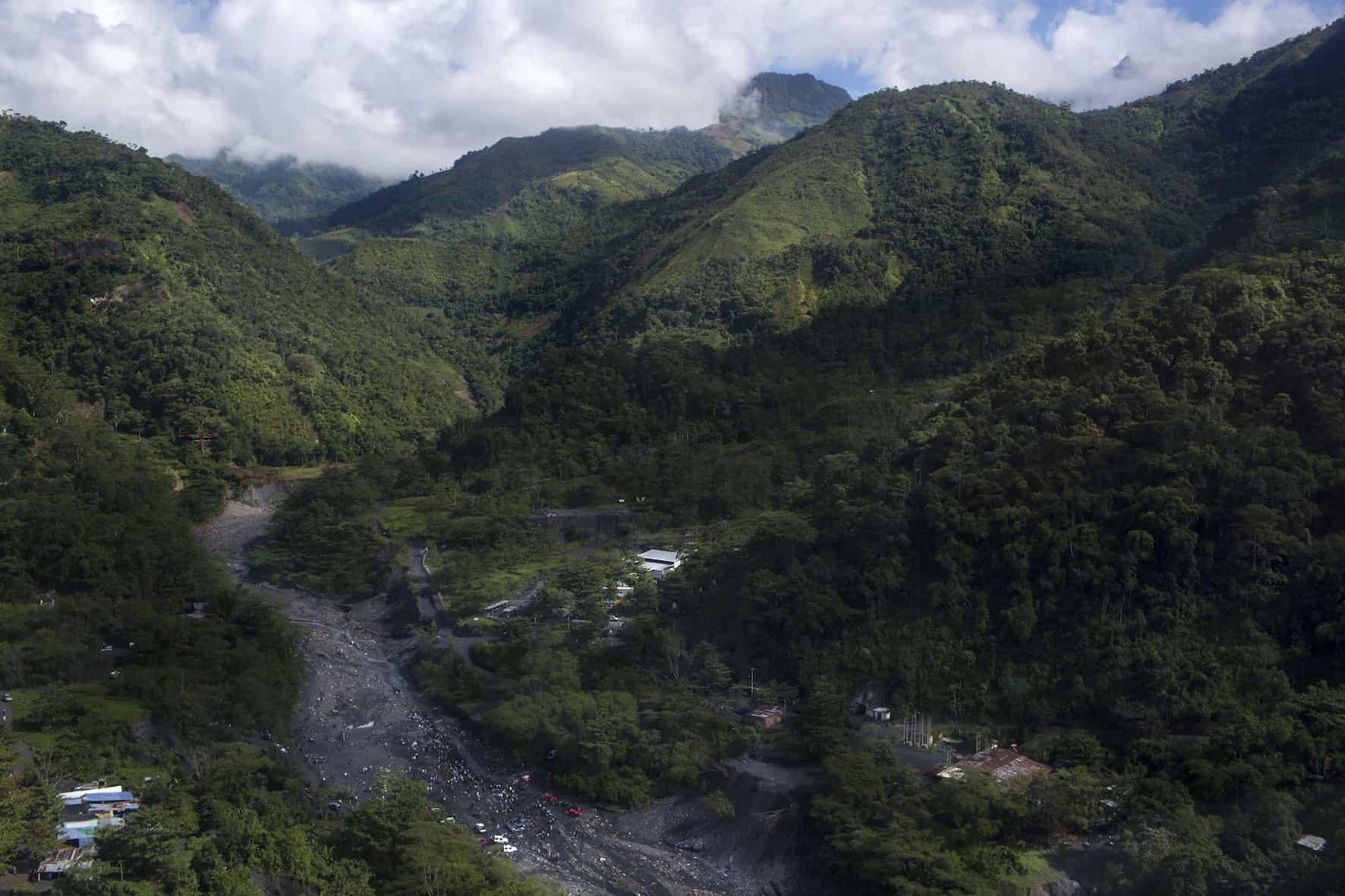 This part of Muzo, Colombia, shown on July 24, 2015 is where Minería Texas Colombia, a U.S. emerald mining company, owns the rights to the subsurface. The company purchased the mine from emerald czar Victor Carraza in 2013. (Dania Maxwell/The Washington Post)

MUZO, Colombia — The chopper touched down on the hillside helipad and Charles Burgess, a cigar-chomping former U.S. government employee, stepped out to survey the full sweep of his Andean domain.

Since before the conquistadors, men have dug for emeralds in the soil of this steep-walled jungle valley. The gemstone bounty found here fueled the empire of Victor Carranza, the feared billionaire “emerald czar” who vanquished his rivals in bloody battles that left some 6,000 dead. Now all that Burgess could see — from the green peaks where the vultures circled to the valley floor where grimy campesinos shoveled dirt in the black river — belongs to his American mining company, which has taken control of the world’s largest and most valuable emerald mine.

By purchasing Carranza’s share of the mine two years ago, the Houston-based company, Minería Texas Colombia, known as MTC, is now the only foreign mining company in the treacherous world of Colombia’s emerald trade — once responsible for about two-thirds of the world supply. As the Americans try to reverse declining gemstone production, they also intend to revamp a feudal system of peasants and patrons by paying salaries and benefits and using modern machinery. In that way, the company’s goals mirror those of the country, whose half-century conflict with leftist rebels is nearing a negotiated peace.

But as MTC has bucked local customs, and without Carranza to protect them, some residents and rivals have begun to revolt. On two occasions, armed villagers have seized the company’s mine shafts. Riot police and soldiers fought to control the crowds, but four people have died in the disturbances. Burgess has received threats that his enemies will seize his barbed-wire encampment, blow it up and make off with the emerald vault.

“It’s tough being the only foreigner out here,” he said. Emerald mine laborer José Vicente Ico, center, drops a rock while digging through mined rubble outside the Minería Texas Colombia plant in Muzo, Colombia, on July 26, 2015. Apart from the rare chance that they strike big, informal emerald miners usually make between $35 to $70 dollars a month. Dania Maxwell/The Washington Post

As the helicopter flies, Muzo is a short 60-mile hop north of Bogotá, but by road it seems to lead back in time, a seven-hour bumping journey along cliffside switchbacks into a lost green world. The region is rich in coal and iron, but it is world famous for its emeralds, considered the highest quality on Earth. From open pits and dank shafts, miners have pulled out stones so precious that they have names, such as Fura, at 15,000 carats one of the world’s biggest, named for a mythical unfaithful king whose wife’s tears turned to emeralds. A smaller but brighter gem named after the wife, Tena, is one of the most valuable and was once owned by the Russian empress Catherine the Great.

Around Muzo, people speak of the stones in superstitious ways.

“An emerald is an enigma. She’s a very jealous rock,” said Efraín Sánchez, a 63-year-old miner who has been searching for them for four decades. “To find her, you have to have enormous faith.”

In Colombia’s recent history, Carranza was the leader of the faithful. A child miner from an impoverished family, he rose to control nearly half of Colombia’s emerald business and become one of its largest landowners and wealthiest men. Carranza fought off Medellin drug traffickers who wanted to use the emerald mines to launder drug profits and used his private army of some 2,000 people to attack leftist guerrillas. He survived at least two assassination attempts as he consolidated power.

During the bloodiest years of the 1980s, known as the “Green War,” feuds between families grew into wars between villages. Accusations of killings and kidnappings mounted, as well as suspicions that Carranza was running his own drug operation. State Department cables and reports referred to him as a “big-time narco” who was “involved in illegal financial activity.” Arrested in 1998 for forming right-wing death squads, Carranza spent three years in jail, but the charges were eventually dropped and he was freed.

“You couldn’t stand in this spot during the war,” said Sánchez, as he shoveled in the riverbed under the MTC mine. “I carried two pistols in my belt. Everywhere there were drug traffickers, spies for the army. They’d kill anyone just on suspicion. It was everyone against everyone.”

In that environment, Carranza was both protector and frightening overlord. His hilltop estate, across the valley from MTC’s headquarters, has tennis courts, a Turkish bath and a giant emerald safe. He had many enemies — his cook would test his favorite breakfast rib soup for poison — but even more supplicants. Next to his helipad was a low stone bench known as the “Wall of Laments,” where he would sit to hear the entreaties of his subjects.

“He was the irreplaceable man,” said Wilson Murcia, a mining engineer who worked for Carranza. “When he was alive, you wouldn’t have the type of problems like you have today in the region. Who could say no to Victor Carranza?” “I knew Carranza quite well,” Burgess said from the back seat of his McDonnell Douglas helicopter, flying toward the mine.

Burgess had spent his career in U.S. embassies in Latin America in the 1980s and ’90s, with stints in Mexico and Colombia as well as at the U.S. interests section in Cuba, before retiring in 2009. The archbishop who officiated at his wedding to a Colombian woman happened to be the same one who negotiated the 1990 peace agreement that ended Carranza’s Green War and introduced him to people in the emerald business. By the time Burgess met him, Carranza was worried about flagging emerald production. With little investment and surface emeralds getting harder to find, Colombia’s production had dropped from a world-leading 9 million carats in 2004 to 2.6 million a decade later, losing ground to Zambia and Brazil. Carranza was looking for foreign investment to modernize the industry.

“He realized the old way of doing things had to change,” Burgess said.

Burgess had no mining experience. But he passed Carranza’s message on to private-equity people he knew “and then found myself, much to my surprise, helping to set up and run an emerald-mining company.” Burgess declined to name the owners or investors behind MTC, besides saying some of them were Americans. In 2009, the company started operating Carranza’s Muzo mine.

Since then, the company has sought to graft a modern corporate approach onto an outlaw industry. Miners used to work for food and whatever emeralds they could steal, but the company, which has become the state’s second-largest employer, pays its roughly 600 mine workers at least $420 a month, about twice the national minimum wage, plus health insurance and other benefits. Industrial machinery is replacing picks and shovels. The company is digging a ramp that, when finished, will spiral into the mountain for nearly two miles, down to a depth of 1,300 feet, big enough that emeralds can be driven out by four-wheelers rather than loaded into cumbersome handcarts, as in the older shafts. And in an industry where pocketing a few stones was customary, the Americans have brought stricter vigilance: Behind miners operating hydraulic jackhammers, another employee films the work to prevent theft.

“We are the pioneers in changing this and we’re pretty proud of it,” Burgess said. “We’re opening up the whole region to the outside world.”

MTC has won praise from some inside and outside the industry for its reforms.

The Americans “bring order to the mineral extraction,” said Archbishop Héctor Luis Pabón, one of the Catholic Church leaders who worked to bring peace to the region. “They will pay the miners fairly, they will take care of things, and they will educate people so their salaries are not spent only on beer.”

Under the protective shield of Carranza and his security guards, the company faced little resistance. But since 2013, when Carranza died of lung cancer and MTC purchased the mining rights, trouble for the Americans has mounted.

From one side, villagers who mine the area informally feel the company is cutting off access to what has been theirs for generations. In Carranza’s day, the mountains of dirt excavated from the mines would be dumped in the riverbed so people could pick it over for emeralds missed by the company. The practice helped keep the peace among communities who lived in the bleakest poverty, and thousands would line the river banks on dirt dumping days. But residents say MTC filters out more emeralds, leaving them fewer scraps.

“Every day they’re strangling us more,” said Inocencio Nuñez, one of a few dozen men shoveling through MTC’s castoff soil on a recent day. “They’re throwing out dirt that has no value. They wash it one, two, three times. There’s a lot for this company and nothing for the people.”

Videos of MTC trucks dumping remnants show a seething crowd of residents jostling to grab a few handfuls to sift through.

Carranza’s old enemies, including henchmen of a former Medellin drug ally of Pablo Escobar, have also taken aim at the Americans.

In September 2013, allegedly incited by these gangsters, more than 2,000 people poured over a hillside, ignoring police, and began digging dozens of tunnels on MTC land. When some of them collapsed, three people were killed and about 10 more injured.

“The other illegal miners just stepped over the dead bodies and went on digging,” Burgess said.

Burgess was sleeping at the mine after midnight on May 13 when gunmen blasted off the steel access doors of a tunnel across the valley and began firing inside at company miners on the night shift.

Forced to flee by police gunfire, the men came back in force the next night. A mob of some 2,500 people, in thrall to rumors of fresh emeralds, crowded the dirt road and forced their way into the tunnel. Burgess said one local gangster, the nephew of an extradited drug trafficker, brought 500 lunches to try to entice villagers to stay and keep digging.

MTC workers were beaten and its ambulance battered by rocks. Riot police sprayed tear gas down the tunnel to disperse the crowd. MTC exploded dynamite to collapse its own tunnel. After the blast, 15 people sneaked in through a side tunnel trying to get at the emeralds.

“The first one in was overcome by the toxic fumes from the explosives and died,” Burgess said. “We had to haul the other 14 out and give them oxygen. After this, the government issued orders to the police and army to immediately end the invasion, and this was done, fortunately, without more violence.”

“The poorer we are here,” said José Evelio, who lives near the invaded mine shaft, “the more people will force themselves into the mine.”

Other foreign companies, such as the British mining firm Gemfields, are considering following MTC’s lead and entering the Colombian emerald industry. But the American company’s experience has shown that poverty and organized crime are still daunting obstacles in this jungle treasure hunt.

“How could people be happy?” one Muzo resident asked. “They’re putting tons of emeralds on a helicopter and flying it all away.”