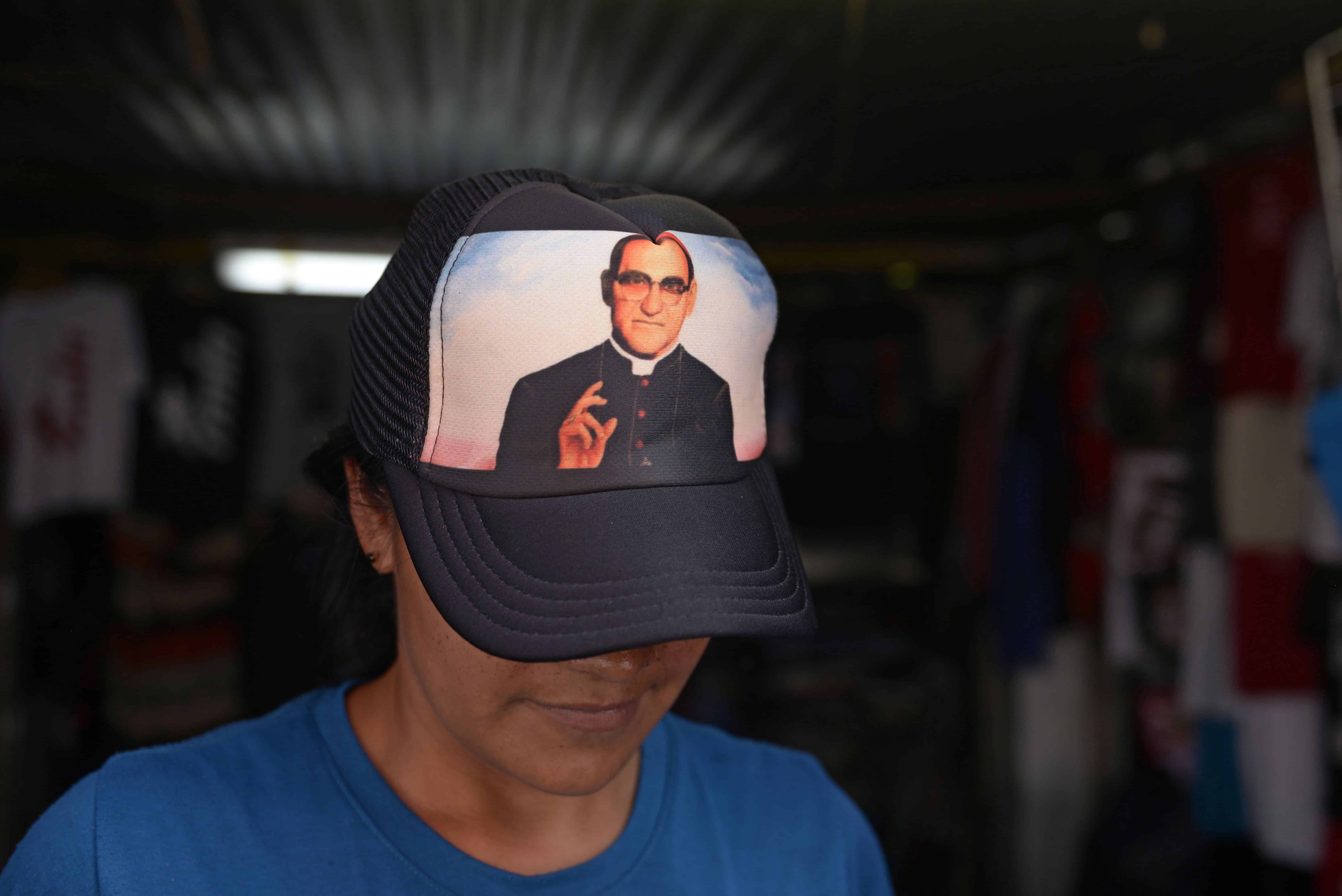 A vendor wears a cap with the portrait of Salvadoran Monsignor Oscar Romero (1917-1980) in San Salvador on May 19, 2015. Monsignor Romero will be beatified next May 23. (Marvin Recinos/AFP)

SAN SALVADOR, El Salvador — Thirty-five years after he was gunned down while delivering mass, controversial Salvadoran archbishop Oscar Romero will be beatified Saturday, held up by Pope Francis as a symbol of a Catholic Church dedicated to the poor.

In a move long resisted by conservative Catholics and the Salvadoran right, Romero will be declared “blessed” in a ceremony led by the pope’s envoy, Cardinal Angelo Amato, in San Salvador’s central plaza.

Six cardinals, more than 100 bishops and archbishops, and 285,000 faithful are expected at the ceremony, which will bring the man nicknamed the “Voice of the Voiceless” one step from sainthood.

“It will be an unforgettable day, a festival for the world,” said the auxiliary bishop of San Salvador, Gregorio Rosa Chávez. “This party is going to unite the whole world in the hope of a world where truth and the values that Monsignor Romero fought for become reality.”

An outspoken critic of social injustice, Romero was shot through the heart by a sniper while performing mass at a hospital chapel on March 24, 1980, a day after exhorting El Salvador’s soldiers to stop killing civilians.

Timeline of major events in Romero’s life and his canonization

The incidents occurred at the outset of El Salvador’s civil war, and propelled the country deeper into a brutal conflict that raged until 1992, when the rightwing government signed a peace deal with the leftist guerrillas of the Farabundo Marti National Liberation Front (FMLN).

No one was ever convicted of Romero’s killing, but a UN-sponsored truth commission concluded it was carried out by a rightwing death squad under the orders of Roberto D’Aubuisson, a former army officer who died the year the war ended.

Romero, who was born August 15, 1917 in the northeastern town of Ciudad Barrios, studied theology in Rome and was ordained there in 1942, in the midst of World War II.

He was considered a conservative cleric when he was named archbishop of San Salvador in 1977. But the following month his friend and colleague Rutilio Grande was killed in a hail of bullets with two humble farmers.

The failure to investigate the killings started Romero down a path of increasingly vocal opposition to the government, which was fighting to stamp out a growing leftwing rebellion.

His condemnation culminated in the famous homily he gave on the eve of his death, when we told rank-and-file soldiers: “I beg you, I plead with you, I order you in the name of God: stop the repression.”

His life was depicted in the 1989 film “Romero” starring Raúl Julia.

The cause to make Romero a saint officially started in 1990, launched by his colleague Rafael Urrutia.

But critics associated Romero with “liberation theology,” a movement rooted in Latin America that advocates working with the poor to bring about social change.

He did not actually adhere to the theology. But his teachings on solidarity with the poor looked dangerously leftist to some.

The petition to canonize him stalled at the Vatican’s Congregation for the Causes of Saints. It finally moved forward in February when Pope Francis, who has also sought to champion the poor, named Romero a martyr for the church, clearing the way for his beatification.

Attitudes are changing in El Salvador, too.

The former leftist guerrilla army, the FMLN, is today governing the country. The international airport and a main avenue in San Salvador have been named for Romero, and adoring Salvadorans snap up T-shirts, key-chains and mugs with his image.

In 2010, former president Mauricio Funes apologized in the name of El Salvador for Romero’s assassination and declared him “the spiritual guide of the nation.”

Romero’s tomb in the basement of San Salvador’s cathedral now draws pilgrims from around the world.

“What does the beatification mean for El Salvador and the world? It means that truth and social justice are now factors that will be present in the life of El Salvador,” President Salvador Sánchez Cerén said recently.