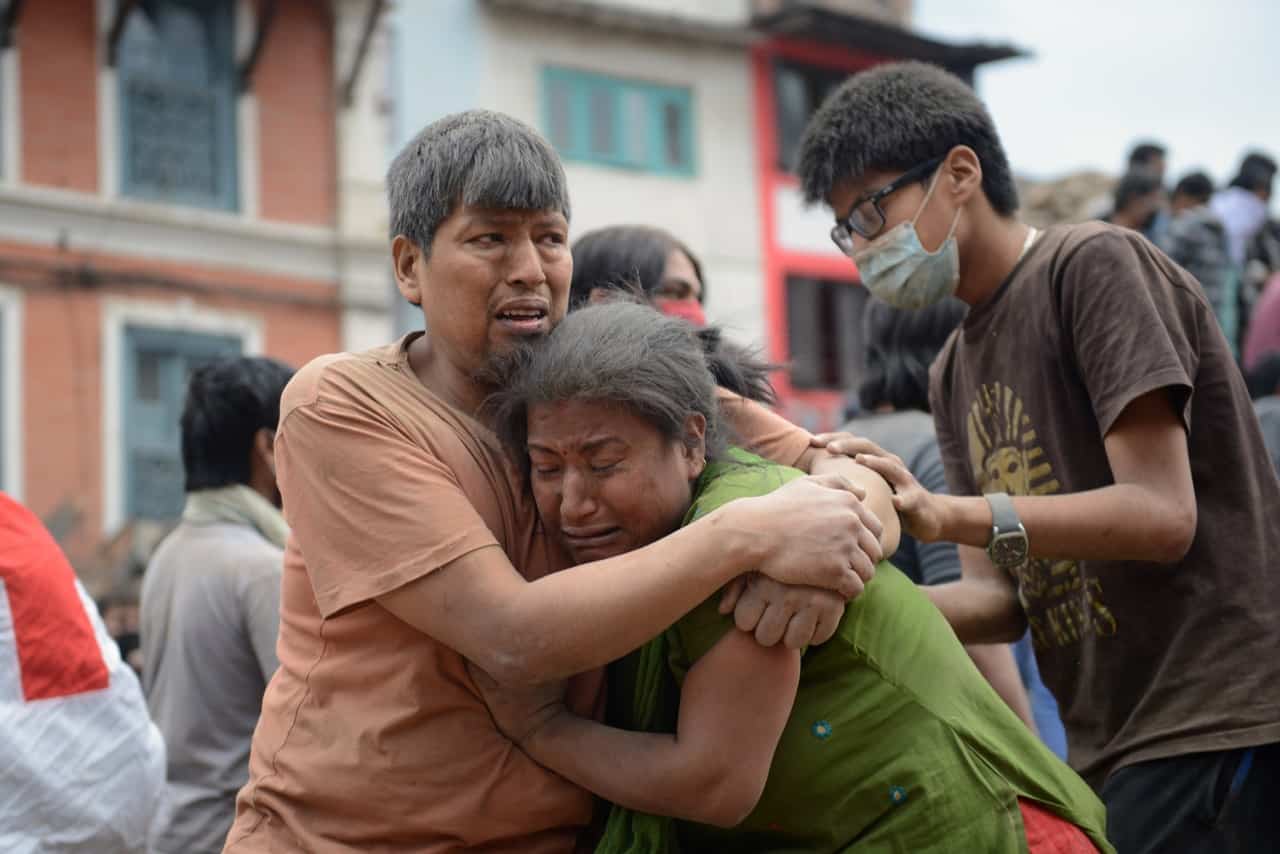 A Nepalese man and woman hold each other in Kathmandu's Durbar Square, a UNESCO World Heritage Site that was severely damaged by an earthquake on April 25, 2015. A massive 7.8 magnitude earthquake killed hundreds of people April 25 as it ripped through large parts of Nepal, toppling office blocks and towers in Kathmandu and triggering a deadly avalanche that hit Everest base camp. (Prakash Mathema/AFP)

The Nepali government has upped the death toll from Saturday’s quake to 1,805, with at least 4,718 injured.

“We do not yet know the scope of the damage, but this could be one of the deadliest and most devastating earthquakes since the 1934 tremor which devastated Nepal and Bihar,” said Jagan Chapagain, Asia/Pacific director of the International Federation of the Red Cross and Red Crescent Societies (IFRC).

KATHMANDU, Nepal — A massive 7.8 magnitude earthquake killed more than 900 people Saturday as it ripped through large parts of Nepal, toppling office blocks and towers in Kathmandu and triggering a deadly avalanche that hit Everest base camp.

Officials said at least 876 people are known to have died in Nepal, making it the worst earthquake there in more than 80 years.

But that the toll could be much higher, and more than two dozen people were also reported killed in neighbouring India, China and Bangladesh.

“The toll from the earthquake has jumped to 876, including 524 from the Kathmandu valley,” said police spokesman Kamal Singh Bam.

“Rescue efforts are still under way. We fear that the toll might rise as we dig through the rubble.”

Emergency workers fanned out across the Himalayan nation to rescue those trapped under collapsed homes, buildings and other debris.

“Deaths have been reported from all regions except the far west. All our security personnel have been deployed to rescue and assist those in need,” Bam told AFP.

Officials said 10 people were killed when an avalanche buried parts of Mount Everest’s base camp in Nepal where hundreds of mountaineers have gathered at the start of the annual climbing season.

“We don’t have the details yet, but 10 have been reported dead so far, including foreign climbers,” Gyanendra Kumar Shrestha, an official in Nepal’s tourism department, told AFP.

“An avalanche from Mt. Pumori has hit the base camp, burying a part of it,” Shrestha said earlier.

“We are trying to assess how many are injured. There might be over 1,000 people there right now, including foreign climbers and Nepalese supporting staff.”

AFP Nepal bureau chief Ammu Kannampilly, on an assignment to Everest together with a colleague, was among those caught up in the chaos.

“We are both ok…snowing here so no choppers coming,” she said in an SMS on approach to base camp. “I hurt my hand – got it bandaged and told to keep it upright to stop the bleeding.”

Experienced mountaineers said panic erupted at base camp which had been “severely damaged,” while one described the avalanche as “huge.”

But the worst damage was reported in Kathmandu, where the historic nine-story Dharahara tower, a major tourist attraction, was among the buildings brought down.

At least a dozen bodies were taken away from the ruins of the 19th-century tower, according to an AFP photographer who saw similar scenes of multiple casualties in other parts of the city.

“It was difficult to breath, but I slowly moved the debris. Someone then pulled me out. I don’t know where my friends are,” Dharmu Subedi, 36, who was standing outside the tower when it collapsed, said from a hospital bed.

At least 34 people were known to have died in India, including 23 in the eastern state of Bihar, while buildings in the capital New Delhi had to be evacuated.

The United States Geological Survey said the shallow quake struck 77 kilometres (48 miles) northwest of Kathmandu at 0611 GMT, with walls crumbling and families racing outside their homes.

“The walls of houses have collapsed around me onto the road. All the families are outside in their yards huddled together,” an AFP reporter said in Kathmandu.

Another resident, Anupa Shrestha, recounted scenes of panic and mayhem, saying “everything started shaking, everything fell down.”

The quake tore through the middle of highways in the capital and also caused damage to the country’s only international airport, which was briefly closed.

Kari Cuelenaere, an official at the Dutch embassy, said the impact had swept the water out of a swimming pool at a Kathmandu hotel where Dutch national day was being celebrated.

“It was horrible, all of a sudden all the water came up out of the pool and drenched everyone, the children started screaming,” Cuelenaere told AFP. “Some parts of the city fell down, there was dust rising… There were many (rescue) helicopters.”

Aftershock tremors could be felt more than two hours after the initial quake.

USGS initially measured the quake at 7.5 magnitude and later adjusted it to 7.8, with a depth of 15 kilometres. It said in a predictor graphic that there was a 17 percent chance the quake could claim more than 100,000 lives.

India dispatched two military transport planes to help with the rescue and relief efforts and there were similar offers from around the region, including Sri Lanka and Pakistan.

“We are in the process of finding more information and are working to reach out to those affected, both at home and in Nepal,” Indian Prime Minister Narendra Modi said in a tweet.

China’s official Xinhua news agency said that two people, including an 83-year-old woman, were killed in the Tibet region.

The earthquake was also felt across large areas of Bangladesh, triggering panic in the capital Dhaka as people rushed out onto the streets.

In the garment manufacturing hub of Savar, on the outskirts of Dhaka, at least 50 workers were injured after the quake set off a stampede in a garment factory, according to the private Jamuna television.