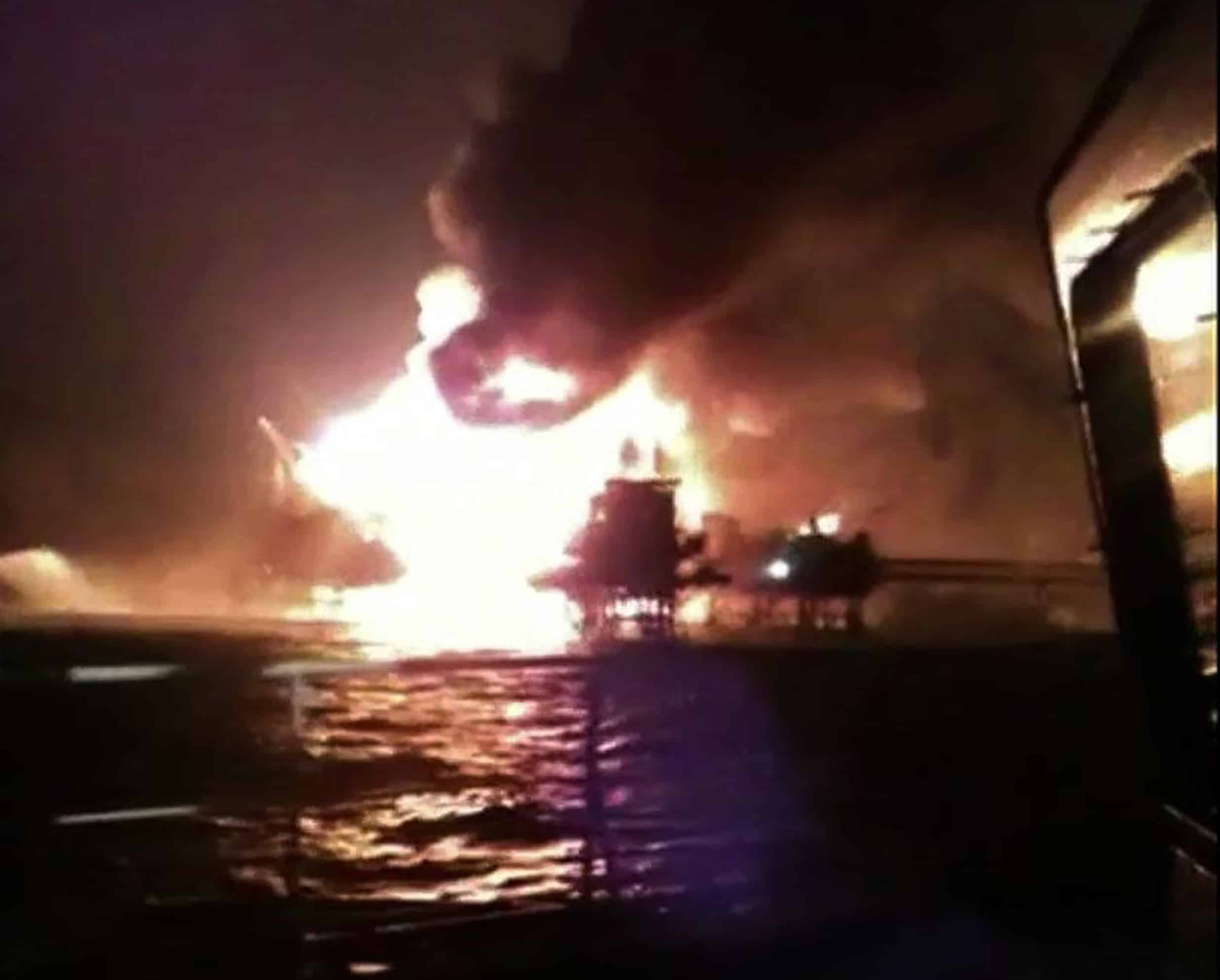 A screen grab from a video released by Diario Campeche Hoy of the Abkatún A-Permanente platform on the Gulf of Mexico's Campeche Sound on April 1, 2015. (AFP PHOTO/DIARIO CAMPECHE HOY/HO)

MEXICO CITY – An explosion and a fire erupted on an offshore oil platform operated by Mexico’s Pemex on Wednesday, killing at least four workers, injuring 16 and forcing 300 to be evacuated.

Eight firefighting vessels were battling the raging blaze at the Abkatún A-Permanente platform on the Gulf of Mexico’s Campeche Sound, the state-run firm said in a statement.

The blast took place at 3:40 a.m. in the dehydration and pump area of the platform, located off the coast of eastern Campeche state, the ASEA energy safety agency said in a separate statement.

Some 300 workers were taken to other platforms in the area while the injured were transported to Pemex’s general hospital in Ciudad de Carmen. Two were in serious condition.

Pemex and ASEA officials told AFP that the navy and company workers were still battling the blaze after midday, and that the fire must be controlled before authorities can check whether it provoked an oil spill.

AFP obtained a video taken from a boat showing huge flames and smoke engulfing much of the platform in the middle of the night.

“Regrettably, the death of four workers in the accident on the Abkatún A-Permanente platform has been confirmed,” Pemex wrote on its Twitter account, raising an earlier toll of one dead contractor from the Cotemar company.

“The priority in this emergency is to protect the safety of personnel, contain the fire and care for the injured,” the ASEA agency said, adding that all the workers were removed from the rig.

ASEA said it would lead the investigation into the cause of the incident to determine the actions needed to ensure industrial safety.

The Campeche Sound, some 85 kilometers from the coast, contains the two biggest shallow-water oil deposits in Mexico, with 200 platforms extracting 78 percent of the country’s crude.

The fire is the latest incident to hit the state oil firm in recent years.

In 2007, two Pemex platforms collided in the Gulf of Mexico, killing 21 workers and causing a large oil spill.

In January 2013, a gas buildup caused an explosion at the company’s Mexico City headquarters, killing 37 people.

A natural gas plant explosion killed 30 people near the northeastern state of Tamaulipas in September 2012.

Pemex, which provides a third of Mexico’s tax revenue, posted a $17.7 billion loss in 2014, hit by falling global oil prices, fuel thefts by gangs and the peso’s drop against the dollar.

The government will hold its first auction in July for shallow-water projects on the Gulf of Mexico.