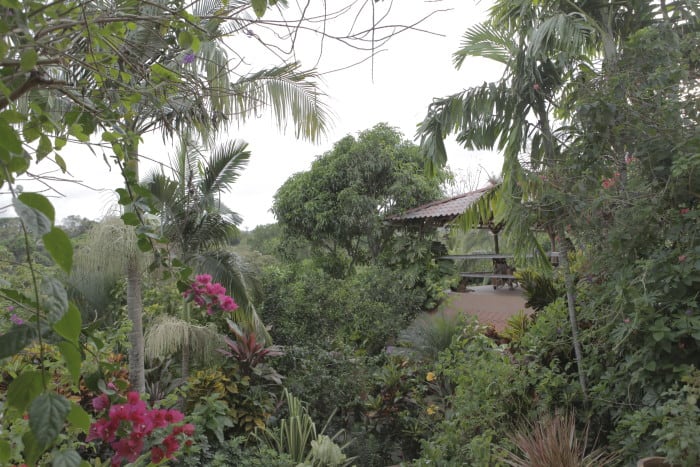 When National Geographic first acknowledged Atenas for having the best weather in the world (or el mejor clima del mundo as you’ll see plastered across buses passing by), they — perhaps inadvertently so — opened the floodgates to shivering North Americans. Today Atenas holds the distinction as the second-most extranjero-populated city in Costa Rica behind San José suburb Escazú, and it’s easily apparent during a walk through the town of approximately 8,000.

Coming from Ciudad Colón, Atenas struck my wife Melanie and me as an easy overnight destination. What little reading we did won us over. Simply put, it seemed nice enough.

Historically speaking, Atenas is off the camino de carretas (oxcart trail) — a route created in 1843 to carry coffee beans out of Central Valley to Puntarenas and Limón. The name, which some might recognized as “Athens” in English, allegedly comes from José Rafael Gallegos Alvarado, the region’s chief of state in 1833, and his admiration of Greek culture. Historians, however, aren’t so sure about the story.

First we stopped by Eden Atenas, our bed and breakfast for the night off Calle Mimi — a gravel-covered road just a couple of kilometers outside of the town center. Despite the overwhelming presence of North Americans, Atenas is not overrun with hotels and hostels. This still very much has the feel of a Tico town. That is to say it has an impressive public park anchored by an architecturally interesting church, and surrounded by a variety of restaurants and shops. This was clear even in the short cab ride around town to our bed and breakfast.

The history of Eden Atenas stretches back to 2001 when owner Jan first arrived with her then-husband and two girls to start working on the property. She returned to her native Canada in 2005 while renting out the property. In 2011, Jan came back for a three-month visit to the property with Avtar, a given name from a guru in India meaning “incarnation of God.” They returned permanently in 2012 to renovate the family house into a guest house, officially opening the bed and breakfast in the spring of 2013.

Avtar met us at the driveway with two loveable German Shepherds behind what looked to be a freshly painted blue gate. He had the look of a much taller Wolf Blitzer with his grayish-white hair connecting into a full beard. Except Avtar’s passion is not in holograms and missing Malaysian aircrafts, it’s in taking care of and showing off the property’s impressive gardens. He was happy to offer a tour. But first he offered an explanation of Atenas’ reputation of having the best climate in the world.

“You’re probably going to think this is bullshit,” he admitted, before continuing to explain how if you follow the wind currents, it points to a large palm tree within their property as the epicenter of the world’s best climate. My journalistic mind blanked on a meteorology follow up.

Avtar then began to lead us around the sprawling property, following a mixture of dirt, gravel and paved paths. Cuban royal palm trees, ginger, bananas, pineapples, cas, tangerines, papayas, and kumquats are just a small sampling of the botanical garden-esque surrounding Eden Atenas. Biblical scholars would have to wonder just how Adam screwed it all up so badly if the supposedly real Eden was half as lively.

This work was no easy feat. When Avtar and his wife Jan moved from Canada, the property was a modest farm. What we saw was twelve years in the making, including various buildings and rooms that have been added on over time. Avtar also explained that five months out of the year outside of tourist season, Eden Atenas serves as an “experimental community.” He described it as a less stereotypical version than what the Paul Rudd, Jennifer Aniston film Wanderlust presents.

Back at the building, we met a couple from Australia who shared that they just finished a 21-day water fast in Guanacaste.

“We wanted to get healthy the healthy way,” the man explained, who unsurprisingly supported a similar frame as Moby. The experience sounded truly awful, but their spirits were the opposite.

Hungry, Jan was kind enough to offer us a ride into town, leaving us just a couple blocks away from Balcón del Café, an enjoyable lunch spot with — as the name suggests — balcony seating. The menu featured a mixture of traditional Tico, though no casados, and German food. My German breakfast with sunny side up eggs with cheese and delicious toast hit the spot. Melanie opted for a chicken sandwich “sin mayonesa,” but as we’ve learned over the past six months, mayonnaise still has a solid 80 percent chance of making an appearance. This was no exception, but the blackberry fresco natural more than compensated for the error.

Following lunch, we went for a brief jaunt around the town square. A young Tico became immediately enamored — or perhaps curious — by our camera, chasing behind with a beaming smile and dance moves reminiscent of Chris Farley’s “Maniac” performance in Tommy Boy. A woman, probably his mother, followed behind laughing as we joked about him growing up to be either a professional dancer or model. After corralling the little boy, an older man sitting at a nearby bench called over.

“Hombre! Habla inglés?” he hollered in a distinctly North American accent. It was the most English interpretation of Spanish I’ve heard in Costa Rica.

“¿Cómo?” I replied in a joke that went soaring over his head.

He waved me over, wanting to share something with me.

“You know there a lot of people here who would like to take that camera out from under you,” he said, dressed like a Santa Claus hybrid of a southern gentleman. He could barely get through the warning without my eyes beginning to roll.

“Oh, thanks,” I replied. “But we live here, have been around the country and Central America. Everything’s been fine.”

“Okay, just letting you know. Someone was killed over one of those a week ago, and I’ve been pickpocketed myself.” His Canadian friend sitting on the other end of the bench nodded along in agreement.

Perhaps I read it wrong, but it felt more like a “beware of those people who look different” warning than anything backed up by, y’know, reality. After all, I’ve never felt the need to exercise any extra caution throughout my Central American travels than I would back home.

Wishing them a good day, I walked back to Melanie, who herself heard him mumble, “That’s what I get for being a good samaritan.”

This interaction epitomized the ugly gringo stereotype for me that seemed more visible in Atenas than anywhere else. There was an inherent suspicion of Ticos lurking, as if they should have to present themselves and behave like the North Americans who have decided to relocate here. Then again, history is full of people relocating only to tell the locals they’re doing it wrong. I guess Atenas is just another chapter in Encyclopedia Intolerant.

That said, Atenas itself struck us as perfectly lovely. It was ultimately very easy to see why people live there. Despite Coronel Claus’ fear, our encounters with Ticos in the area were very pleasant. Besides the aforementioned dancer, there were two gentleman we chatted with over breakfast at Eden Atenas who themselves were visiting from Heredia. I had previously helped them with directions to the bed and breakfast when Avtar handed me the phone to help his Spanish. They, as most Ticos have, offered their favorite corners of Costa Rica.

Our afternoon was spent meticulously studying this “best climate in the world” claim the only way I know how — hammocking. Drifting in and out of consciousness over a couple of hours as a comfortable, light breeze brushed past me every so often, I can comfortably report that Atenas makes a strong argument.

Eventually we decided to make our way down past the pool and over to the patio with an outdoor kitchen and seating area overlooking the impressive gardens. Avtar and Jan had already been enjoying the view when we joined the conversation. If you enjoy a healthy dose of Latin American revolutionary discussion, you’ll find more than a prescription’s worth in talking to Avtar.

The night ended with a couple of beers and plates of arroz con pollo at El Tronco, an open-air restaurant on the outskirts of Atenas, but just down the one-kilometer stretch of Calle Mimi from Eden Atenas. We chatted briefly with our waiter, whose wide smile looked as if he had just won the lottery. It was perfectly pleasant way to end our overnight in a town worthy of its reputation.