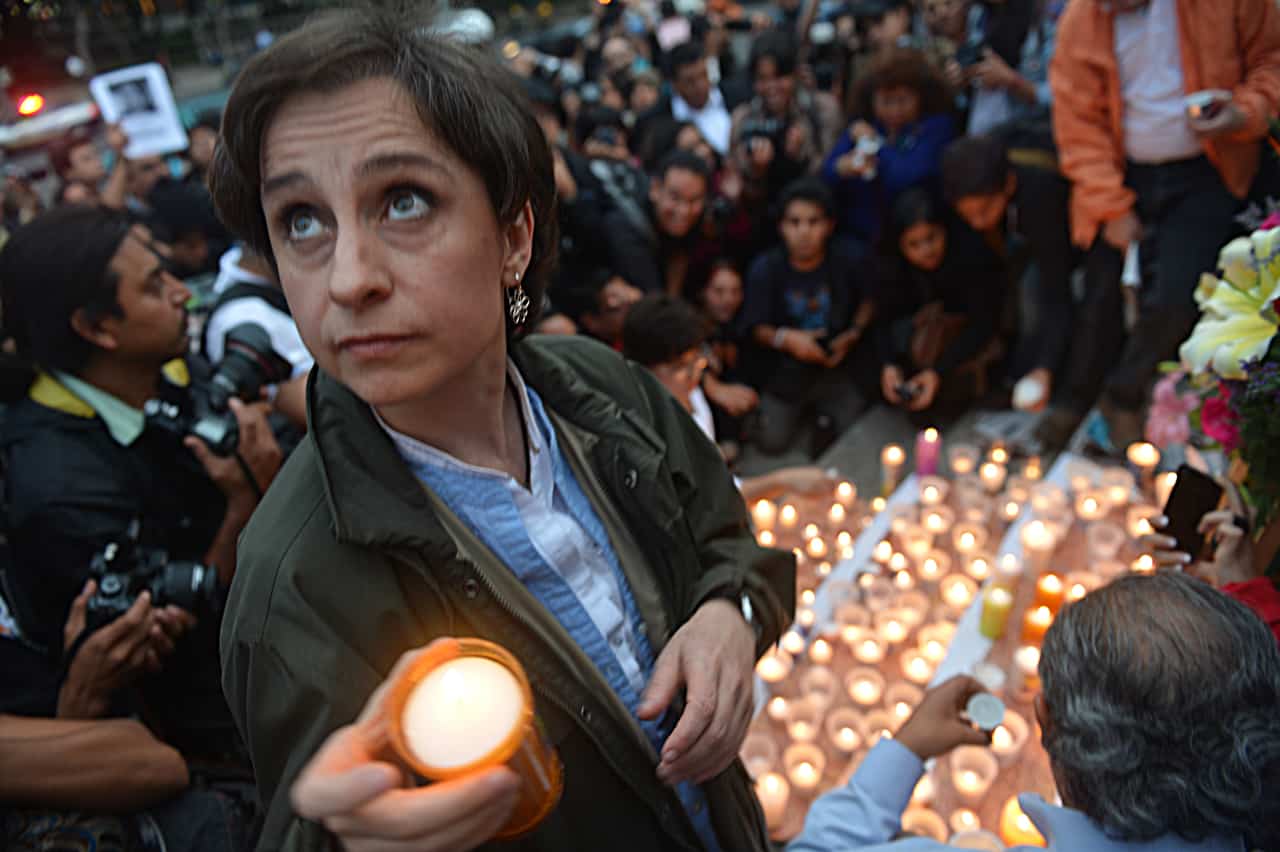 Mexican journalist Carmen Aristegui places a candle on an altar erected at the Independence Angel monument in Mexico City on May 5, 2012 during a vigil to protest against violence towards the press. (Yuri Cortez | AFP)

MEXICO CITY, Mexico — An influential Mexican broadcast journalist whose report about the first lady’s mansion caused a scandal was sacked Sunday, sparking anger among supporters who called her firing an affront to freedom of speech.

Carmen Aristegui had been publicly feuding with her employer, MVS Radio, in recent days after two of her investigative reporters were fired by the company.

She complained about the dismissals on the air Friday, demanding that her colleagues be reinstated and lamenting about an “authoritarian wind” in the country.

MVS said the two journalists had been fired for using the company’s name without permission in their participation in MexicoLeaks, a website created by civic groups and other media outlets to receive leaked documents showing acts of corruption.

MVS said Sunday that it parted ways with Aristegui because she had conditioned her staying with the broadcaster on the company reinstating the two reporters.

In a statement, MVS said it could not allow one of its collaborators to “impose conditions and ultimatums on the administration.”

The story sparked allegations of conflict of interest, which the president denied, adding more headaches to Peña Nieto as he faced protests over the presumed massacre of 43 missing college students.

On Friday, Aristegui said her two fired colleagues had been investigation a house Finance Minister Luis Videgaray bought from a government contractor as well as the alleged summary execution of gang suspects by soldiers.

Peña Nieto’s spokesman could not be reached for comment about Aristegui’s sacking.

Her supporters swiftly voiced their discontent on social media, with the hashtag #InDefenseOfAristegui2 (#EndefensadeAristegui2) becoming the top trending topic on Twitter in Mexico.

“Carmen Aristegui is an essential voice in our public life. Her departure from MVS seriously damages freedom of speech in Mexico,” leading historian Enrique Krauze wrote on Twitter.

“What sadness that from tomorrow @AristeguiOline will not have a space in this country that demands plurality and voices that challenge us,” Luna tweeted.

Leftist Senator Alejandro Encinas called it a “hard blow for the kind of journalist our country needs.”

The radio station’s website was briefly hacked on Saturday, with a message apologizing for the firing of Aristegui’s two journalists.

Aristegui, who also works for CNN’s Spanish-language channel, was already fired once before by MVS during her six-year stint at the radio station.

In 2011, she was let go after demanding a government reaction after a lawmaker accused then president Felipe Calderón, without proof, of having a drinking problem.

MVS said she had been fired for violating ethics, but she claimed that her sacking stemmed from pressure from the presidency.

This time around, MVS said it “fully exercises freedom of expression” and would continue to provide critical coverage, but that it could not tolerate “individualistic attitudes” from employees.