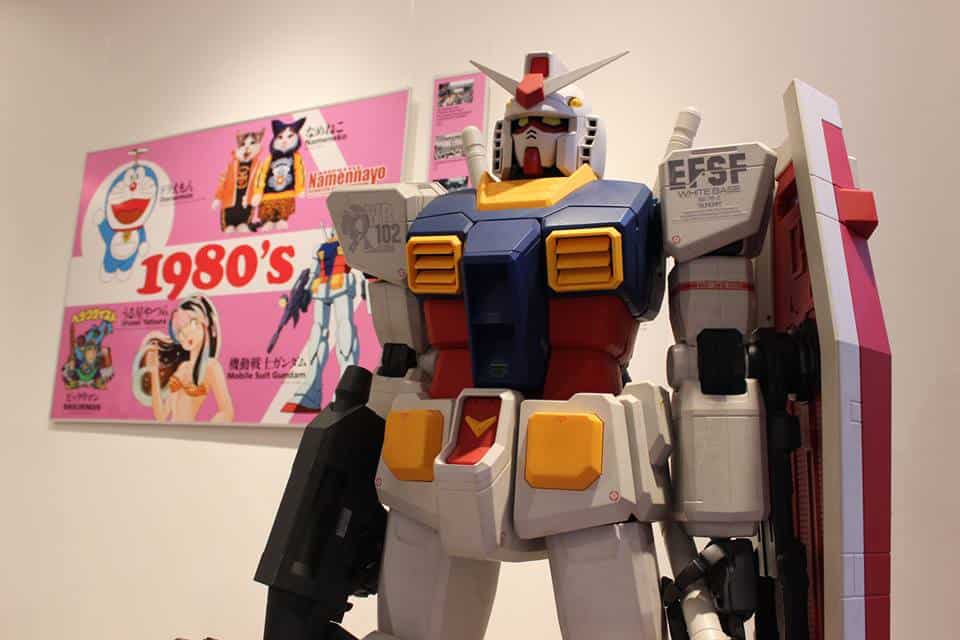 To properly introduce “Japan: Kingdom of Characters,” the new exhibit at the National Gallery, here’s a quick anecdote.

Many years ago, I had the chance to spend a few days in Osaka, Japan. On the first morning, I ended up lost inside a building: I exited a train, entered a mall, took an elevator to a patio, realized that the patio was actually 20 stories above the street, and re-entered the elevator. When the doors opened, they revealed a toy store.

The store was vast, with a low ceiling and deep interior, giving the illusion that its aisles extended forever. As I tromped down the tile floor, trying to find an exit, I started passing familiar faces: Hello Kitty stickers and lunchboxes, Sailor Moon DVDs, Pokémon gadgets, Dragon Ball Z storybooks, and thousands of other items. Then I saw it: a one-meter statue of Voltron, the giant robot hero of “Voltron: Defender of the Universe,” displayed prominently in the middle of the store.

I had not seen “Voltron” since I was a kid, and had in fact forgotten that “Voltron” existed. Like most “anime” – the universal term for Japanese animation – “Voltron” had a concept too bizarre to properly summarize, but basically Voltron was a gigantic robot constructed out of smaller space-pods that looked like lions. The pilots of these space-pods were people dressed in aerodynamic costumes, and when they linked together, they created a super-warrior that fought other leviathans on distant planets.

As a North American male raised in the ’80s and ’90s, I felt the same nostalgic vertigo walking into the “Kingdom of Characters” exhibit: Whether you know it or not, whether you like it or not, Japanese television permeates airwaves on nearly every continent, shaping entire generations of children. Wherever there is mainstream media, there is Japanese pop culture. Nearly everyone under the age of 40 can describe what “Power Rangers” is, regardless of whether they have ever seen an episode. Generation X needs no placards to identify most of these characters: We already know who “Astro Boy” and “Ultraman” are, if only through osmosis.

The exhibit in San José is designed to celebrate 80 years of diplomatic relations between Costa Rica and Japan, two small nations that have no significant armed forces and have become wildly more successful than their neighbors. But it’s also an excuse to display some nerdy toys and posters. As the well-designed exhibit program explains it: “The history of Japan might be seen as a history of the Japanese love for characters… It’s as if the characters are our friends, the heroes we long to be, and our lovers.”

Awkward as that sounds, I feel that it’s an accurate translation. Entire dissertations have been written about the sociology of anime, the way that Japanese heroes and villains reflect national preoccupations. It is no surprise to see a high-tech culture like Japan imagining humans encased in humanoid robots – as if obsessing over the fusion of flesh and machine. Nor is it shocking that the first nation victimized by nuclear weapons should produce 28 “Godzilla” movies, the saga of a mutated lizard destroying civilization.

But those are extreme examples, and the “Kingdom of Characters” exhibit isn’t interested in these subcultures. Instead, the curators objectively describe the broad cross-section of people interested in cartoon heroes. In one photo, a businessman reads a manga comic book during his work break. In another, a middle-aged professional wears a plastic belt and poses on the roof of his office. A corner of the exhibit recreates the bedroom of a Japanese girl, which is packed with bright colors and plush toys. You might guess it’s the room of a four-year-old, but cardboard cutouts shows an obviously teenaged model. (Courtesy of The National Gallery)

One of the exhibit’s triumphs is its diverse sampling: You can usually recognize anime for its consistent visual style, but as “Kingdom of Characters” demonstrates, the genre is more than big eyes and split-screens. Japanese pop culture has its share of endearing junk (“Pokémon,” “Power Rangers”) and outright masterpieces (“Akira,” “Spirited Away”), but the range of imagination has inspired billions of consumers around the world, and despite the many shared motifs, no two franchises are exactly the same.

It may seem peculiar to celebrate diplomatic relations with pictures of “Galaxy Express 999,” but unlike the United States, Costa Rica doesn’t have a complicated cultural relationship with Japan. It was not Costa Rica that sent Commodore Perry to force open Japanese ports, nor the Costa Rican military that fought bitterly with Japanese soldiers on distant islands. But passively enjoying Japanese pop culture over the course of years? Rooting for mechanized heroes invented an ocean away? That’s something worth commemorating.